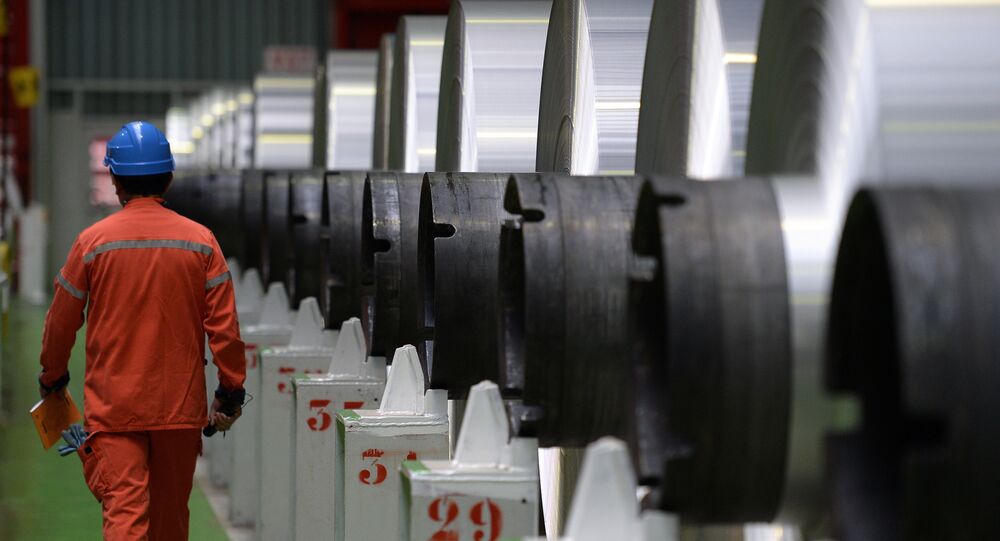 © AFP 2021 / WANG ZHAO
Chinese Central Bank Mulls Issuing Own Digital Currency
Kristian Rouz — The world's biggest metals producers have all suffered losses in profits throughout 2015 and early this year amidst China's industrial stagnation and lingering factory-gate disinflation. However, as the People's Bank of China (PBOC) ramped up monetary stimulus via additional liquidity injections in early 2016, the subsequent financial and, presumably, overall economic stabilization might help international mining companies in the medium-term. However, as gold prices resumed their retreat against a background of dropping volatility in stocks and high-yield debt, and with demand for safe-haven assets waning, the first half of this year is likely to remain murky for metals markets.

Anglo American Plc, one of the world's top miners, reported a net loss of $5.62 bln in 2015, compared to earlier projections of almost half that amount for the same period, thus exacerbating concerns among metals traders. The heavily indebted Johannesburg/London-based metals producer announced it would sell at least seven more mines in an attempt to raise roughly $6 bln from potential deals.

As mining assets, including ore extraction facilities, lose value, however, the capital squeeze might eventually pose a heavier risk to Anglo's financial performance, jeopardizing its ability to service its debt.

The enterprise is hoping to sell its South African iron ore branch, along with its international coal-producing assets. These aspirations are a massive negative factor and weigh heavily on global metals prices, with futures contracts on copper, the benchmark for industrial metals, already just above their 52-week low at $207.07/lb (their 52-week trading range is between $193.55/lb and $294.25/lb). However, Anglo's plans to concentrate on diamonds and platinum production might only trigger a sell-off in safe-haven metals, with markets anticipating an increase on the supply-side.

"We of course recognize the current challenging environment in which to deliver disposals," Anglo CEO Mark Cutifani said. "While we have accelerated our disposal processes, and given our targeted positive free cash flow and our robust liquidity position, we will take appropriate time to secure value."

However, market expectations of Anglo's fund-raising efforts are lower, at $3 bln to $4 bln in gains throughout 2016, as the asset selloff is likely to impair the profitability of upcoming deals.

© REUTERS / Reinhard Krause/Files
Sitting on a Mineral Mine: North Korea Hopes Rare Metals Win Over Investors
Meanwhile, in Australia, one of the world's top metals exporters, where the lion's share of copper exports are to mainland China, the local mining enterprise Newcrest also reported having suffered a 55% loss in earnings in the second half of 2015 due to falling gold and copper prices, posting 81 mln AUD compared to 180 mln AUD in the second half of 2014.

Metals, including gold and copper, have been falling in price since 2013, after the US Federal Reserve announced and later implemented policies aimed at tightening domestic monetary conditions, triggering a revaluation of the dollar for the first time since the early 1980s. Meanwhile, as China is struggling to put its heavily industrialized, exports-oriented economy back on track amid unfavorable financial circumstances, the falling demand for metals has spurred the decline in prices.

The Chinese situation is showing signs of improvement, with M2 money supply rising 14%, and the total volume of new loans issued topping 2.51 trln CNY (compared to 1.9 trln CNY expected earlier). However, given that the PBOC enacted wider stimulus measures earlier this year, the abundance of money liquidity does not guarantee the government-anticipated resurgence in the nation's faltering industrial production.

With Asian shares rising, led by China's optimistic data, most of the aforementioned capital might end up in the stock market or flow overseas via the Shanghai-Hong Kong Stock Connect scheme.

However, metals might perform better, should the Chinese-perceived risks fade due to Beijing's efforts. Besides, as crude oil prices have risen to $35/bbl in London, the appetite for buying may return to commodities markets. Still, the outlook on global industrial production still looks bleak, casting a shadow on metals trading: it's no longer a buyer's market, but rather a supply-side determined situation.