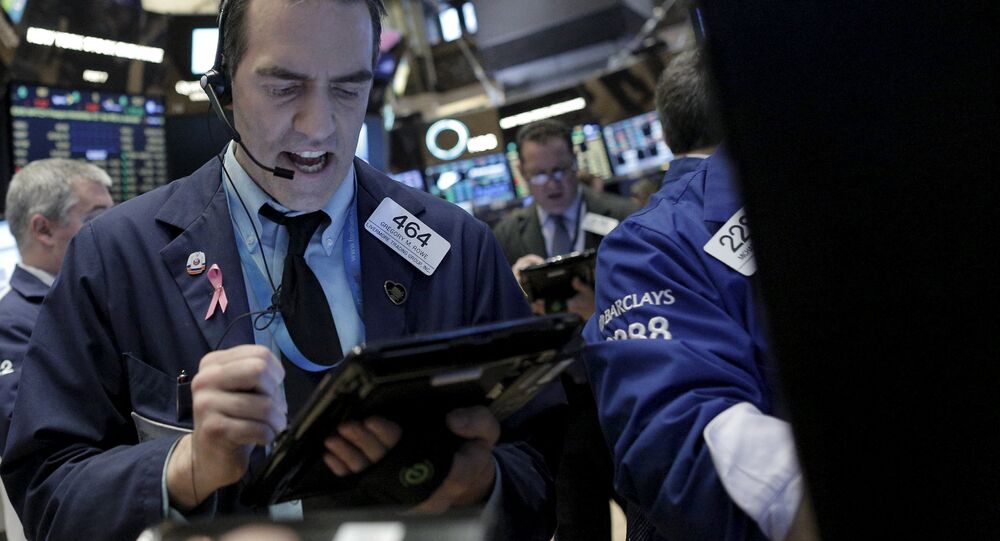 Having initially planned four consecutive hikes in US base borrowing costs throughout 2016, totaling a 1% increase, the US Fed might be only able to perform three hikes of 0.25% each by late 2017 as GDP, inflation and the employment outlook are becoming less certain amidst the financial markets anxiety.

Kristian Rouz — The US Federal Reserve, having initially planned to hike the base interest rate four times over 2016, is likely to now take an even more cautious approach. As the economy slows and concerns rise in the open market, the regulator is expected to leave its current rates in place, only performing three one-time hikes over the course of the next two years. While 2016 might see the slowest pace of growth in the US compared to the more robust expansion recently, the Fed might raise borrowing costs only once, and the projected moderate acceleration in 2017 might allow for two more hikes that year.

© AP Photo / Mary Altaffer
Fed Rollback in Line? Wall Street Plunge Re-Awakens Interest Rate Debate
The ongoing volatility in financial markets across the globe, affecting Wall Street performance in stocks and high yield, has generated prominent risks to the pace of US economic expansion, meaning the odds of the Federal Reserve raising interest rates anytime soon are now much lower than December's expectations. Now that the March rate hike is put into question, the Fed's total plan of four consecutive hikes to be implemented throughout 2016 may be wrapped up.

Currently, US borrowing costs stand at 0.25-0.50%, and the ongoing Federal Open Market Committee (FOMC) meeting is likely to leave the rates unchanged. The official statement is due later today.

However, should the economic growth in the US exceed the now-expected 0.8% in Q4 2015 (the official estimate is due on February 12), the Federal Reserve might still want to move rates in March. Therefore, the FOMC statement is likely to deliver cautious wording, causing little to no effect on the dollar's FX rate, stocks and bonds.

"This would constitute a moderate acknowledgement of risks that avoids shutting the door to a March hike," David Mericle of Goldman Sachs said.

Generally, the Fed's more dovish approach to its tightening plans would mean a weaker dollar and a moderate rally in US stocks in the short-term, with benchmark 10-year Treasury yields falling, ensuring more market stability. Given that the US financial markets are currently in turmoil, and the ever-strong dollar hitting corporate America's earnings, dovishness is what the Federal Reserve might opt for. Especially so after the high-yield and stock meltdowns seen in December and January have stirred widespread speculation over whether or not the market turbulence was immediately triggered by the hike in borrowing costs on December 17.

Meanwhile, US forward interest rates place the late 2017 borrowing costs at 1.30% (compared to the current 0.25-0.50%), which is only approximately three full 0.25% steps from the current rate. Either the market expects only three hikes through to late 2017, or the regulator might opt to adjust its policies on an ad-hoc basis, raising and lowering interest rates in accordance with movements in inflation and other economic fundamentals. Such erratic behavior would, however, diminish the market's trust in the Fed.

© Flickr / Stefano Brivio
Whither the Fed? Post-Hike Pessimism Demands Better Risk Management
On December 16, the two-year forward outlook on rates stood at 1.72%, and the regulator's plan of four consecutive hikes in 2016 mostly coincided with market anticipations.

Even before the massive 8% slide of the S&P 500 Index earlier this year, most investors were betting on only two Fed hikes in 2016, considering that cheap oil and weak inflation were the main challenges to policy tightening. But the stock-price crash has made the outlook murkier.

The market thinks there is a 30% chance of a rate hike in March. Meanwhile, US core consumer prices picked up due to stronger labor market performance, brightening the overall inflation outlook, but cheaper fuel is still a threat to any acceleration in this regard.

Generally, the Federal Reserve is likely to take their time watching the macro indicators, with their eyes on GDP growth, inflation and employment. Yet, such a strategy did not exactly pay off in December, when the Fed neglected the Third Avenue crash earlier that month and moved on rates, likely contributing to the subsequent anxiety.