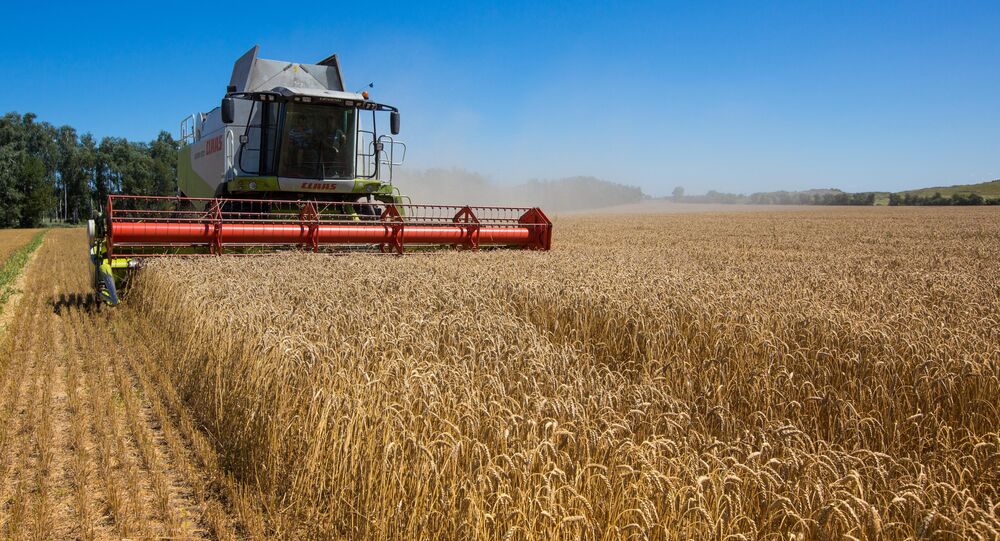 Analyzing Ukraine's deteriorating economic situation, Russian journalist and economic analyst Alexandr Sitnikov suggested that instead of gloating over the impact falling oil prices have had on the Russian economy, Kiev should hope that prices rise, since this would be their only chance to revive their own export-oriented economy.

"The 'barrel' pulls the 'bushel' along with it. That is the logic of world commodity markets," the journalist explains, in a recent analysis published by independent Russian newspaper Svobodnaya Pressa. "Only upheavals in oil-producing areas and crop failures in major agricultural countries are capable of breaking the connection."

Moreover, "in terms of their dependence on commodities, the Russian and Ukrainian economies resemble one another, like twins. The difference is that our major export product is oil, and that of our neighbors – wheat."

© REUTERS / Stefan Wermuth
Eye of the Storm: Oil Price Speculation Led to 'Classic Financial Collapse'
"In the past two years," Sitnikov recalls, "hydrocarbon [prices] have fallen much more steeply than cereals. So, on January 21, 2016, the price of Brent crude on the ICE Futures Exchange fell to below $28 a barrel, while a year ago, a barrel sold for $60, and two years ago, for $105. In other words, oil has seen a depreciation of nearly 75%. The average price of cereals in 2014 decreased by 12.5% compared to the previous year, and in 2015, by another 15.4%. In total, over the past two years, the price of cereals fell by about a quarter."

"Russia's GDP over these two difficult years has fallen by 3.6%, while Ukraine lost more than 20% of its GDP. And although a number of international institutions, including the IMF, predict that Ukraine will win back 2% this year, skeptics, on the contrary, predict further decline."

"The fact," Sitnikov suggests, "is that our neighbors face processes reminiscent of the crisis faced by Argentina after the default in 1999. But at that time the global macroeconomic picture was much healthier than it is today."

© AFP 2020 / MANDEL NGAN
Kiev Expecting $10 Billion From IMF, International Partners in 2016
To make matters worse, the analyst suggests that Kiev's economic incompetence has only worsened the country's prospects, depriving them of credit needed for economic development. "Simply put," Natalia Yaresko and the Ministry of Finance, by "taking the initiative to 'forgive the country's debts to others', have made a terrible mistake…UniCredit Bank analyst Andrey Prikhodko writes that 'access to public capital markets will be completely closed to Ukraine and Ukrainian companies over the next year.'"

"Furthermore, in accordance with the memorandum on the IMF's Ninth Economic Review, the organization will reduce its lending to Kiev by two thirds. Some funds will be forthcoming via the EBRD, but these are just crumbs. In other words, there is no money for development."

Sitnikov recalled that "in 2014, big business in the US and the EU was eager to revive Ukraine's economy as a warning to Putin. However, senseless acts of cruelty and intimidation by right-wing thugs in Odessa and the Donbass have scared off potential investors. Today, 'there is no sense speaking about queues of investors lining up to open factories in Ukraine', Prikhodko writes. 'The break in economic ties with the [rebel-held Donbass] did not bring any political dividends.'…Whatever Western politicians may say, foreign businessmen have said 'no' to Banderite xenophobia."

"The new authorities in Kiev simply did not have enough common sense to benefit from the 'demonization of Putin', which in 2014 had become state policy for the majority of the world's leading economies. Now, the Poroshenko/Yatsenyuk government does not even recall that nearly all of America's leading companies had once been willing to implement their own 'Marshall' plans in Ukraine. The fact that Ukrainians live much worse today than they ever did under [ousted president] Viktor Yanukovych is entirely the fault of the current political elite."

In these circumstances, Sitnikov notes, "Ukraine's economy will have to focus on the production and sale of its basic products – grains, oilseeds and ferrous metals. The problem is that the main buyers of Ukraine's agricultural sector are the oil-producing countries of the Middle East, which have introduced austerity in 2016."

© Sputnik / Andrey Stenin
Ukrainians Realize Futility of EU Free Trade, But It's Too Little, Too Late
"The EU, if it buys anything, does so only via quotas, and at low prices, tying the value of contracts to oil futures. China too cannot be relied upon due to its own slowdown. As a result, Kiev is suffering from the decline in oil prices even more than Moscow. For the record, in 2008, when oil prices fell as a result of the global economic downturn associated with the debt crisis, Russia's GDP fell by 7.8%, and that of Ukraine, by 14.8%."

Moving on, the analyst noted that "if we talk about metals, here again we find negative processes associated with the global excess in steelmaking capacity, which, according to Ernst & Young, reached 2.07 billion tons. In 2016, Ukrainian production, in all probability, will repeat the decline seen in 2014 and 2015, when production volume dropped by 17% and 16%, respectively."

Ultimately, citing the UniCredit Bank analysis, Sitnikov writes "that the situation in Ukraine will be able to stabilize only if the average price of a barrel of Brent oil sits at around $55.8. Only then, according to IMF estimates, is 2% GDP growth is possible…In short, Kiev should not gloat over the deterioration of the economic situation in Russia due to falling [energy] prices, and, figuratively speaking, should pray that the world oil market recovers."

© AFP 2020 / TARIK TINAZAY
A Tale of Two Monetary Policies: Russian and Turkish Central Banks Compared
"As far as Russia is concerned, we still have some 'fat' left over in the form of foreign exchange reserves. Moreover, there remains a 'ray of hope in the darkness', according to Chris Weafer of the consulting firm Macro Advisory. He notes that Russia's total external corporate debt fell to $500 billion in 2015, from $660 billion in mid-2014."

Furthermore, "authorities non-interference in the ruble exchange rate has allowed Russia to maintain gold reserves totaling $371 billion. In addition, devaluation has allowed the export-oriented Russian economy to compensate for the effects of falling commodity prices, and allowed the government to maintain a budget deficit of about 3% of GDP without borrowing. If this trend continues, already by 2018 Russia will see the first internal reserves for project development, without which any talk of import substitution would be worthless."

Ukrainians Realize Futility of EU Free Trade, But It's Too Little, Too Late