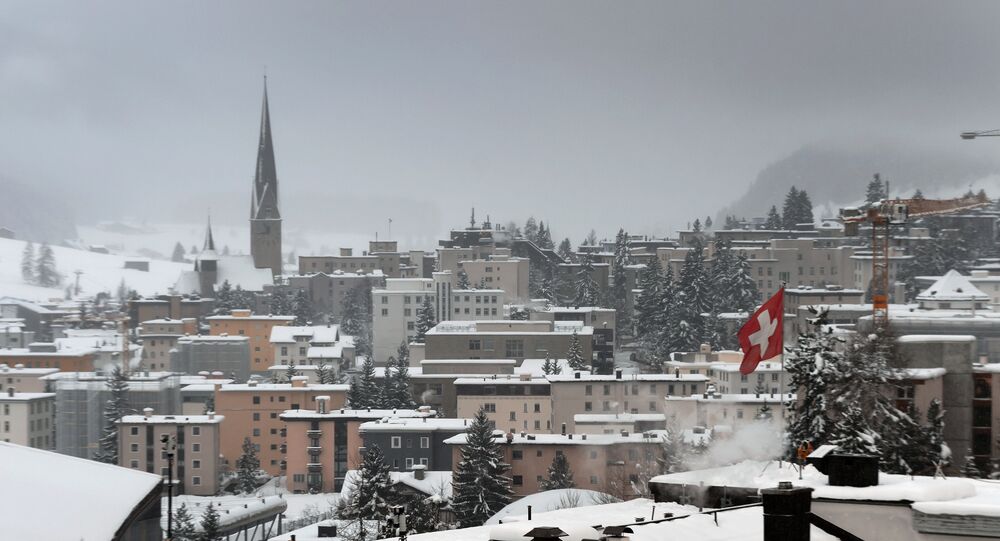 The 46th World Economic Forum (WEF) has wrapped up in the Swiss ski resort of Davos. Some 2,500 participants from some 100 countries, including the leaders of 40 states, gathered in Davos to discuss the most urgent international issues, including falling oil prices, anti-Russia sanctions and the prospect of Iran's return to the global market.

MOSCOW (Sputnik) — The main theme of the 2016 forum, which run from January 20 to January 23, was the Fourth Industrial Revolution.

© AFP 2020 / FABIO BUCCIARELLI
Hidden Aftermath of Oil Prices Slump Revealed
A slide in global oil prices made the forum's agenda on Wednesday, as WTI crude oil dropped to less than $28 a barrel, hitting the lowest levels since 2003, mostly because of a prolonged global oversupply and low demand.

One of the factors to influence oil prices is the removal of sanctions against Iran, although experts believe its importance is exaggerated.

On January 16, the European Union and the United States lifted oil and financial sanctions imposed on Iran after the International Atomic Energy Agency verified Tehran’s compliance with the nuclear agreement. Japan followed suit earlier on Friday.

Iranian Foreign Minister Javad Zarif expressed hope that oil prices should adjust after Tehran returns to the market as sanctions are lifted.

"I believe we have a share in the market which was removed from us. Now we have to return our share and the market has to adjust," Zarif told Sputnik on the sidelines of the forum.

Iranian President Hassan Rouhani's Chief of Staff Mohammad Nahavandian said that Tehran may contribute to the energy security of the European Union.

"Iran has the world's largest oil and gas resources. These resources can be beneficial for energy security, especially in Europe. In particular, new opportunities open for the development of gas projects, LNG projects," Nahavandian told Sputnik.

A number of forum participants predicted a rise in oil prices and the establishment of what they called a fair price.

Azerbaijani President Ilham Aliyev said that $60-70 a barrel would be an optimal price for both companies and for governments.

Executive Director of the Economic Development Board of Bahrain, Khalid Rumaihi said that the decline in oil prices was a "blessing" to help move to even more innovative form of development.

Nigerian Petroleum Resources Minister Emmanuel Ibe Kachikwu said that the OPEC cartel's extraordinary meeting may take place in early March, but the formal decision has not been made yet.

The organization had agreed to hold a meeting in case prices tumbled below $35 per barrel, the minister said, adding that OPEC is still split on the issue of taking action to stem the free fall.

As the sanctions were lifted off Iran, the country's authorities used the Davos platform to remind the forum members of the possibilities and capacities of the Iranian economy.

© Fotolia / Borna_Mir
Friend in Deed: Iran Ready for Across-the-Board Cooperation With Russia
Iran's economy is expected to grow after the lifting of Western sanctions at an annual rate of least 5 percent, Mohammad Nahavandian said.

"The GDP growth for the Iranian economy just this year, 2016, and coming years will be more than the average for global growth rates. It is predicted, [GDP growth will amount to] at least five percent," Nahavandian said, adding that the government's five-year plan foresees an 8-percent growth.

The Iranian authorities will take steps for the economic development and attracting of investment, he stressed.

He later told Sputnik that Tehran was interested in investing in the Russian economy, particularly in the area of research and development,

"And now that the sanctions are lifted we have many opportunities to expand economic ties with Russia," Nahavandian said.

The Iranian official said that any possible restoration of international sanctions against Iran will not have a negative impact on the investment contracts that will be signed following the lifting of nuclear-related restrictive measures.

This would be another advantage "to international companies to engage in different kinds of business with Iran," he noted.

Nahavandian told Sputnik that his country hoped to join the World Trade Organization (WTO) this year, adding that the request had already been sent.

Iran is currently an observer in the organization.

© AFP 2020 / JUSSI NOUSIAINEN / LEHTIKUVA
Anti-Russia Sanctions, Failed Reforms Trigger Economic Slump in Finland
Anti-Iran sanctions at the Davos forum were primarily spoken of in the past tense, while for Russia the issue remains the matter of the current and future relations with the West.

But the forum sounded new hints to the fact that Western anti-Russia sanctions might be lifted soon.

Finnish Finance Minister Alexander Stubb told Sputnik that Finland’s economic downturn is related to its failure to implement structural reforms in the labor market and, to some extent, to its sanctions on Russia.

In late December 2015, the European Union extended the economic sanctions against Russia for another six months until July 31, 2016.

The chairman of the Munich Security Conference (MSC) said that German companies would like to see the Western sanctions against Russia lifted as soon as possible.

"I see a couple of CEOs of major German companies in this room, they would love, and I have a great sympathy for that, they would love to see the sanctions ended today rather than in a year from now," Wolfgang Ischinger said at The Outlook for Russia WEF session.

In turn, French Foreign Minister Laurent Fabius told Sputnik that Russia and the countries of Europe should and "need" to work together to improve ties.

US Secretary of State John Kerry said that the restrictive measures could be gone in few months should the Minsk agreements be implemented.

"I believe that with effort and with bona fide, legitimate intent to solve the problem on both sides, it is possible in these next months to… get to a place where sanctions can be appropriately… removed," Kerry said during a speech in Davos.

Limited Value for Money: Is Davos Worth Its Super High Price Tag?