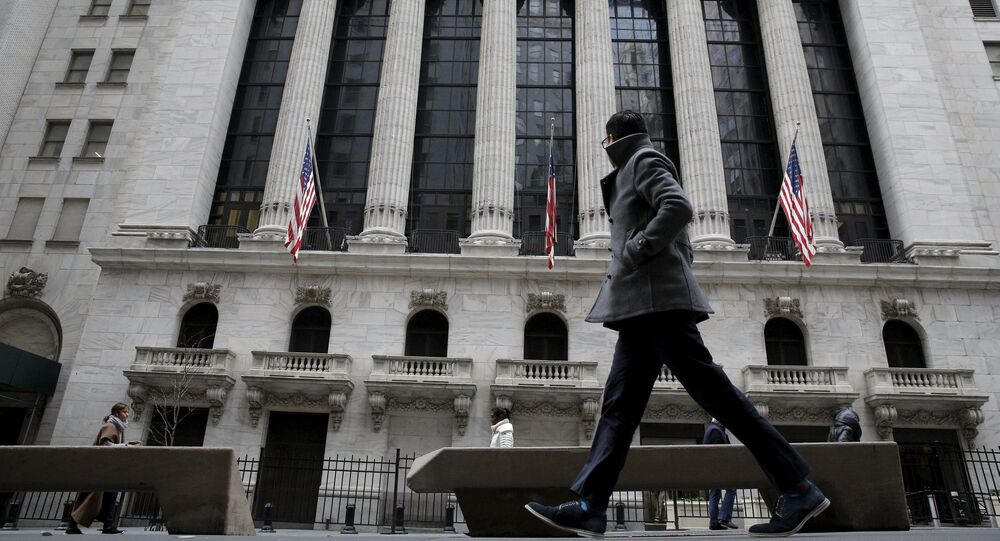 Cheap commodities, high local risks and inconsistent economic policies, along with the US Fed’s attitude toward dollar borrowing rates, resulted in emerging markets losing $735 bln in investment money in 2015, with more to go.

© Flickr / Ars Electronica
Global Financial Crisis Likely Averted……For Now
Kristian Rouz —  Commodity prices have plunged; the decline has accelerated over the last year. Currencies have witnessed devaluations, and stocks and bond routs have prevailed across most emerging markets; capital outflows have hit some $735 bln in 2015; $448 bln in outflows are expected this year. Overall, during 2015-2016, safe-haven assets in advanced nations will attract about $1.2 trln in investment, as estimated by the Washington-based Institute of International Finance. Bucking the trend, US Treasuries are rising in price, causing a decline in yield and intimidating US growth prospects, while one of the least likely safe-haven assets, the Japanese yen, is rising against the dollar, harming the nation's exporters.

Imbalances in international capital flows are being exacerbated amidst the developing nations' gloom as the slump in commodities, economic and political mismanagement and corruption have triggered massive outflows, with investors seeking safer assets in developed markets. An influx of some $735 bln in capital in 2015, with another $448 bln due in 2016, is hardly good news for the advanced economies, as the abundance of international investment is heating up the hottest sectors, like banking and overall finance, barely reaching the real economy.

In 2015, China alone lost some $676 bln of investment capital, according to IIF data. IIF's previous estimates placed the total amount of emerging markets outflows for 2015 at some $348 bln, but the actual number turned out to be about twice that much.

© AP Photo / Andy Wong
Cautious Optimism: China’s Economy Likely to Withstand Challenges of 2016
Despite a post-crisis rebound which lasted several years, which was fueled by the imbursement of debt (China) and sky-high commodity revenues (most of the remaining EM), emerging markets have by now rolled back to the point they were at in 2009: local stocks are cheap and currencies are weak. In 31 developing nations, equity markets lost an aggregate of approximately $2 trln in the first weeks of 2016. Elsewhere the stock rout was smaller in scale, and by now has all but waned. However, equity value dynamics might only suggest the future movements of investment capital; however, there is hardly any doubt of further massive outflows.

"Weakness extends well beyond China, as we have seen persistent portfolio outflows out of a broad range of emerging markets, with investors increasingly worried about growth prospects and high corporate indebtedness," Charles Collyns of the IIF said.

Among the top emerging markets at risk, the IIF named Brazil, South Africa and Turkey, which are all plagued by inconsistent macroeconomic policy, massive foreign currency-denominated corporate debt and negative balance sheets.

However, China and Russia are a slightly different story. Although Chinese growth has slowed to its 1990 level, and high debt levels, along with structural weakness, still persist, Beijing has started limited reforms aimed at economic deregulation, while having repeatedly signaled its readiness to implement deeper change. Russia, on the other hand, has opted to solve its economic issues through a series of massive devaluations of its national currency, the ruble. Having slumped almost threefold, the weaker ruble is now allowing the oil-dependent nation to sustain some fiscal stability.

However, Brazil and Russia are in recession for the second consecutive year, and massive capital outflows have hardly helped growth targets in both nations. The US Federal Reserve's policies during the recent years have played a significant role in the redistribution of global capital flows; however, the main factors affecting emerging market disinvestment are purely domestic.

"The impact of the Fed's shift to a tightening cycle may be limited as long as it is gradual, but flows to EMs will continue to face headwinds [due to] growth and debt concerns," the IIF statement reads.

Another reason investors dumped emerging market assets in 2015 was due to conscious efforts on the part of heavily-indebted China's corporate sector to decrease their exposure to dollar risks. Consequently, the renminbi dropped in value when market players were expecting it to rise further, causing panic and mistrust in emerging markets in general.