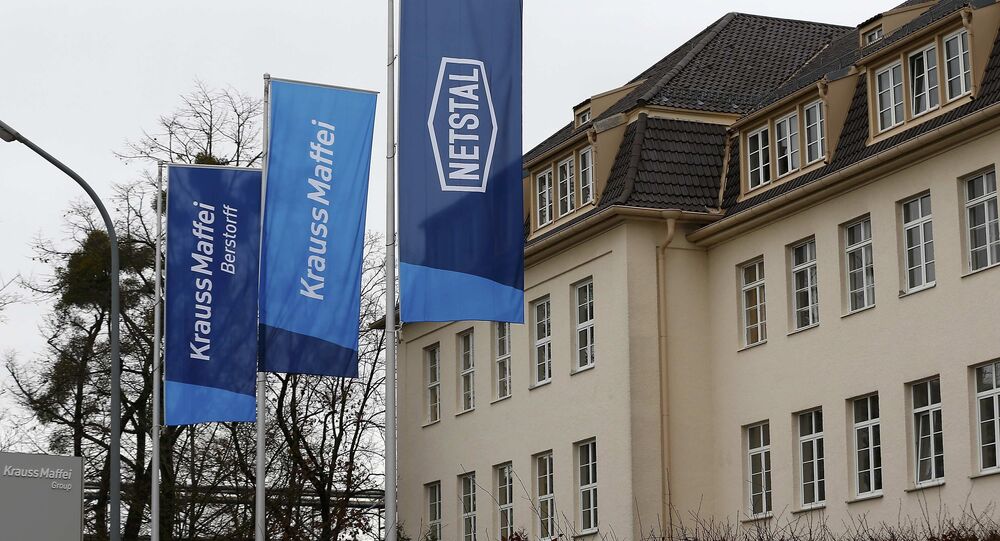 The EU has delayed a decision granting market economy status for China amid the biggest ever investment push by a Chinese company into the German market.

© AFP 2020 / WANG ZHAO
Two Futures: China Buys Chemical Companies as US Bets on Market Bubbles
On Wednesday, Brussels resolved to take at least six months to examine the issue and work out the official requirements for country members. This comes amid a deal struck by China National Chemical Corporation to buy Germany’s KraussMaffei chemical engineering giant, for $1 billion.

The EU has been pondering over giving China market economy status for over 15 years, including during EU-China summits and bilateral meeting between leaders. Meanwhile, the issue was not on the agenda of a European Commission plenary session on January 13.

The decision was announced by Vice President of the European Commission Frans Timmermans during a press-conference following the meeting.

Granting market economy status for China would affect both European economic development and foreign trade relations. The European Commission said it has to thoroughly examine all the aspects on the issue, especially its influence on the European labor market. The official recommendations will be ready by the second half of 2016, Brussels decided.

"We had a discussion on the subject this morning, but will come back to it later because the president [of the European Commission] concluded that this issue has to be looked at from all important angles given the subject’s [importance] for international trade and also for the EU’s economy," Timmermans was quoted as saying by the Financial Times.

The US also seems to be involved in the intrigue between Brussels and Beijing. In December 2015, Washington warned the EU from recognizing China as a market economy. According to the Financial Times, market economy status for China would flood the US and European market with unfairly cheap products from China.

In response, Beijing said it hoped the claims were only false rumors.

© AP Photo / Virginia Mayo
2016 Forecast: Europe May Abandon 'Hollow' Partnership With US for Russia and China
The EU’s unwillingness to take further steps to liberalize trade ties with its second-largest (after the US) trade partner could stem from fears over China buying large amounts of European strategic assets. Meanwhile, China has managed to overcome obstacles mounted by the EU on its way to the European market. In recent years, China has acquired many major brands and companies in the EU.

On January 10, a consortium of Chinese investors approved the acquisition of Germany’s KraussMaffei Group by China National Chemical Corporation (ChemChina) for $1 billion. The deal is expected to be closed in the first half of 2016, and will be the biggest Chinese investment in the German economy.

KraussMaffei Group is one of the world’s leading manufacturers of machines for producing and recycling plastics. Its products are in high demand in a wide range of industries, including car-manufacturing, the production of medical equipment, pharmaceuticals, and many kinds of consumer goods. The deal would allow the company to expand production in the plastics industry as well as give China access to new manufacturing experience and technologies.

ChemChina has already bought several companies in France, Britain and Israel. In 2015, it announced the purchase of Italian tire-manufacturer Pirelli for $7.7 billion. It was the biggest foreign deal by a Chinese company since China’s oil company CNOOC purchased Canada’s Nexen Inc. for $15 billion in 2012.

"Germany like Britain or other European countries is not afraid of Chinese investments. Chinese pay attention to management and human resources as well as the technologies they invest in," Vladislava Belova, head of the Center for German Studies at the Russian Academy of Sciences, told Sputnik China.

Chinese companies have accumulated enough money and experience to expand its activities, she added. This is a new trend for China, which is following the path other countries and transnational corporations have taken.

"Direct investments from China are a trend of internationalization of the Chinese economy and Chinese companies. KraussMaffei is interesting not only as a chemical company but also as a company involved in the German defense industry," the analyst underscored.

Huang Weiping, professor of the People’s University of China, agreed that the recent deal is part of China’s strategy to internationalize its economy.

"At the same time, this is not an isolated move. ChemChina has already bought companies in France, Britain, Italy, and Israel. In addition, it is an important part of the company’s internationalization strategy. In economic terms, the company would obtain technologies as well as KraussMaffei’s market share and may use it," Weiping told Sputnik.