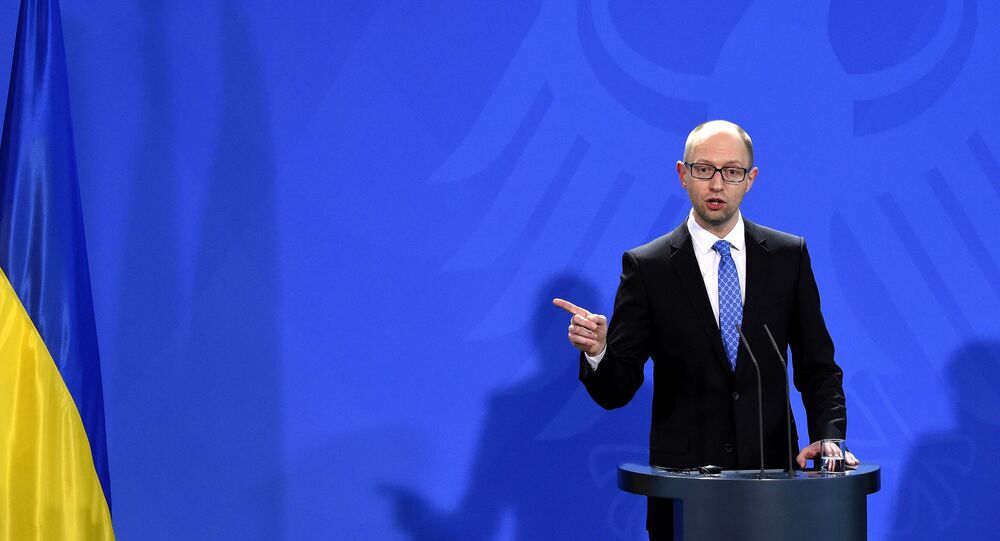 On Thursday, Ukraine's parliament gave Prime Minister Arseniy Yatsenyuk the go-ahead to introduce sanctions against Russia, in response to Moscow's suspension of a free trade zone between the two countries. What's behind the latest Ukrainian-Russian spat, and what impact will Kiev's sanctions have on Russia's economy, and Ukraine's own?

Ukraine's parliament, the Rada, has given the government free rein to introduce a series of "responsive measures" in trade against Russia, in response to Russia's decision to introduce a food embargo against Ukraine, and to suspend its Commonwealth of Independent States (CIS) Free Trade Area agreement with Kiev beginning January 1.

For its part, Moscow made the decision to ban the import of Ukrainian food products after Kiev joined with Washington and Brussels in introducing economic sanctions against Russia.

© AP Photo / Efrem Lukatsky
Ukrainian Cabinet Plans to Impose 'Responsive Measures' Against Russia
More importantly, Russia's decision to suspend the CIS free trade area agreement with Ukraine was the result of the impending entry into force of the economic portion of Kiev's Association Agreement with Brussels, signed in October 2014. The agreement aims to promote Ukraine's economic integration into the bloc, including the creation of a free trade zone.

Over the past year, Moscow had repeatedly warned that if Ukraine retained their preferential trade rights within the CIS free trade area, while simultaneously opening their markets to European goods, the Russian market would be flooded by the uncontrolled flow of EU goods via Ukraine, something which would be devastating for Russian producers. Accordingly, on December 16, President Putin signed a decree to suspend Russia's trade preferences with Ukraine, effective January 1.

Explaining the Russian government's decision, the Foreign Ministry released a statement earlier this week saying that while Moscow cannot interfere in Kiev's 'sovereign choice', even if Ukrainian officials have decided to undermine their own economy, Russia cannot allow the choice to harm its own interests. "It's unclear why Russia has to pay for that choice. We have our own economic interests that we have no plans to sacrifice, especially to satisfy foreign ambitions," the statement noted.

Ukraine's response, approved by the country's parliament on Thursday, requires the restriction or total ban on various forms of economic cooperation, the abolition of preferential tariffs on Russian goods, and the imposition of duties on all trade operations.

© Sputnik / Alexander Astafyev
EEU to Develop Response to EU-Ukraine Free Trade Area Deal by Mid-2016
"The logical question that arises," the independent Russian newspaper Svobodnaya Pressa suggests, "is whether and to what extent these sanctions will have an impact on us, especially considering that our trade with post-Maidan Ukraine has already declined nearly threefold."

Speaking to the newspaper, Tamara Guzenkova, deputy director of the Russian Institute for Strategic Studies, said that to date, the decline in trade has had as much or even more to do with the collapse of the Ukrainian economy as it has with the worsening relations between Moscow and Kiev.

"Indeed, over the past two years, trade turnover between Ukraine and Russia has decreased significantly. If in good years it reached upwards of $40 billion, today it struggles to reach $12-15 billion." But this, the expert suggested, is not really "connected with Ukraine's spiteful refusal to trade with Russia."

Guzenkova pointed out that "with regard to Ukraine, the EU had introduced certain customs privileges even before the ratification of the agreement on free trade (which takes effect next year). Ukraine already has the opportunity to trade on very favorable terms, with substantially reduced duties levied by EU countries. Nevertheless, its trade with the EU has also slipped by over 30% —that is, Ukraine's trade with the West has declined by a third."

This, the expert suggests, is related to the fact that Ukraine does not have the ability "to acquire Western markets. After all, the absence, or at least reduction of customs duties does not cancel out the existence of standards and norms according to which goods may or may not enter into the European Union. Ukraine is unable to cope, even despite the preferences they've already been granted."

"Therefore," Guzenkova says, Ukraine's new sanctions against Russia "are a sign not so much about Kiev's strict position in relation to its traditional (and, it's worth emphasizing – very important trade partner) so much as a demonstration of the collapse of Ukrainian production and trade, which now characterizes the economic life of Ukraine."

© Sputnik / Ramil Sitdikov
Russia Won't Sacrifice Interests so Kiev Benefits From EU Free Trade Zone
Asked by the newspaper how much of an impact the Ukrainian government's new sanctions will have on Russia, Guzenkova said that the answer is: not much.

"Ukraine with its sanctions is, as it were, last in line. We have been living under sanctions for almost two years. And we have had sanctions imposed on us by countries with whom we have substantial trade and economic relations – first and foremost – with Germany."

"Ukraine," the analyst noted, "is not Russia's main trade and economic partner. To think otherwise would be to telling a tall tale. Our main trade partner is the EU, by whom we have been sanctioned for almost two years. But the Russian economy continues to exist under these circumstances."

"Of course, there will be certain pressures, and losses, because sanctions are both political and economic in their character. But these 'symmetrical measures' on Ukraine's part will not be catastrophic for Russia. The economic and business cooperation between our two countries is gradually coming to naught. This has been a process with a prolonged character. Now, perhaps, the last ties which bind our countries economically will be torn."

More than anything, Guzenkova laments, Kiev's sanctions will harm Ukraine's own economy. "Ukraine will find itself like a jar with the lid closed, because they will be unlikely to advance their products to the West in any significant volume, for a variety of reasons. And to the East they themselves are putting up a fence, and Russia is forced to respond."

© Sputnik / Sergey Guneev
'Game Over': Putin Accuses EU of Sabotaging Talks on Free Trade With Ukraine
Therefore, "for the Ukrainian economy, 2016 will be a very difficult year. As for Russia, I think we have learned to adapt." For example, "even without Ukraine, our aviation industry has existed for several years. Military-technical cooperation has practically stopped. With the collapse of its industrial production, Kiev vacillates between buying and not buying Russian gas, and in any event, consumes much less."

With the situation in Ukraine only set to worsen, Guzenkova believes that a number of Ukrainian regions will be forced "to attempt to expand the 'grey zone' of cross-border trade, because people need to survive somehow – to have at least some money to heat their apartments, to have light, and some essentials. Therefore, I believe that a series of trade relations will be converted into a 'grey flow' of goods smuggling, which will increase in the border regions."