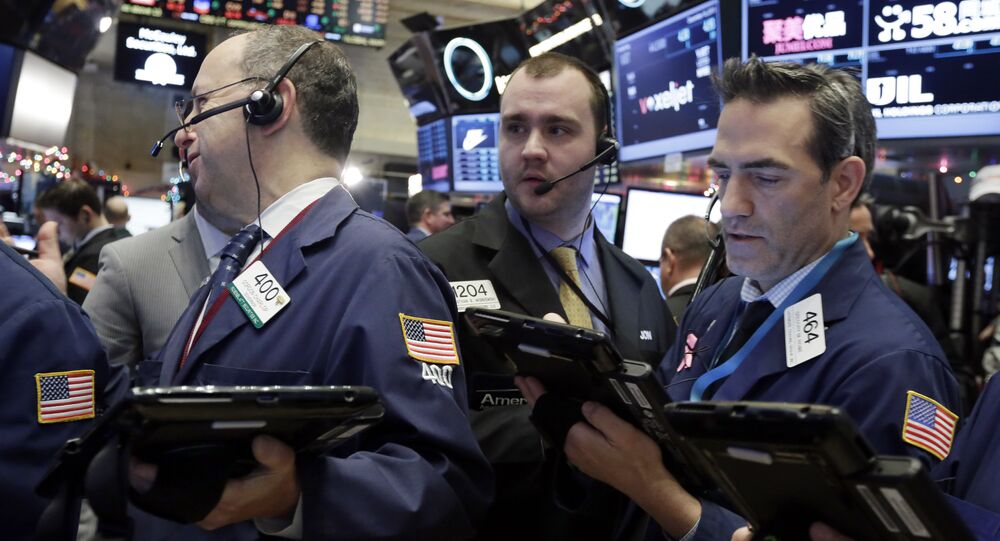 Back to 2008: US Energy Bankruptcies Hit Crisis Level in Q4

The amount of involuntary bankruptcies in the US energy sector has reached its Great Recession level in the fourth quarter as larger oil companies aspire to erase the remaining effects the shale revolution has had on the business landscape in the recent years.

Kristian Rouz — The financial struggle in the US energy sector has been exacerbated dramatically in the fourth quarter, as a yet another drop in crude prices, combined with the junk bond meltdown in December, have triggered a massive wave of oil and natural gas bankruptcies across the nation, with more liquidations of energy assets to follow in the coming year. The scale of energy bankruptcies has reached its 2008-2009 levels in Q4, according to the Texas monetary authorities, erasing multiple jobs in an industry which was booming not too long ago.

© AP Photo / SPA, File
Battleground Syria: Saudi Arabia and Turkey Seeking to 'Spark New Oil War'
The plight of the US domestic oil sector resembles the 2008 financial crisis: many companies are deprived of their regular sources of money liquidity as they are no longer capable of producing oil profitably. Amidst widespread disinvestment, the low crude prices and the junk bond collapse, many oil small caps hit rock bottom in Q4. Involuntarily bankruptcies have affected at least 9 US energy companies as their creditors lost any hope of obtaining a return on their investment: the entire industry is becoming increasingly unprofitable.

The Federal Reserve Bank of Dallas reported that the total amount of debt of the now-bankrupt oil companies has exceeded $2 bln. The liquidation of the 9 energy companies would take a severe toll on the US labor market, with some 70,000 jobs lost in Q4 alone. The industry is poised to shrink unless oil prices rise, which might actually happen as a direct consequence of the eroding competition in the US energy sector.

"Lower oil prices have taken a significant financial toll on US oil and gas producers, in part because many face higher costs of production than their international counterparts," the Dallas Fed research team wrote in a note. "If bankruptcies continue at this rate, more may follow in 2016."

© AP Photo / Jae C. Hong
Why US is Unable to 'Oust Russia From European Energy Market'
Among the bankrupt companies are Miller Energy Resources Inc, Black Elk Energy Offshore Operations and Energy & Exploration Partners Inc., which have about $2 bln of outstanding debt they were unable to properly service due to a decline in commercial revenues. There are 7 additional now-bankrupt energy small caps, which owe about $200 mln total.

Black Elk was hit the worst: adding to the financial insolvency, the company attracted the attention of federal authorities that opened a criminal investigation into the 2012 explosion at their drilling platform in the Mexican Gulf, which left 3 people dead and caused an oil spill.

The slump in oil prices down to $37/bbl from approximately $114/bbl over the course of the past 18 months has reflected negatively on most US energy companies, forcing them to cut costs and save money. Laying off workers and idling oil derricks have become a common practice among the drillers, but the worst thing they did was to over-borrow, counting on higher returns amidst high oil prices; the latter wouldn't remain.

"Some producers are getting very, very far out there with what they owe their suppliers," John Sparacino of the Houston, TX branch of the law firm Vorys, Sater, Seymour and Pease said.

The low oil prices might persist well into the coming year, the Dallas Fed said. According to the regulator's estimates, the international oil supply might outpace demand by 600,000 bpd, with oil inventories accumulating till late 2017, at which point the global economic acceleration would provide for demand to outpace the supply again.

According to Goldman Sachs' calculations, after Iran resumes its full-scale oil shipments, an additional 640,000 bpd would find its into the global market in 2016.

© CC BY 2.0 / Justin Vidamo / The Burning of the Sky
A Line in the Sand: OPEC Divided Amid Threat of Low Oil Prices in 2016
Still, US oil production turned out to be unexpectedly tenacious, not least thanks to shale technology which allows oil rigs to be idled and recommissioned in a matter of days.  According to the US Energy Information Administration, the storage facilities are now almost full with oil extracted in May-June of this outgoing year, when oil cost about $60/bbl. Nevertheless, most recently, the Gulf of Mexico projects have boosted the US oil output by 500,000 bpd, making the situation worse for on-shore shale drillers.

"Given the great uncertainty surrounding projections and the timing of supply and demand changes, the coming year promises to be a dynamic one for the oil markets," the Dallas Fed noted.

The involuntary bankruptcy cases filed against the aforementioned energy small caps were in some cases initiated by larger energy companies. For instance, international oil giants Baker Hughes and Schlumberger filed a bankruptcy lawsuit against Miller and Energy & Exploration Partners. The small cap was liquidated shortly afterward.

"If oil continues below $40 a barrel, we should expect to see even more energy filings, both voluntary and involuntary," John Penn of the Dallas-based Perkins Coie said.

There is currently immense monopolization momentum gathering on in the US energy sector, suggesting that crude prices will go up in 2016.