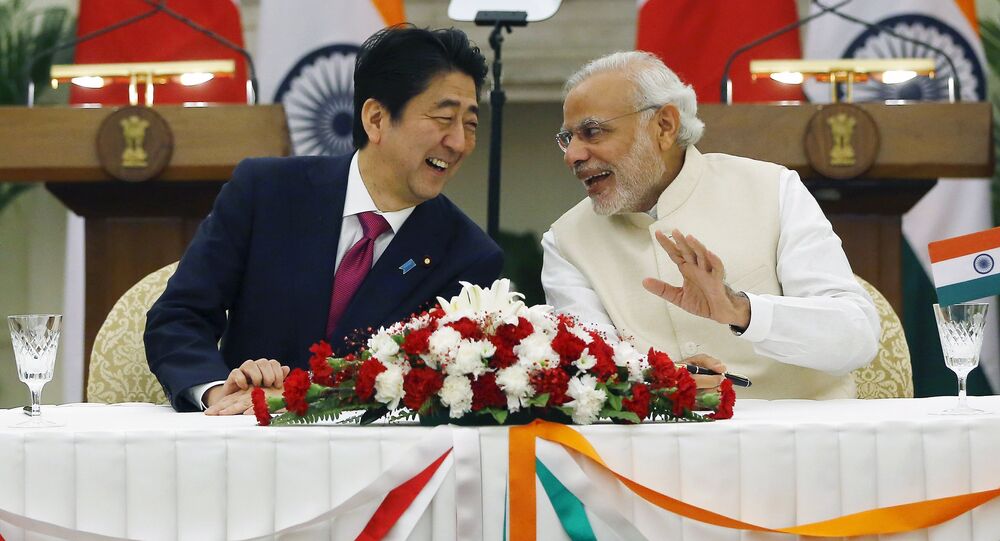 Tokyo and New Delhi signed agreements on peaceful use of nuclear power and on the construction of a 500-kilometer railway linking the western Indian cities of Mumbai and Ahmedabad.

"A memorandum of understanding (MoU) was signed. It is a symbol of a new level of mutual trust and strategic partnership," Modi stated at a press briefing in the follow-up to the meeting with his Japanese counterpart Shinzo Abe.

© AP Photo / Shizuo Kambayashi
Japan Ready to Upgrade Indian Railways, Facilitate Business Ties
Until recently, there have been serious doubts that Japan will seal a civil nuclear agreement with India due to the fact New Delhi has not signed the Nuclear Nonproliferation Treaty.

India and Japan also reached an agreement on the construction of a 500-kilometer (310.68 miles) railway linking the western Indian cities of Mumbai and Ahmedabad, Modi added.

"No less historic is our decision to introduce High Speed Rail on the Mumbai-Ahmedabad sector through Japan’s Shinkansen, known for its speed, reliability and safety. We greatly appreciate Prime Minister Abe's extraordinary package of approximately $12 billion and technical assistance, on very easy terms, for this project."

The construction is due to start in 2017, with the goal of launching railway operations in 2023.