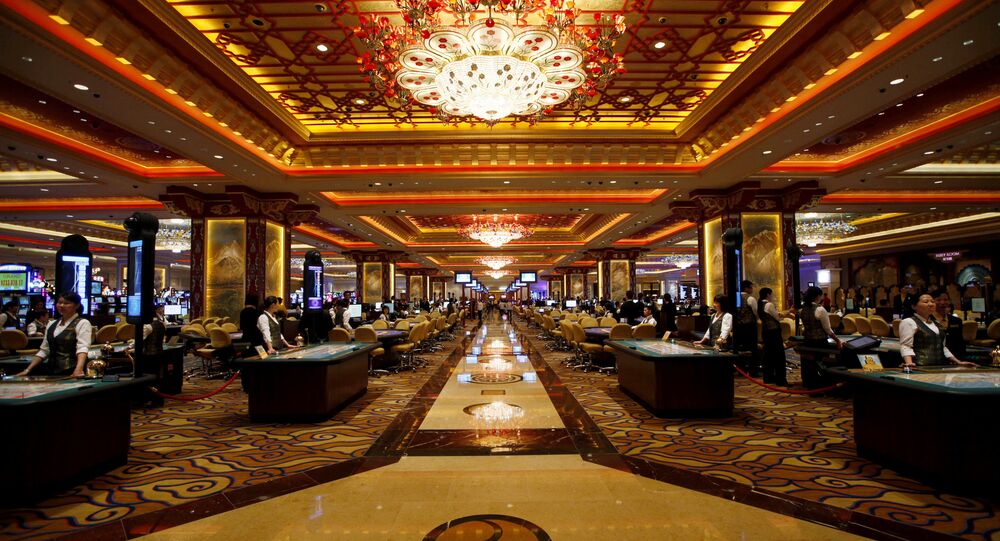 The casino-based economy of the autonomous Chinese city of Macau is in a severe recession due to the mainland’s economic slowdown, financial turmoil and crackdown on corruption, as well as attempts to impose excessive regulations on the gambling industry.

Kristian Rouz — The former Portuguese colony of Macau, currently an autonomous city in China, is suffering from a severe economic recession. Its GDP has been falling for five consecutive quarters, accelerating dramatically in the third quarter to a massive 24% crash. The gambling-based economy of Macau is facing an across-the-board crackdown on  casinos, the direct consequence of a Beijing-initiated anti-corruption campaign, scaring off most of the gambling industry's clientele. The ongoing economic slowdown in the mainland, and this past summer's stock meltdown in Shenzhen and Shanghai also contributed to the decline in cash inflows to Macau's casino-based economy.

Casinos constitute about two-thirds of Macau's economy, and the recent events in mainland China are gravely impairing the Bay Gate's once-thriving entertainment industry. Macau's GDP fell 24.2% in Q3, a slight improvement from the 26.4% decline the previous quarter, according to data provided by Macau Statistics and Census Service.

China Daily
Another Bubble? China’s Corporate Bonds Market Surges on Shadow Investment
Fortunes within the casino industry are even worse: Macau's gross gaming revenue slumped 35% in Q3 after a 38% crash the previous quarter. Just a couple of years ago, the entire situation was different: in Q1 2014, gross gaming revenue expanded 20%, and in Q4 2013 the measure rose by 25%, driving the expansion in the Bay Gate's economy to 15% and 13%, respectively.

Macau's casinos used to be the primary attraction for hardcore gamblers from the mainland, but the demise in financial speculation, the curb on corruption, and the overall economic turbulence in mainland China have all taken their toll on the number of wealthy gamblers arriving in Macau. Bay Gate's gambling industry has so far reported 17 consecutive months of contraction, and Fernando Chui, the city's chief executive, has said the decline would protract into next year.

Macau is attempting to reinvent its gambling industry by making it a tourist-friendly Disneyland-type of international attraction. However, such a strategy requires significant investment and the intervention of international entertainment corporations like MGM, which Beijing would likely oppose.

"The gambling market will gradually find its way to get used to negative factors such as China's economic slowdown and anti-corruption campaign," Zhonglu Zeng of the Macao Polytechnic Institute said.

Meanwhile, the mainland authorities have explicitly expressed their interest in remodeling Macau's economy so that it would not be overtly reliant on gambling. Since mid-2014, Beijing has imposed travel restrictions, installed CCTV cameras in Macau's casinos, monitored banking transactions and imposed limitations on the number of tables in new casinos. These measures have scared off both the casino players and investors.

"In my 45 years of experience, I've never seen anything like this before," said Steve Wynn of Wynn Entertainment. "It's become a major issue in Macau, the impact of government policy in planning. None of us are really clear as to what our environment will be going forward. It makes planning and adjusting almost a mystical process."

© Flickr / Clint Bradford
UN Expert Claims TTIP Trade Deal Is Illegal 'Global Casino'
Macau's casino industry is declining rapidly. During the first ten months this year, casino turnout dropped 35.5%. Wall Street's previous estimates for Macau casinos' performance turned out to be overtly optimistic, and particularly so after Fernando Chui said he expects 2016 casino revenue to reach $25 bln. This is 17% below the Wall Street expectations, and 13% below the Wells Fargo estimates.

Fernando Chui is promising the diversification of Macau's economy. "We try to be conservative and maintain stability," he said. As part of this diversification project, last week Macau signed a trade pact with the mainland.

Under the provisions of the Closer Economic Partnership Arrangement (CEPA), signed between Macau and Beijing on Saturday, the Bay Gate's businesses gain full access to 153 sectors of the mainland economy starting June 1, 2016. The current contraction of Macau's economy was due to the decline in exports of services, including gambling and tourism, meaning the CPA provisions might help the Bay Gate regain some of its revenues.