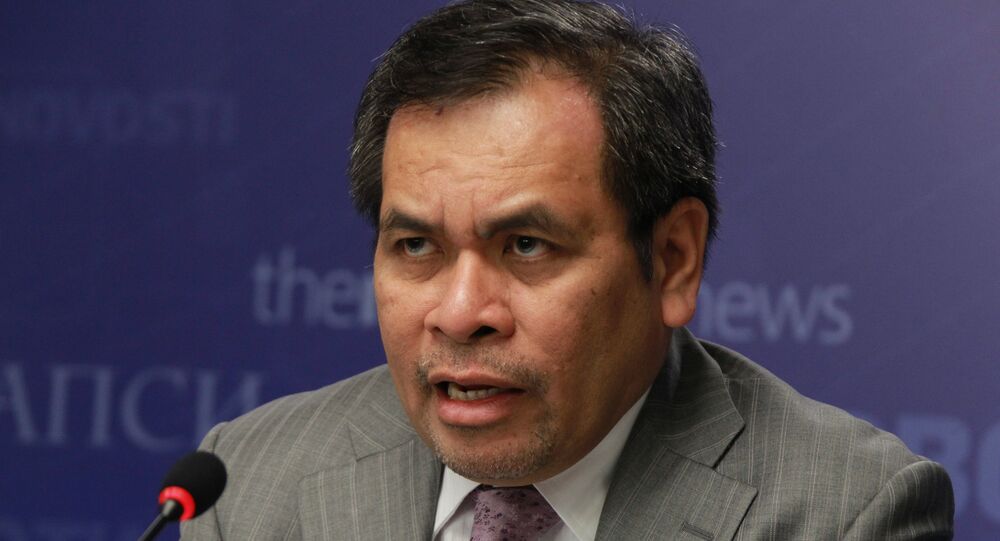 Russia and Indonesia plan to achieve $5 billion in trade between the countries by the end of this year and repeat that goal in 2016, Indonesia’s ambassador to Russia said Wednesday.

MOSCOW (Sputnik) – A Russian and Indonesian Intergovernmental Commission set a goal in April to realize $5 billion in trade between the countries by the end of 2015. Russia's trade representative to Indonesia Sergei Rossomakhov last week indicated a figure of $10 billion by 2018.

“We need to actively move in this direction, especially given the commitments our governments have made, namely the achievement of $5 billion in mutual trade turnover. There are plans to achieve this level by the end of 2015 and 2016,” Ambassador Djauhari Oratmangun told RIA Novosti in an interview.

© AFP 2021 / SANTO / MEDIA INDONESIA
Russia Hopes to Increase Nuclear Energy Projects in Indonesia - Minister
The envoy suggested that improved political relations will positively affect commerce, noting a lack of “aggressive attitude and a readiness to seize new opportunities” among companies in both nations.

Oratmangun suggested that both Russian and Indonesian business communities could take advantage of the sanctions imposed on Russia by the United States, the European Union and their allies over the past two years.

“They need to be more proactive to take advantage of those benefits that currently exist,” the diplomat stressed. “This task is feasible if there is the will and desire on both sides.”

Oratmangun said “even new possibilities for interaction” are available despite challenging circumstances, citing $3.67 billion in commerce last year and $2 billion by mid-2015.

A Russian business delegation is scheduled to visit Indonesia later this month or early December. Possible aerospace technology, shipbuilding, and mining projects are likely to be presented during the visit.

Indonesia is not yet considering membership in the hotly-debated Trans-Pacific Partnership (TPP) trade pact led by the United States, Indonesia’s ambassador to Russia said.

"At least so far, Indonesia is not evaluating the possibility [of joining TPP], but is only studying the creation of the TPP," Djauhari Oratmangun told RIA Novosti.

Oratmangun said Indonesian Foreign Minister Retno Marsudi has announced that she was waiting to view a finalized text of the deal to study the pros and cons of Jakarta’s membership in the controversial trade pact.

The 12 Pacific Rim nations reached an agreement on the pact’s wording early last month. The TPP is expected to be heavily promoted but it remains unclear whether US President Barack Obama can see it ratified before the end of his term in early 2017.

© AFP 2021 / SAUL LOEB
Indonesia Expects Trade, Investments Boost From Possible TPP Membership
"If there is no paperwork and the terms are unclear, how can we seriously consider the possibility of joining," the envoy observed, adding that Indonesia’s priority is to launch the Association of Southeast Asian Nations (ASEAN) Economic Community later this year.

Ambassador Oramangun confirmed that the TPP, whose ongoing negotiations have been shrouded in secrecy, has not been on the agenda of the Asia-Pacific Economic Cooperation (APEC) summit currently underway in the Philippines.

Mohamad Iqbal Djamil, an Indonesian Ministry of Trade APEC Directorate official, told Sputnik on Monday it could take up to two years for Indonesia to join the TPP, if the deal is ratified.