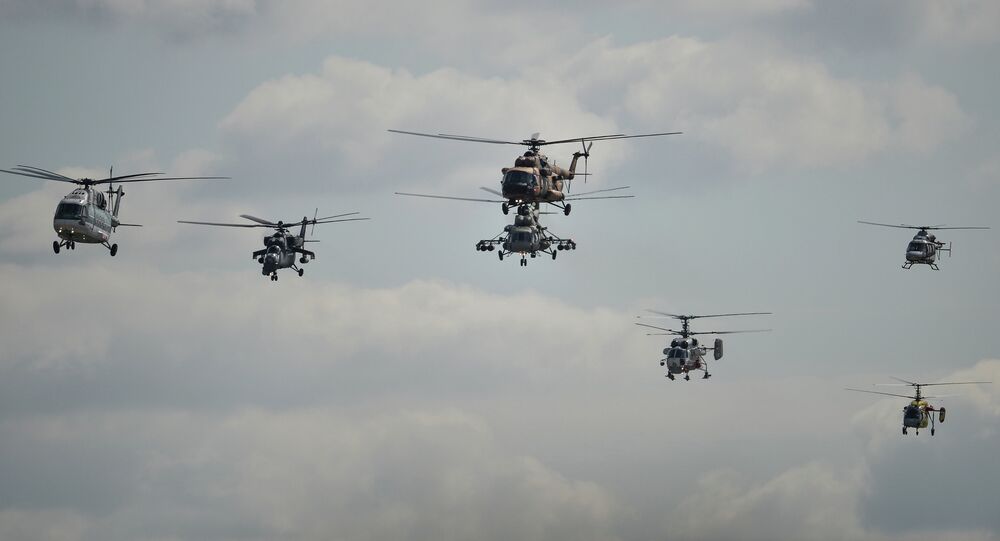 Russian Helicopters, the holding company which owns Russia's iconic helicopter brands, is working to minimize the use of foreign components in its products; moreover, the firm is negotiating deals on the development, sale and maintenance of its products abroad, and is in talks with its Chinese partners on the creation of a new heavy lift chopper.

"We can safely say that in the coming years, the dependence of the Russian helicopter industry on foreign components will be minimized," Mikheev said, noting that upwards of 99% of the components of some products, like the Ka-52 'Alligator' attack helicopter, are already produced in Russia.

The company head noted that the latest military variant of the legendary Mi-8 transport helicopter, the assault transport Mi-8AMTSh-B, is equipped with all-Russian equipment, "including the VK-2500 engines produced by Klimov, and the TA-14 auxiliary power unit, produced by Aerosil."

The new assault helicopter's satellite navigation system is capable of working with both Russia's GLONASS and with GPS, with onboard communications systems "providing the crew with high-quality communications across a wide range of frequencies." Mikheev noted that import substitution is also "going according to schedule" on the Mi-28 anti-armor attack helicopter.

Mikheev emphasized that the successful implementation of the program of import substitution has shown that Russian industry and Russian technical experts "are capable not only of offering competitive products, but also designs that outperform their foreign counterparts." He also revealed that work is already underway on the creation of a new scientific and technical foundation for the years 2025-2030.

© Sputnik / Ilya Bogachev
Russia, UAE Discuss Joint Projects in Helicopter Manufacturing
Despite the company's moves to gain material and technical independence, the director stressed that the import substitution program "should not be viewed as a rejection by Russian companies of cooperation with their foreign counterparts in the development and production of high-tech products."

Mikheev noted that Russian Helicopters "continues to successfully cooperate with companies from China and India, as well as Europe. We do not plan to shut ourselves out and are always ready for a constructive and mutually beneficial cooperation with partners from any country."

Such cooperation is demonstrated by the contract negotiations presently underway between Russian Helicopters and its Chinese counterparts to develop a "fundamentally new," multifunctional heavy lift chopper based on the legendary Mi-26, designed specifically in mind for work in hot and mountainous environments. Mikheev noted that the company and its Chinese counterparts have already distributed the assigned work, with Russian Helicopters responsible for the power unit and the transmission.

In a related note, Mikheev emphasized that Russia's existing fleet of helicopters, including the Mi-171Sh, the Mi-17V-5, the Mi-26T2 and the Mi-35M, have already proven their legendary reliability, and their ability to operate with little need of maintenance in the difficult, hot, sandy environments of the Middle East, the Arabian Peninsula and North Africa over the course of many decades.

© Flickr / José Luis Celada Euba
Russia, India Eager to Start Joint Production of Ka-226T Helicopters
Mikheev also revealed that negotiations are ongoing with India on the production of the Ka-226T utility helicopter, a machine which features an interchangeable mission pod, allowing it to be used to accommodate a variety of equipment and/or personnel.

The helicopter would be built in India, in accordance with the Make in India program of technology transfer endorsed by the Indian government. Mikheev noted that "active negotiations" are underway on the exact parameters of the project and the concrete steps necessary to establish production.

Commenting on the new civil aviation projects presented at the Dubai Airshow, Mikheev noted that the Kazan Ansat, a new, light, multipurpose helicopter, has garnered a great deal of attention at the airshow from potential buyers in the CIS, Southeast Asia, Africa and Latin America.

Developed and produced at the Kazan Helicopters plant, the Ansat can be used as a transport aircraft, a surveillance chopper, a search and rescue vehicle or a medical evacuation chopper. It distinguishes itself from its competitors by offering the largest cabin in its class, and the possibility of quickly manipulating the layout of the cabin.

Commenting on the company's efforts to provide aftermarket support for its foreign buyers, Mikheev announced that Russian Helicopters is actively considering opening a network of training centers abroad to train specialists in maintenance and repair, noting that the company is "interested in providing quality services to train specialists" in its markets abroad.

"The machines must be serviced by competent, trained professionals. Therefore, it can be said that the company has a financial interest in providing all our customers with high-quality training services. The development of a network of training centers abroad is one possible solution to this problem," Mikheev noted.

© Sputnik / Sergey Venyavsky
Bolstering Bilateral Ties: Russia, China Designing New Heavy Copter
The company director recalled that negotiations are already underway for the creation of a training center in India for the Mi-8 transport helicopter and its military variant, for use by both the defense ministry and in civil aviation.

Russian Helicopters, part of the Russian hi-tech state corporation Rostec, is one of the world's leading developers and producers of helicopters, and the sole helicopter company in Russia. The holding was founded in 2007, and includes five major plants, two design bureaus, along with a series of enterprises producing components, aircraft repair plants and a service company providing after-sales support in Russia and abroad.

The Dubai Airshow has been held since 1989, and features exhibitors specializing in both military and civilian aerospace technology. This year the event is being held between November 8-12. Russia has sent 23 companies to the event.