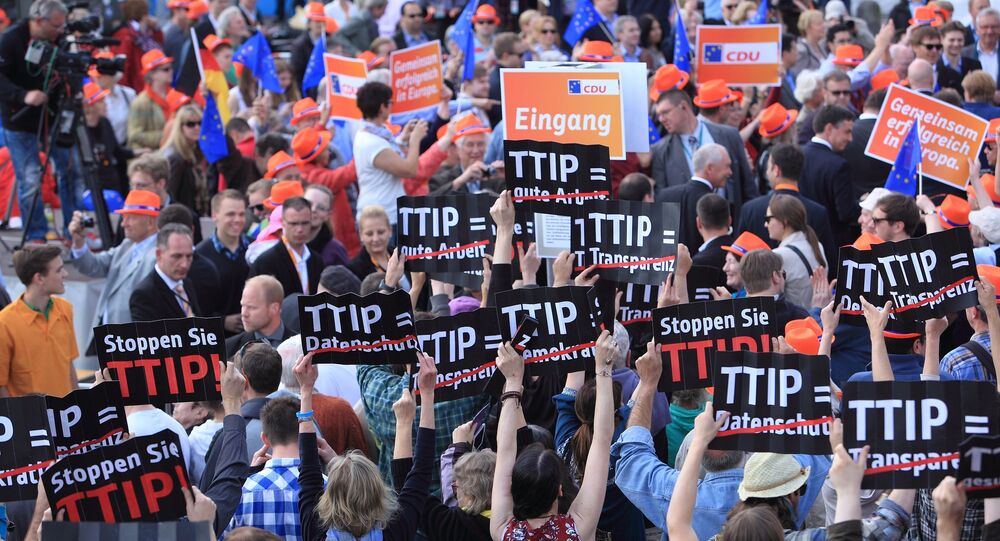 Merkel on TTIP Deal: 'We Do Not Have to Run After US and Beg'

The proposed EU-US Transatlantic Trade Investment Partnership (TTIP) trade deal contains legislation that is fundamentally right, because it is based on high EU standards, and Europe should play a proactive role in the talks, the German chancellor claimed on Tuesday.

BERLIN (Sputnik) — It is not simply a trade pact, but an agreement based on high EU norms, Merkel added.

"I am deeply convinced that this agreement is correct, but…we do not have to run after the United States and beg, we should be more active in these negotiations, and we are doing this," Angela Merkel said, as broadcast by Germany’s NTV channel.

© AP Photo / Matthias Schrader
Bundestag President Demands Greater Transparency in TTIP Negotiations
The controversial TTIP has come in for tough criticism for the unusual secrecy of its negotiations and the inability by any but the negotiators to see the text of the document.

The agreement seeks, according to TTIP-approved statements, the establishment of a transatlantic free-trade economic zone which would deregulate a consumer market containing an estimated 820 million people.

Critics of the deal point out that it threatens the principles of democracy, national sovereignty, the environment, as well as consumer and labor standards.