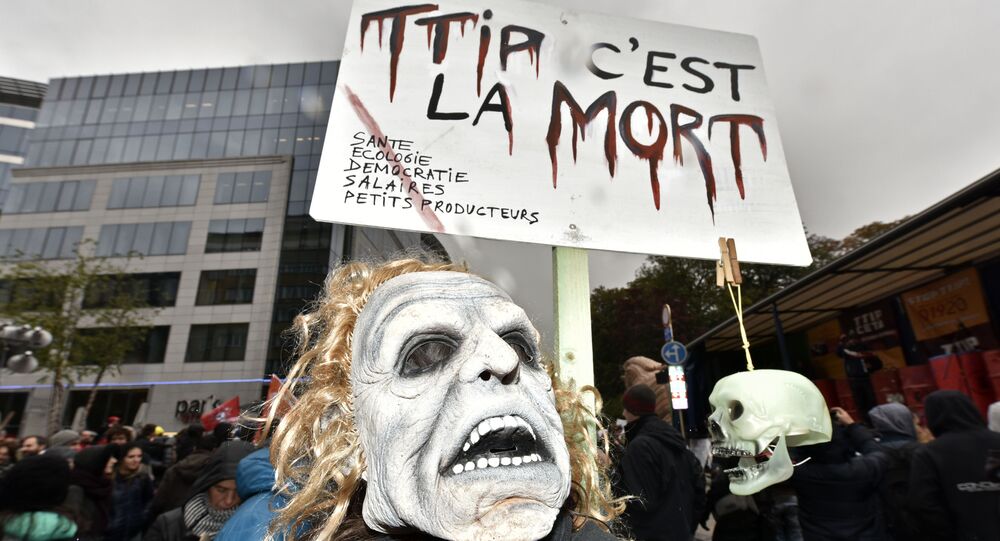 A UK Independence Party (UKIP) lawmaker said on Monday that he had been sworn to secrecy, with a threat of a financial penalty, not to disclose the details of a proposed controversial US-EU free trade pact.

© AP Photo / Martin Meissner
Leaked Documents Show TTIP Negotiations in Deadlock on Most Issues
MOSCOW (Sputnik) – The Transatlantic Trade and Investment Partnership (TTIP) has come in for tough criticism from opponents for the veil of secrecy that has shrouded the ongoing negotiations.

The aim of TTIP is to deregulate trade between European Union and the United States. Critics argue that the deal, which would encompass 60 percent of global production, will weaken environmental, health, safety and labor standards and regulations.

"If I publicly disclose what I have read, I will be subject to a minimum fine [of $3,500]," Stuart Agnew said in a statement, referring to an October 12 viewing of the trade pact’s chapter on agriculture.

"This is the EU's definition of transparency," Agnew added. "The Agricultural chapter is one small part of a very ambitious trade negotiation where the British have to sit on their hands whilst an unelected foreign commissioner takes our decision for us."

The 11th round of negotiations to iron out the final version of the TTIP text are scheduled to open in the southeastern US city of Miami, Florida, on Monday. They are followed by stakeholder forums and conferences later in the week.

© AFP 2021 / JOHN MACDOUGALL
Europe Afraid TTIP Deal to Result in US-Style Capitalism
Negotiated in unusual secrecy for the past two years, TTIP has been accused of assigning undue power to multinational corporations and other copyright holders, with a specific clause permitting them to sue governments through an independent arbitration panel.

Other concerns over TTIP include the removal of local control over trade legislation and copyright from sovereign nations.

UKIP spokeswoman for small business Margot Parker told Sputnik earlier that the party had many concerns about the potential for TTIP to lead to the privatization of the UK’s national healthcare system.

A draft, leaked in February, of the European Union’s "initial offer" in the TTIP negotiations authorized US health corporations to sue governments if lawmakers sought to renationalize currently for-profit services in Britain's National Health Service.

Brussels Considers Public Concerns Over TTIP During Talks With US