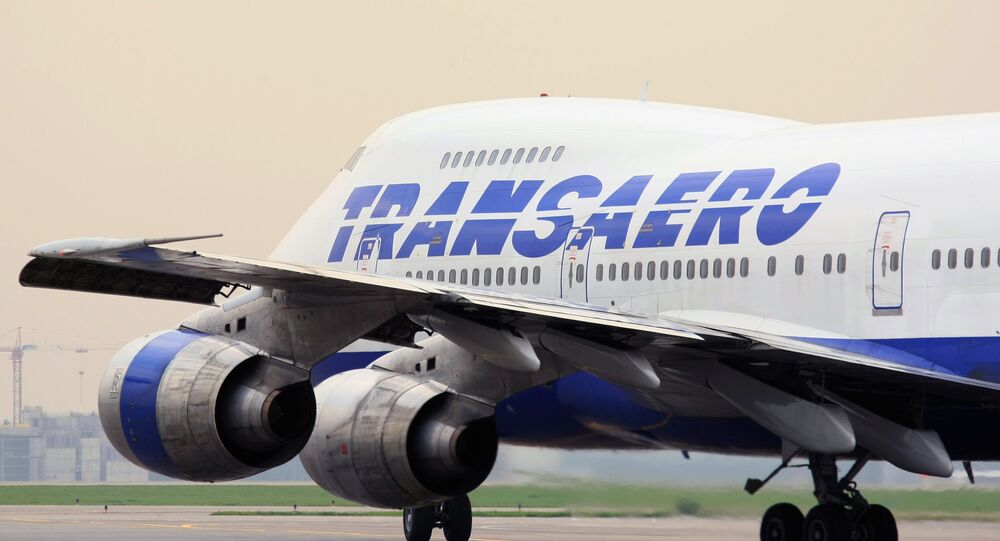 Russian media have reported earlier that bunkruptcy proceeding for Transaero has been started.

The decision to begin bankruptcy proceeding for Transaero airlines was approved during a meeting with Russian Prime Minister Dmitry Medvedev on October 1, Russian media report.

© Sputnik / Maksim Blinov
Aeroflot Cancels All Tickets and Flights to Ukraine Dated After October 25
All participants in the negotiations on the fate of Transaero are reported to have acknowledged bankruptcy as the best available option for the company so far.

Earlier, in a statement to RIA Novosti, Russian Transport Minister Maxim Sokolov said Transaero will stop selling flight tickets from October 1, although the company itself will continue its work.

“All options are currently being reviewed,” Russian Transport Minister Maxim Sokolov said in regard to a question by journalists of the possibility of the airline going bankrupt.

Aeroflot took a tough stance during negotiations, refusing to consolidate Transaero. Its representatives said that banks should have better calculated risks while signing lending contracts with an extremely risky strategy.

In early September Aeroflot announced its intention to acquire a 75 percent stake in Transaero, which has approximately $4 billion debt. The talks on a takeover of the airline by Aeroflot have been so far deadlocked.

Vitaly Vantsev, a Transaero shareholder, said on Monday that there were two options for the airline company. The first one would be handing 75 percent of the company’s shares to Russia’s flagship airline Aeroflot and then restructuring. The second option, according to Vantsev, would be bankruptcy, which “is the worst option for all of the participants in the process.”

So far, bankruptcy is reported to be the only possible option as shareholders of the air carrier have not been able to consolidate the necessary amount of shares (75% + 1 share), while creditors have opposed a model of debt restructuring proposed by Sberbank.

Moreover, the Russian Ministry of Finance refused to provide Transaero with state guarantees in the amount of 85 billion rubles for debt restructuring, which were promised at the early stages of negotiations.