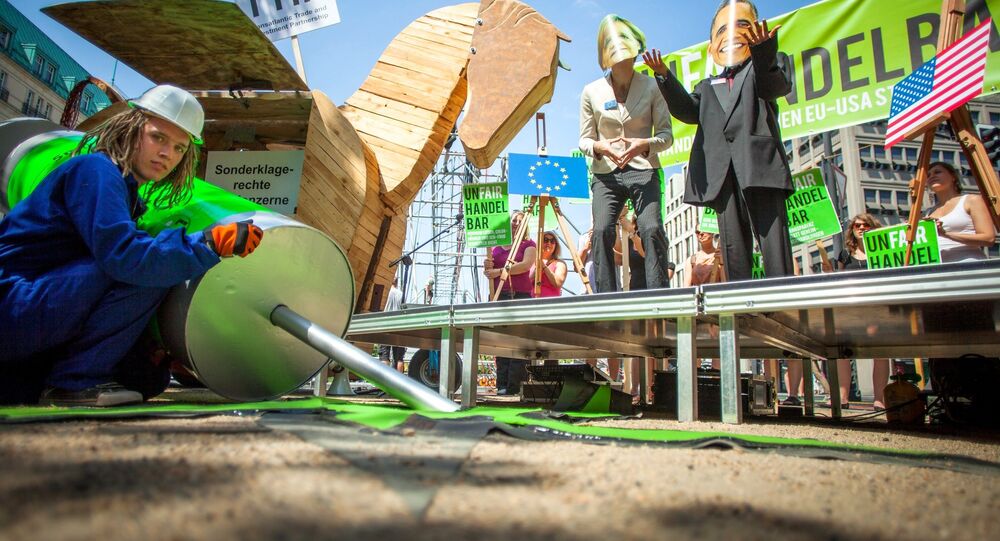 Members of the World Trade Organization (WTO) and the BRICS developing economies should expand negotiations on creating regional trade groups like TTIP and TPP, the European Commission’s former director general for the environment told Sputnik on Thursday.

"The best way for all is to bring this back to the WTO and we are ready to multilateralize these talks. We should pursue it intensively together with BRICS countries," Karl Falkenberg said.

Falkenberg, who was replaced by Daniel Calleja on September 1, argues that the talks to ratify TTIP and TPP are fraught with discriminating practices.

"For the moment there is a risk that with TTIP and TPP we are re-shifting into bilateral approaches, and they by definition are discriminative against those who are not inside – BRICS countries and many others," Falkenberg, a panelist at the WTO Public Forum, told Sputnik.

Both agreements have been criticized for being negotiated in secrecy and accused of unfairly benefiting multinational corporations.

TTIP seeks to streamline and deregulate trade between the United States and the European Union. According to those who have seen the closely guarded text, the trade pact includes stipulations that would enable multinational corporations to sidestep and even prevent sovereign governments from implementing national and international law.

Talks on the TPP trade deal restarted on Wednesday. Negotiations have been held in extremely strict secrecy for years, prompting criticism from labor unions and human rights watchdogs over its uncertain implications for workers’ rights, employment relations and the environment.

Efforts to liberalize bilateral trade through the TTIP and TPP deals undermine a multilateral approach to trade and contradict the principle of international trade non-discrimination, Falkenberg said.

As the 14-year Doha round on trade rule liberalization among WTO countries has stalled, some major WTO members sought trade liberalization outside the WTO multilateral format.

"I am staunch defender of multilateral approaches. We have a global economy growing, and we need to deal with it together. The very strong deviations into regional treaties from my perspective is more a problem than something that is effectively helping."

Falkenberg, a senior adviser to the European Strategy Center, added that going back to bilateralism in trade talks represents "a fundamental contradiction to Article 1 of GATT [General Agreement on Tariffs and Trade] and whole principles of multilateralism, which says that we do not discriminate against each other."

Falkenberg added that bilateral initiatives including TTIP and TPP impede multilateral negotiations, such as the ongoing Doha round.

"We have lost a common sense of purpose. That is why it begins to be more and more difficult to close negotiations," Falkenberg said.

No Guarantee TPP Talks Will Conclude in Two Weeks