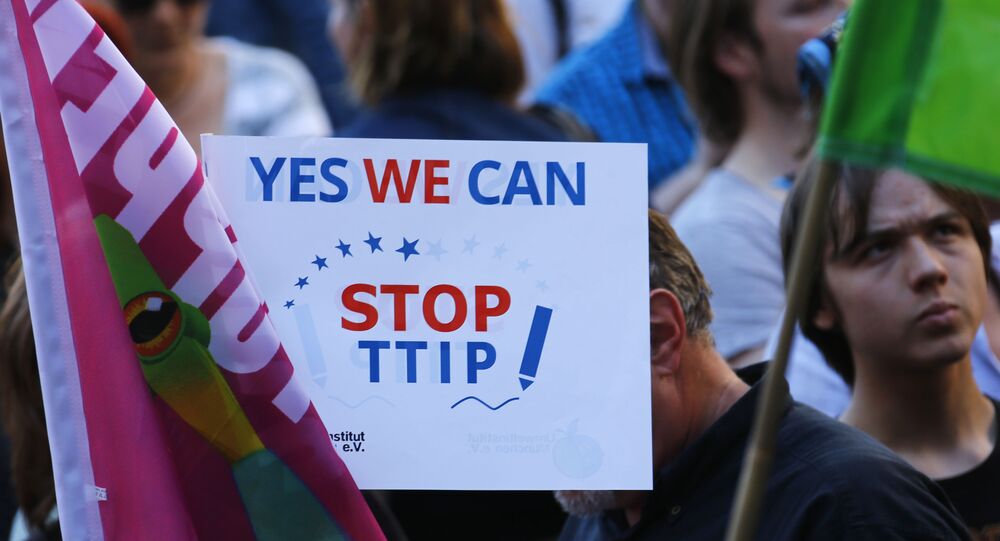 Negotiators for the wide-ranging US-led free-trade agreements in Europe and Asia will soon abandon the exclusive pacts and return to the more inclusive format of the World Trade Organization (WTO), a senior adviser of Sweden’s National Board of Trade told Sputnik on Thursday.

© REUTERS / SCO Photohost
TTIP Negotiators Open for BRICS Participation - EU Lawmaker
GENEVA (Sputnik), Anastasia Levchenko – The United States has been leading the charge to establish free trade blocs with Europe via the Trans-Atlantic Trade and Investment Partnership (TTIP), and the Pacific Rim nations via the Trans-Pacific Partnership (TPP). Both agreements have been criticized for being negotiated under unusual secrecy and accused of unfairly benefiting multinational corporations.

"We have the concern that TTIP could, in the long run, take energy from WTO. In the end, we will need to get back to the WTO, where everyone is member, not just the US," Swedish trade board’s Per Altenberg said.

The TTIP seeks to streamline and deregulate trade between the United States and the European Union and, according to those who have seen the closely guarded text, includes stipulations that would enable multinational corporations to sidestep and even override sovereign governments from implementing national and international law.

Moreover, Per Altenberg thinks that the deal must open its doors to other countries, including BRICS member-states.

"TTIP must be open for other participants, such as Mexico or Turkey who should be able to join TTIP in future, and that relates to other countries too, BRICS countries too," National Board of Trade of Sweden senior adviser, Per Altenberg, said.

© AFP 2021 / FREDERICK FLORIN
TTIP Aims to Shrink Influence of EU's Foreign Policy – French Lawmaker
TTIP is widely criticized for bypassing the multilateral format provided by the World Trade Organization (WTO) and excluding BRICS countries. Its stated goal is to ease the flow of goods and services across the what would become the world’s largest free trade zone, accounting for 60 percent of global production.

The unusually secretive nature of the TTIP negotiations as well as its provisions to establish extraterritorial courts to settle trade disputes and the advantages afforded to multinational corporations have drawn criticism from activists and lawmakers.