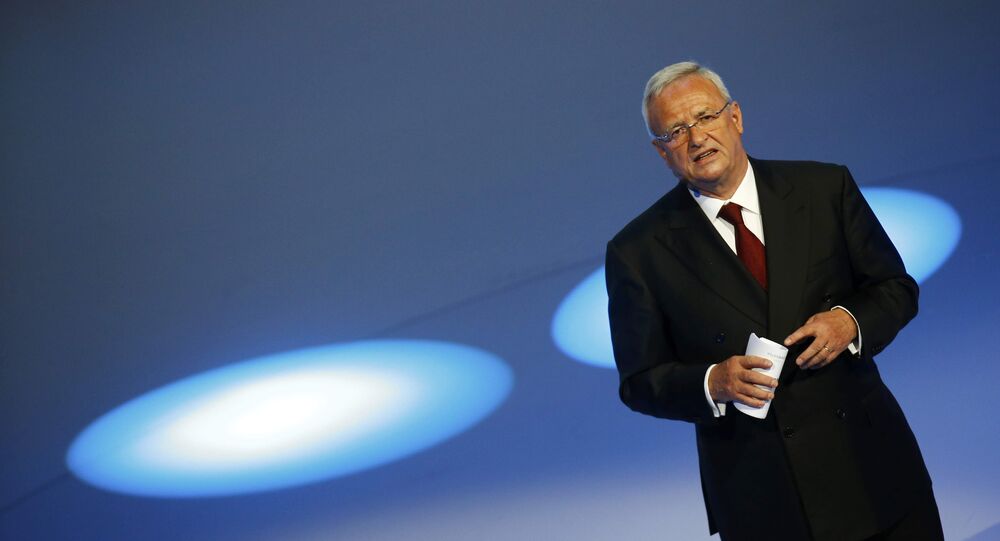 Martin Winterkorn announced on Wednesday his resignation as Volkswagen CEO amid scandal over suspicion of falsifying its vehicle emission tests results.

"The Volkswagen needs a new beginning, which includes new personnel policy. I am clearing the way for this fresh start with my resignation" Winterkorn said.

Meanwhile VW board member Wolfgang Porsche said that Martin Winterkorn did not know anything about emission tests falsification, but still resigned.

© AFP 2020 / TOBIAS SCHWARZ
New York Attorney General Launches Emissions Cheating Probe Into Volkswagen
On September 18, the US Environmental Protection Agency filed a complaint against Volkswagen, alleging the company had built in sophisticated cheat devices that allowed vehicles to pass strict US emissions tests. The Department of Justice recently opened a separate probe into the company.

On Tuesday, Volkswagen chief executive Martin Winterkorn admitted the company had installed emissions cheating devices in as many as 11 million cars sold worldwide.

According to the EPA criterion, Volkswagen could face up to $18 billion in fines.

Winterkorn stated the company will set aside approximately $7.2 billion to deal with the fallout of the emissions cheating scandal. Volkswagen’s stock dropped 20 percent on Monday, on the news of the cheating scandal.

The cheating device allowed Volkswagen’s diesel passenger cars to pass laboratory emissions tests, while emitting up to 40 times the amount of air pollutants allowed under the US Clean Air Act during regular operation.