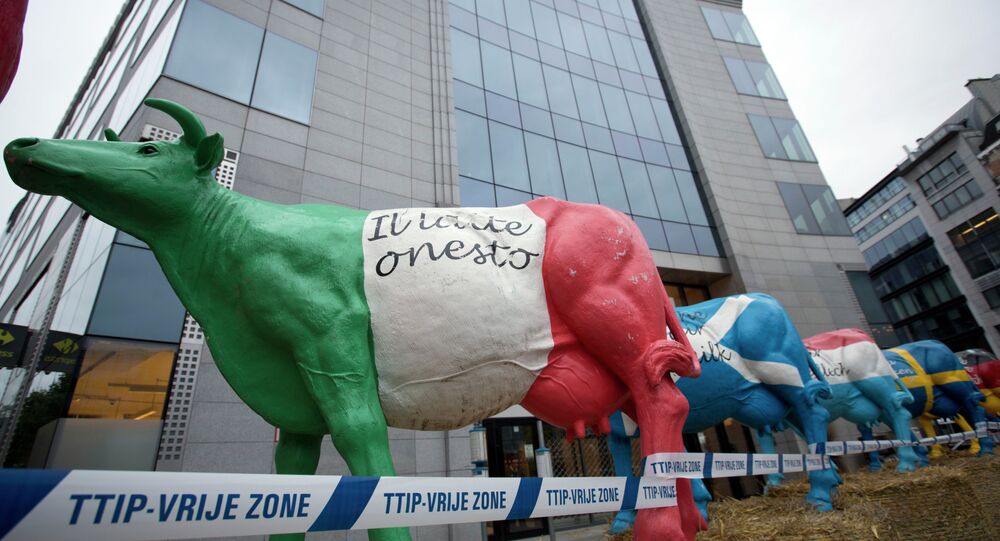 Farmers Cow Brussels Into Shelling Out $550m in State Aid

The European Union’s Common Agriculture policy was once again in disarray after the European Commission pledged $550 million in aid to farmers following protests in Brussels by mainly French, German and Belgian farmers over falling prices.

The latest row involves farmers – particularly in the dairy sector – complaining about the drop in producer food prices, with many on the brink of bankruptcy. There have been demonstrations, in Paris and Brussels, as well as blockades on the borders of France and Germany as well as France and Spain.

© REUTERS / Jacky Naegelen
Farmers and dairy farmers from all over Europe take part in a demonstration outside an European Union farm ministers emergency meeting at the EU Council headquarters in Brussels, Belgium September 7, 2015.

The dairy sector has been hit hard by sanctions between the EU and Russia, which has seen the price of milk plummet, since the Russian ban has taken some €5.5 bn out of the export market annually. This has led to a massive oversupply of milk and a consequent drop in producer prices.

"Today´s Commission proposal is a significant, fast and concrete response to the current situation. $550 m is real money which is supposed to help farmers to produce in a sustainable manner food for us who love food."

"This demonstrates that the Commission takes its responsibility towards farmers very seriously and is prepared to back it up with the appropriate funds," he said.

Despite purporting to be a paragon of market forces, the EU Common Agriculture Policy (CAP) is a massively-funded concoction of policies that have caused over-supply, artificially high food prices and subsidies to large producers.

The CAP accounts for over 40 percent of the entire budget of the EU and provides subsidies to farmers as well as a myriad of other projects. But critics say subsidies distort the market and go against the principles of a free market.

Campaign group Reform the CAP says the whole policy is socially unfair. Poor farmers benefit little from the CAP.  Twenty percent of recipients of subsidies reap roughly 80 percent of the direct income support. The group argues that European social policies should be targeted at the poor in general and not at farmers or any other sector.

The CAP has a weak environmental record. Only a tiny fraction of its budget is spent on efficient agri-environmental payments, while environmentally harmful farming practices, such as drainage of wetlands, are still subsidized.

Another major criticism of the CAP is that it imposes high tariffs on imports (around 18 to 28 percent) which has the effect of keeping prices high by restricting competition by non-EU producers.

A further anomaly is that it is hardly a "common" policy as it benefits some member states more than others. France and Spain have larger agriculture sectors than other countries and consequently receive more CAP money than the UK and the Netherlands.

Police Use Water Cannons Against Protesting Farmers in Brussels