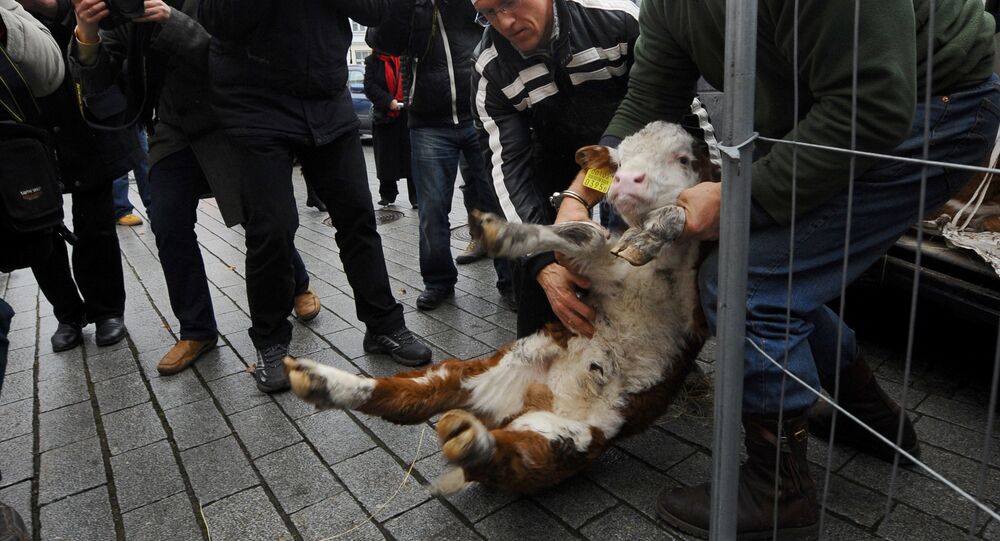 Estonian dairy producers left on the brink of bankruptcy by the Russia-imposed food embargo will take to the streets of Tallinn on September 14 to demand some $7.7 million in financial support from the government, the head of Central Agriculture Trade Union said Tuesday.

TALLINN (Sputnik) — European farmers have been hit by slumping food prices coupled by Russia’s embargo on EU food imports introduced in 2014, causing many of them to declare bankruptcy.

"In the current situation we have to cull 10 percent of our dairy herd. This means we will lose at least a thousand workplaces. This is a serious blow, so next Monday farmers will gather near Toompea Castle in Tallinn to ask for the state's support," Johan Syargava told the Estonian Television channel.

© Photo : @MailOnline
March of Pigs: Angry French Farmers Unleash Swine in Supermarket (VIDEO)
In February, the European Commission transferred a $7.7-million grant to Estonian farmers hit by the crisis and ordered the country’s government to make an additional $7.7 million available to them, which has not yet been paid out.

In total, Estonian agricultural producers could claim up to $167 million in damages due to low prices, undermined by cheap imports, according to experts’ estimates.

On Monday, some 6,000 European farmers protested in Brussels with the hope of urging EU authorities to financially support producers.

Brussels Promises Over $560Mln in Additional Aid to EU Farmers

Police Use Water Cannons Against Protesting Farmers in Brussels