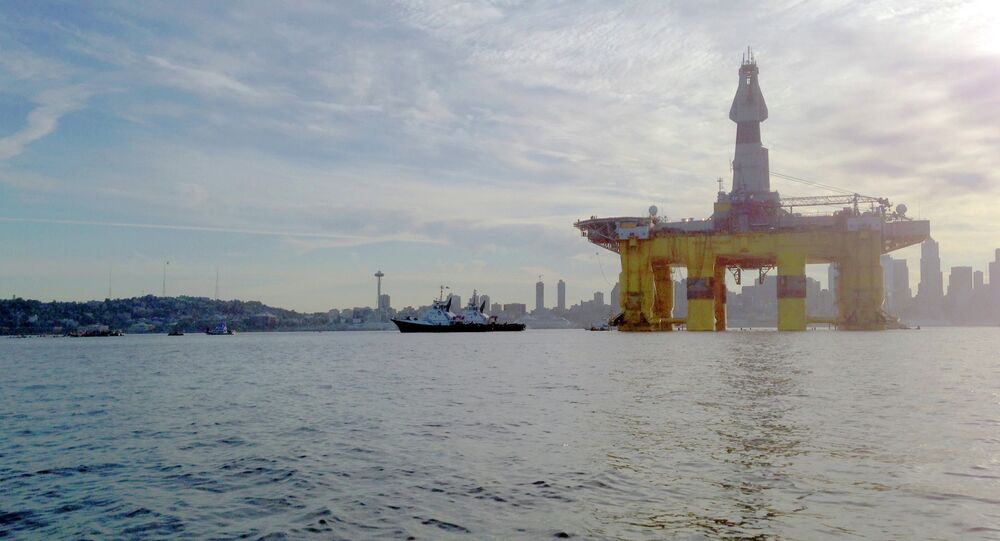 US, Canadian Shale Sectors Doomed if Oil Price Drops Below $45 Per Barrel

As international oil prices tumble, the US shale gas industry gets closer to a major crisis that might eventually lead to bankruptcy of half of companies in energy sector by the end of 2015, experts told Sputnik.

© AP Photo / Richard Drew
Oil Prices Climb to $46 Amid Continued Energy Market Volatility
WASHINGTON (Sputnik) — The US shale gas industry faces a major crisis because of the tumbling international price of oil and half of its companies could be bankrupt or swallowed by rivals in mergers and acquisitions by the end of 2015, experts told Sputnik.

"Half those shale oil and gas fields in the United States are not economically feasible [below] $45 a barrel," Trends Research Institute head Gerald Celente told Sputnik.

Brent crude traded at $48.90 on Wednesday and US crude oil prices fell over 2 percent to $44.40 a barrel, CNBC reported.

Celente warned the crisis had already spread through the Canadian shale oil and gas sector too.

"Canada is in a recession. Their currency has fallen to 2004 levels," Celente said. "Prices are collapsing. … You’re seeing mergers and acquisitions."

Celente said the US energy sector crisis came because it had grown too quickly, thanks to the flood of liquidity from the Quantitative Easing policies of former Federal Reserve Chairman Ben Bernanke.

The inability of some fracking companies to repay their bonds when they became due would pose additional pressures on the US financial system, Celente noted.

© AP Photo / Charlie Riede
Deepwater Horizon Oil Spill: Worst Environmental Disaster in America
"Fifteen percent of junk bonds in the United States are energy sector related. What’s going to happen when they become due and they can’t be paid back?" the analyst asked.

Celente is an American trends forecaster, publisher of the Trends Journal, business consultant and author who makes predictions about the global financial markets.

Muhammad Sahimi, professor of chemical engineering and materials science at the University of Southern California, agreed that the tumbling global oil price was likely to be followed by a dramatic shrinkage in the US oil and gas sector.

"Clearly, if the oil price is too low, shale fracking become un-economical," Sahimi, co-founder and editor of the website, Iran News & Middle East Reports, told Sputnik. "Many of the shale formations are [only] economical for fracking, if the oil price is in the range of $60-$70 a barrel."

Sahimi explained that if the oil price stays low, it would not be economical to continue fracking. "Many of the oil companies that depend on fracking will have a net negative balance sheet this year."

Sahimi warned that 50 percent of all US companies dependent on fracking were at risk of ruin in the current global energy glut.

"I estimate that at least half of such companies are already bankrupt, or will go bankrupt by the end of the current year, if the oil price does not change upward dramatically," he said.

© AP Photo / Rosneft press service
Oil Firms Unlikely to Invest in Arctic Amid Low Prices
Eventually, Sahimi predicted, the combination of bankruptcies, mergers and acquisitions in the United States and Canada with cutbacks in production by some other major global producers would stabilize global oil prices again.

"It will probably hover around $40-50," he explained. "It may last for a while, but cannot last too long. Saudi Arabia can cut back production to raise the price."

Although the Saudi Arabia had maintained high production in the short term to bring economic pressure to bear on Iran, their own need to ensure high annual income meant they had to cut production at some point to restore higher prices, he said.

Putin to Discuss Stabilization of Global Oil Prices With Maduro