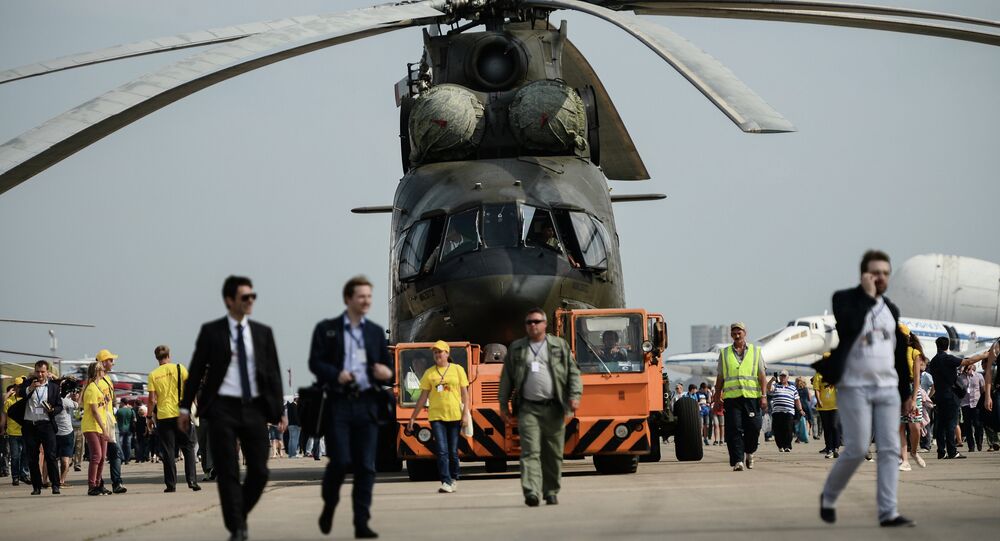 Russia’s largest and most popular international air show MAKS-2015 has wrapped up on Sunday, with contracts signed worth over $5.3 billion in six days.

ZHUKOVSKY (Sputnik), Alexander Mosesov – About 760 companies from 35 countries took part in the annual show, officially called the International Aviation and Space Salon. The show took place in the city of Zhukovsky, Moscow Region, on August 25-30. Over 404,000 visitors attended the salon.

In 2015, MAKS proved that despite the current political tensions between the host country and the Western states and the economic difficulties Russia is facing, the interest in Russia’s aerospace products, technologies and the country’s aerospace market remains particular.

Aircraft manufacturing giants, such as Boeing and Airbus along with world-famous aerospace firms were presented at MAKS, actively participating in negotiations with Russian counterparts from the industry and government officials.

Mostly signed in the civilian aerospace sector, many deals had to do with Russia’s Superjet-100 (SSJ-100), a short-to-medium-haul passenger plane developed by Sukhoi aircraft manufacturer.

Most of these contracts were signed by Sukhoi with Russian air carriers. However, Russia’s Deputy Minister of Industry and Trade Andrei Boginsky stated that Iran was considering purchasing dozens of SSJ-100’s.

1 / 6
© REUTERS / Maxim Shemetov
Visitors walk along a row of planes and helicopters on display at the MAKS International Aviation and Space Salon in Zhukovsky, outside Moscow, Russia, August 25, 2015

In several interviews to Sputnik, airshow participants from Belgium, the United States and Canada showed their readiness to cooperate and deepen relations with Russian aerospace firms and air carriers despite the devaluation of the ruble and the sanctions regime, imposed by Western countries over the crisis in Ukraine.

YouTube/@Ruptly TV
Enter the PAK FA: Sukhoi T-50 Rocks MAKS 2015 Airshow
For instance, Canada’s Marinvent Corporation is actively cooperating with a Russian state-run GosNIIAS research center on avionics certification processes that would help Russian-made aerospace products to be presented on the international market at a time when internal consumption is slowing down amid the economic situation.

Thomas Kallman, head of US exhibition company Kallman Worldwide, told Sputnik that the US pavilion at Russia’s MAKS air show could bring Moscow and Washington closer.

"The idea of the US pavilion itself is not to sell products but to sell relationships. I'm here to prove, to send an example that we can do business together," Kallman said.

The head of Kallman Worldwide, along with representatives of Bombardier aerospace and transportation giant and Canada Eurasia Russia Business Association (CERBA) noted the high level of expertise and the strength of Russia’s aerospace research and development (R&D) sector.

Speaking of the ruble devaluation and the economic crisis in Russia, representative of DEPICON, an EU aviation firm, said that "in time of crisis it is always best to start," commenting on the presentation of a new European aerospace product in the country.