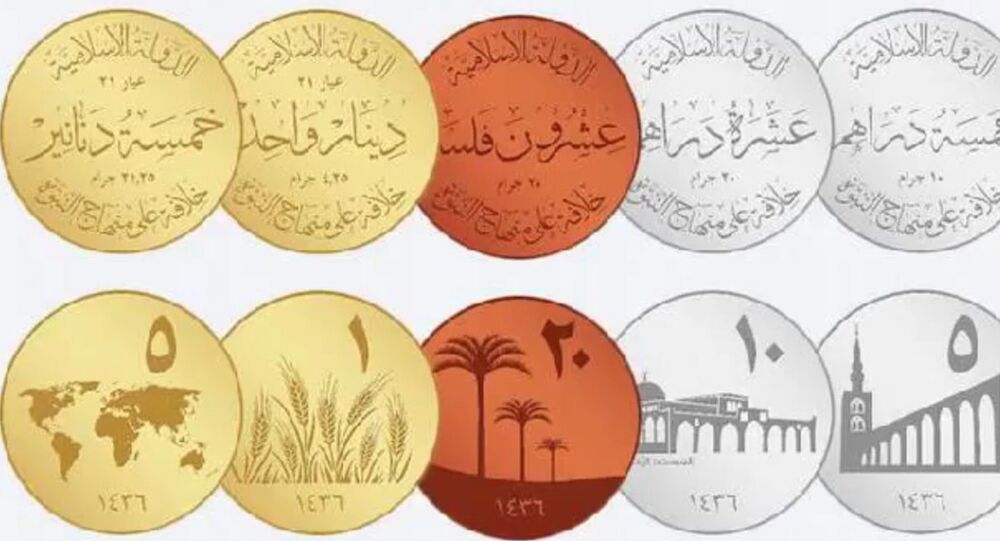 The terrorist group known as ‘Islamic State’ claims to have launched a precious metals-based ‘currency’ and oil-for-gold trading practices in order to undermine the dollar’s dominance in international trade.

Kristian Rouz — In yet another attempt to behave as if they were the government of a nation, the notorious terrorist group Islamic State has just reintroduced a warped version of the gold standard the way it existed a century ago.

Whilst the new ‘currency’ will hardy gain international convertibility, the move might have significant consequences for the global economy, one of them being larger and less predictable fluctuations in gold prices, as the scale of black market operations with precious metals is inevitably poised to grow.

Islamic State released an hour-long video address via their media resource al Hayat, announcing the emission of their precious metals-based ‘currency’ in order to break any ties with the dominance of global capitalism, exercised via the US dollar.

In their own words, the move is designed to separate Islamic State from “the capitalist financial system of enslavement, underpinned by a piece of paper called the Federal Reserve dollar note,” as outlined in the video address.

Interestingly enough, as international gold prices are denominated in US dollars, any precious metals-based payment instrument would automatically have a de-facto peg to the greenback.

Islamic State’s shadow ‘economy’ is based on extortion, bank and jewelry store robberies, ransom and smuggling, and perhaps most prominently, on ‘taxation’ of territories under their military control and oil extraction and refining.

The group boasts their own ‘treasury’, or Beit al Mar, which, possibly, will perform minting of the new coins.

The exact location of minting facilities is unknown, but the fact of the matter is that Islamic State has amassed a significant amount of material wealth, precious metals, in particular, which they are intending to use in order to encourage their supporters and attempt to solidify their presence in the international black market, a situation similar to North Korea’s forgery and international distribution of counterfeit US dollars.

As none of the international transactions of Islamic State are legally allowed, these new coins will be subject to immediate confiscation by legitimate government and international institutions, effectively making the ‘golden dinar’ a black market trading item.

Given the increasing presence of certain notorious governments and large-scale organized outlaw entities in the black market, that could possibly mean the consolidation of the alternative global financial system, existing and performing activities against the laws of the international community.

© REUTERS / Emmanuel Braun
ISIL, Boko Haram Use Drugs as Analogue of Gold – Russian Official
Islamic State intends to collect ‘taxes’ in the new currency as well, allowing local residents under their control to exchange their existing payment instruments for the new coins.

While US intelligence has repeatedly pointed out the economic resources under Islamic State’s control are shrinking, like the number of oil fields, the emission of golden coins and attempts to build an archaic metals-based system of financial transactions is an indication of the entity’s desire for self-sustainability.

It is also a sign that Islamic State is attempting to secure their niche in the club of international outcasts as a modern-day gold-rich Medieval caliphate, selling oil for gold to finance their costly perpetual military operation against contemporary civilization.