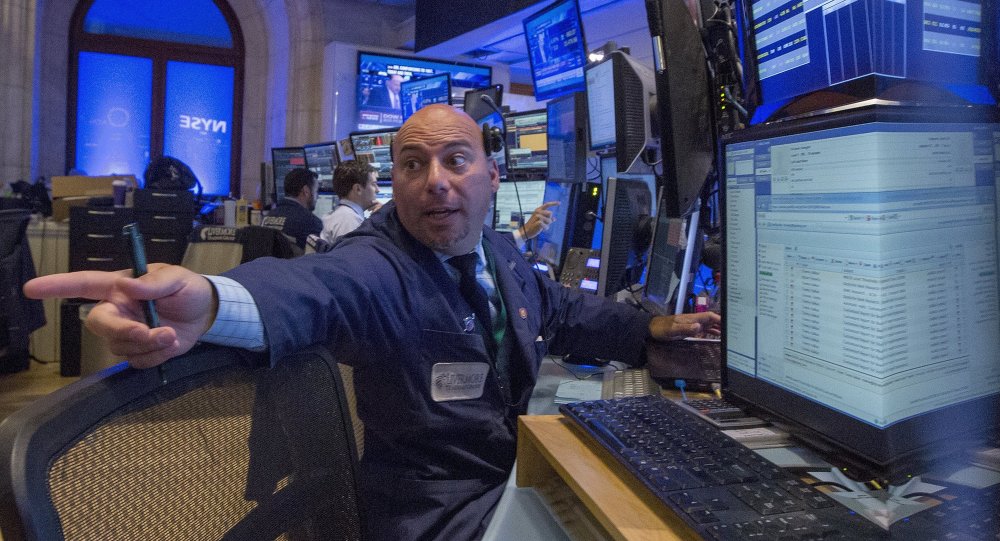 Hundreds of billions of dollars were wiped off Europe’s top share index, as stocks fell sharply after a rout in China unnerved global markets.

The pan-European FTSEurofirst 300 was down 2.8 percent at 1,382.46 points by early Monday, wiping around US$264.04 billion off the index. The STOXX 600 Basic Resources Index, comprising mainly of miners, and the oil & gas sector, fell by 5.5 percent and 3.2 percent respectively, as commodities slumped to multi-year lows on the weakness in China, the world's top metals consumer.

"We are in the midst of a full-blown growth scare… [and] China is at the epicentre" strategists at JP Morgan Cazenove said in a note, adding that recent investor worries might be overdone.

© AP Photo / Richard Drew
'Black Monday': World Markets Plummet
According to Reuters, the VSTOXX, a volatility index, which acts as a crude gauge of investor unease, rose 4 points to hit its highest level since October 2014. Concerns over China knocked the FTSEurofirst 300 last week as it posted its biggest weekly drop since August 2011, and it hit its lowest level since January in early deals on Monday.

China’s stock market has been volatile over several months and some analysts say the boom and bust nature belies an underlying fragility in China’s economy. The crisis has sparked off a wave of uncertainty in other markets as China is a huge importer and exporter around the globe and any fluctuations in its economy will be felt globally.

Societe Generale's analyst Wei Yao told Business Insider that beneath 2015's "insane" stock surge and its effect on the financial economy, the rest of China's economy actually looks pretty ugly. Over the last few years, the industrial sector has dropped significantly, with nominal growth around 1.2 percent year-on-year in the first half of the year. Furthermore, construction decelerated "substantially" from over 10 percent in mid-2014 down to 4.1 percent year-over-year in Q2, according to Yao's data.

© AFP 2019 / Richard Drew
#BlackMonday: Twitter Users Try to Keep Calm Amid Stock Markets Crash
China tried to stabilize the crisis by devaluing the yuan, but many believe the attempt has failed. Despite this, the International Monetary Fund (IMF) says China is moving to a "new normal" of slower yet safer and more sustainable growth.

China’s growth is expected to be 6.8 percent in 2015, down from 7.4 percent last year. This slowdown, in line with the government’s target of around 7 percent, reflects progress in addressing vulnerabilities, especially a needed moderation in real estate investment. The recent stock market correction will not derail the ongoing adjustment to a slower yet more balanced growth path, the report says.

"The challenge now is to take the next steps to a more open and market-based economy," said Markus Rodlauer, IMF mission chief for China.

This will require bold structural reforms, such as moving to a more market-based financial system, improving the management of government finances, and leveling the playing field between state-owned enterprises and the private sector.