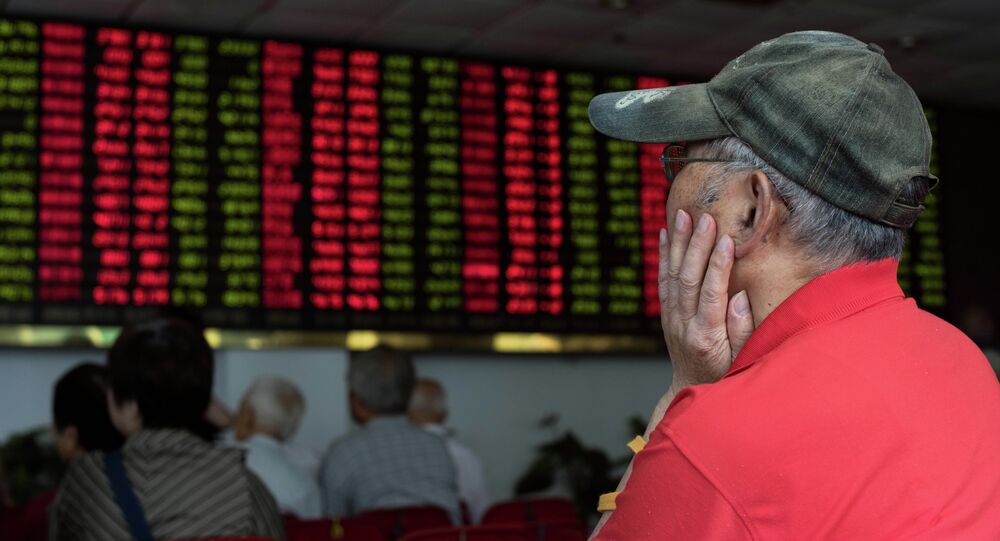 The ‘great Chinese fall’ undermined equities and commodity prices, with investors buying into US Treasuries; as panic spreads in global markets, there are more buying opportunities.

Fixed income assets of the US and the EU rallied, along with the euro and the yen as investors sought safe havens, abandoning emerging markets and riskier financial instruments.

Mainland China’s shares took a severe beating on Monday, rolling way back to their 2007 level in the worst selloff since the most recent global recession in a total negation of the governmental ban on selling bets. Last week, the bag of China’s equities dropped 11%. To investors’ frustration, Beijing failed to deliver any policy response amidst the deteriorating macro data, which arrived over the weekend. Consequently, what was left of the past 1.5-year gains, was ultimately wiped out. The mainland is in a full-blown crisis now.

The CSI 300 Index dropped 8.8% to 3,275.53 points, while the Shanghai Composite crashed 8.5% to 3,209.91 points, to its early 2015 level. All kinds of futures contracts dropped 10%, their one-day limit, suggesting massive further losses. To make things worse, it is still unknown where the bottom of mainland China’s market is, as most statistics are manipulated, so is the renminbi FX rate, which also extended last week’s losses.

Market participants are not expecting any rebounds, except for possible technical corrections. Over 2,000 Chinese stocks are deep into the red, with only 16 ending in the positive territory. Both small capitalization companies and state-controlled giants are falling at a similarly disastrous pace.

The renminbi also crashed 1.04% in off-shore trading, while Beijing simply fixed the official onshore rate at 6.3862 RMB per dollar (0.00%).

The Chinese meltdown continued to negatively affect global crude prices. In the US, oil dropped 3% to $39.20/bbl, while in London crude declined 2.4% to $44.40/bbl, subsequently sliding towards $43/bbl. Brent and WTI crude futures contracts dropped to their 6.5-year lowest.

© AFP 2020 / STR
World Closely Watching Beijing: Will China Face a Mega-Crash?
In other commodities, copper – the world’s indicator of industrial activity – declined 2.5% as mainland China’s manufacturing is severely underperforming. Nickel crashed 4.6% to its 2009 low at $9,730/t on the London Metal Exchange.

Other Asian shares were also affected by what the media dubbed ‘the great fall of China’, a pun at the celebrated archaeological attraction. MSCI’s broader index of Asia-Pacific equities outside of Japan fell 5.1% to its 2012 low on the expectations of further renminbi devaluation. Should Beijing move to ease its monetary policy and pour additional money liquidity into the weakening economy, other developing nations’ currencies will sink silently.

The world is nearing a major financial panic, however, today’s situation is nothing new in economic history. The US Fed is about to start its monetary tightening cycle, while emerging markets are leading a war of devaluations amidst a slowing global growth – exactly the same situation occurred back in 1994. A similar set of events led to the Asian crisis of 1998, where global corporations bought out the greatly depreciated assets in the developing world.

Today’s higher risk exposure in certain emerging markets, like Russia, Turkey, Brazil and South Africa among others, are trapped in the trend of downward adjustment, according to Morgan Stanley terminology, with economies slowing or contracting, currencies weakening, assets and labor depreciating, and deteriorating life quality. While inflation and dollar-denominated debts remain a bigger concern, the current wave of turbulence is not a threat of a global crisis, but is rather a rude reminder of the global economic hierarchy to certain particularly venturous players.