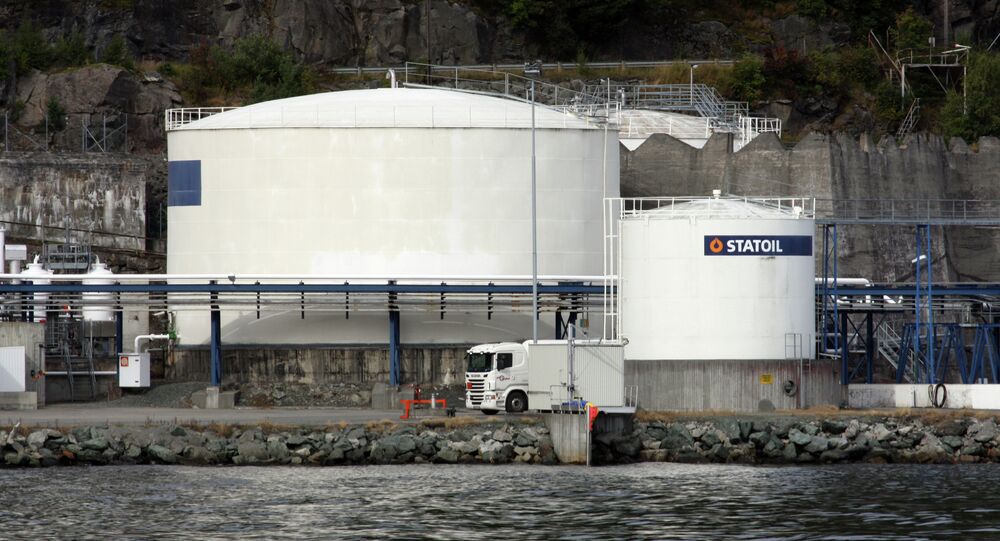 The Ministry of Petroleum and Energy in Norway on Thursday has given green light to the development and operation plan of the oil group Statoil for Johan Sverdrup field.

© AP Photo / Hussein Malla
China Slowdown, US Overproduction Drive Falling Oil Prices
The Norwegian economy has been suffering from significantly falling oil prices and strongly depends on the country's energy sector. That makes the approval of Statoil's project not only a significant boost to the country's oil sector, but also a promise of an improving economy in general.

The fifth largest oil field to ever be found off the Norwegian coast will be developed in several phases. During the first phase, worth 12.7 billion euros, four bridge-linked platforms and three subsea water injection templates are planned. The initial element of the Johan Sverdrup development, the pre-drilling template, was installed on the field last week.

According to Statoil, the development of the offshore field will be cost effictive even with oil prices as low as $40 per barrel.

Initiators of the giant North Sea oil project expect a 70% recovery rate which will allow advanced technology for increased oil recovery in further phases. The phase one development of operations is supposed to yield around 315,000 to 380,000 barrels a day. The first oil extraction is planned for late 2019.

"Focused efforts are now underway in the partnership to ensure that the opportunities and enormous values in the Johan Sverdrup field are captured," executive vice president for Development and Production Norway Arne Sigve Nylund said.

The Johan Sverdrup partnership consists of a number of companies. Among them, Statoil has the largest share of more than 40%.

According to Statoil, the development of the Johan Sverdrup field is an extremely significant industrial project for Norway. Because of the low oil prices, oil companies have limited their investments, and more than 20,000 jobs have been cut in the sector since the beginning of 2014. In May, the unemployment rate in Norway reached 4.3 percent.

Johan Sverdrup is expected to generate $200 billion in revenues within the next 50 years and create 51,000 direct and indirect jobs, which is especially important for Norway these days. Forty-billion kroner contracts have already been awarded, the group said.