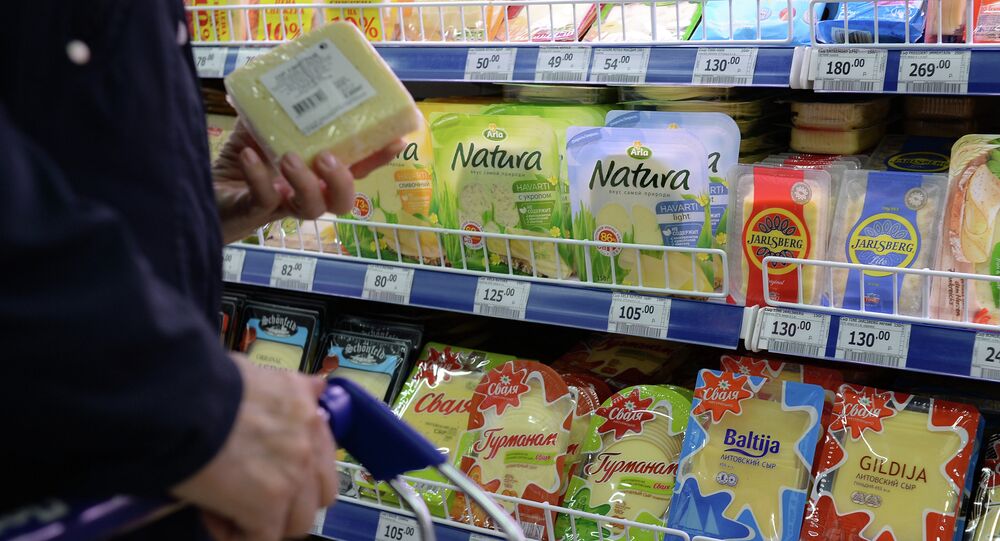 Sputnik provides a detailed story on Russian food embargo. Find out history, details and consequences of Russia’s embargo on import of food from Western countries.

MOSCOW (Sputnik) — On August 6, 2014, Russia imposed a year-long embargo on import of food from the European Union, the United States and some other Western countries, in response to sanctions imposed against it over the Ukraine crisis.

The following day, the Russian government approved and published a black list of agricultural products, raw materials and foodstuffs subject to the import ban, should they originate in the United States, EU member states, Canada, Australia or Norway.

The ban targeted chilled and frozen beef, pork and poultry; salted, dried and smoked meat, fish and crustaceans; mollusks and other invertebrates. It also included milk and dairy products, vegetables, edible roots and tubers, fruits and nuts, sausage and similar meat, meat byproducts and blood products. The list also contained finished products, such as cheese and cottage cheese based on vegetable fats.

In response to the Russian countermeasures, the European Commission implemented an array of steps to support its agricultural producers.

Since August 17, the European Commission has provided 33 million euro ($35.8 million) to support the peach and nectarine market, 125 million euro for producers of perishable fruit and vegetables, with targeted support for the storage of butter, powdered milk and cheese, as well as 30 million euro for programs to promote European agricultural products.

On September 10, the payments were frozen.

For the first time, the list of supported sectors included orange, tangerine, and clementine producers. The subsidy program was also extended to fruit and vegetable producers in the following categories: apples, pears, carrots, cucumbers, peppers, tomatoes, kiwi, plums and table grapes. The new program also established strict criteria for the selection of European agricultural producers who could qualify for compensation. The European Commission was to make decisions based on a analysis of the volumes and trends in their exports to Russia over the past three years.

In December 2014, the European Commission said it was ready to adopt additional emergency market measures for perishable fruit and vegetables in the wake of the Russian ban.

The additional measures were in force until June 2015. They were designed to remove certain categories of products from the market in certain EU countries so they would not influence EU prices.

The initial 2014 list of products banned for import into Russia underwent some changes and eased certain requirements.

Oysters and mussels were taken off the list, but certain provisions were added that completely excluded the import of any of cheeses or lactose-free products, except those vital for people suffering from lactose insufficiency and registered as medicinal and dietary products.

© Sputnik / Alexander Astafyev
Russia Extends Food Imports Embargo
The embargo did not affect alcohol or canned fish, flowers or sweets, as proposed by the heads of various Russian agencies.

On July 30, 2015, the European Commission extended its agricultural support measures, introduced in response to the Russian embargo.

Copa-Cogeca, an association of European farmers and agri-cooperatives, has estimated that, as of late July 2015, agricultural producers in EU countries have lost 5.5 billion euro as a result of the Russian food embargo.

The Austrian Institute for Economic Research (Wifo) said that the economic crisis in Russia, partially caused by the EU sanctions, could cost Europe 100 billion euro and two million jobs in the next few years. The European Commission has an opposing opinion, assessing the consequences of the anti-Russian sanctions as "relatively insignificant" and manageable.

Earlier this year, Medvedev stated that during the first months of 2015, imports of sanctioned products dropped by at least a third, but "the market almost did not notice that."

On Tuesday, the Russian Agricultural Ministry announced that it was drafting a bill that would ban certain food imports from seven more countries — Albania, Montenegro, Norway, Iceland, Liechtenstein, Ukraine and Georgia — as they supported the latest EU extension of the restrictive measures against Russia.