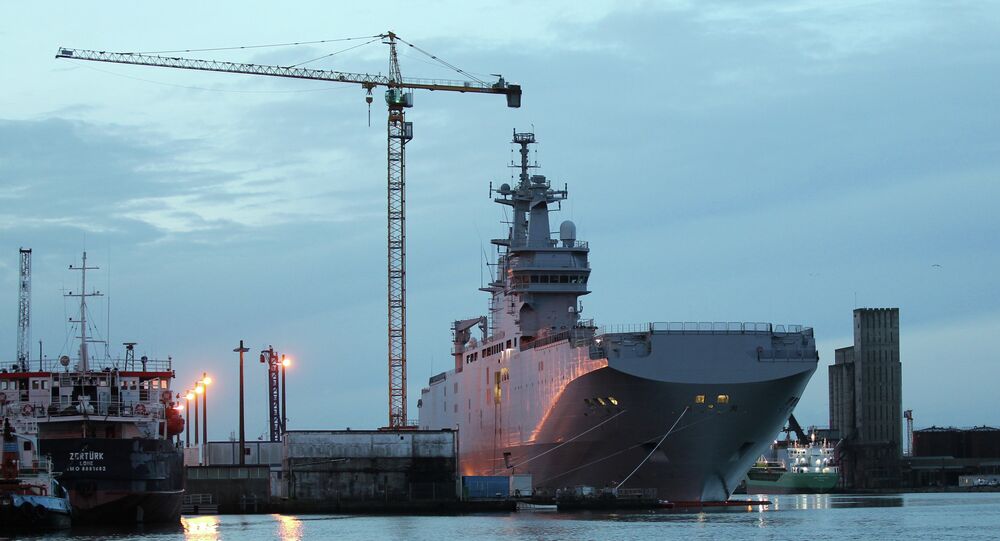 France is rumored to have agreed to pay Russia 1.16 billion euros ($1.27 billion) as a compensation for refusing to deliver two Mistral-class amphibious assault ships built for the Russian Navy, the Kommersant newspaper reported, citing unnamed sources.

The exact amount of the compensation has been agreed upon during the talks between Russia's Deputy Prime Minister Dmitry Rogozin and French Defense Secretary-General Louis Gautier, the daily added. It covers the advance payment and additional costs Moscow incurred during crew training, creating infrastructure to station vessels in Vladivostok and developing four preproduction prototypes of the Ka-52K helicopters.

© Sputnik / Grigoriy Sisoev
Mistral Troubles: France Balancing Between Financial and Image Losses
The stern sections built in Russia will not be taken down, according to the sources. Russia's Ministry of Defense is expected to return the end-user certificates after Paris pays the compensation. France will be able to sell the warships to a third party afterwards.

All issues, according to the Kommersant, could be settled in early August. Then Russian President Vladimir Putin and his French counterpart François Hollande will make an official announcement.

Earlier, on Thursday, Putin's aide Vladimir Kozhin said that Russia and France agreed the terms of the settlement of the $1.36-billion deal, including the schedule and the amount of compensation. On Friday, Kremlin spokesperson Dmitry Peskov said he had nothing to add to this information.

Following the announcement, the French took to Twitter to vent their anger over the cancellation of the deal.

"Hollande has lost 1.16 billion euros due to his incompetence," one user said.

"Where does Hollande plan to get the 1.16 billion euros?" asked Franck Chouquet.

"The decision to suspend the delivery of the Mistrals will cost us 1.2 billion euros. This is nearly 20 euros from every French national," another user pointed out.

French politician and member of the National Assembly Nicolas Dupont-Aignan called the settlement "shameful," adding that 1.2 billion euros "have gone out the window."

"Are the countries that insisted on the Mistral non-delivery buy the ships or share the compensation costs?" asked another Twitter user.

© AFP 2021 / GEORGES GOBET
The Sevastopol mistral warship is on its way for its first sea trials, on March 16, 2015 off Saint-Nazaire.

In 2011, Russia and France inked a deal for the delivery of two Mistral-class helicopter carriers, dubbed Vladivostok and Sevastopol.

The Mistral deliveries were put on hold in late 2014 over Moscow's alleged involvement in the Ukrainian civil war. The Kremlin has repeatedly said Russia is not a party to the deadly conflict and pushed for peace in the war-torn nation.