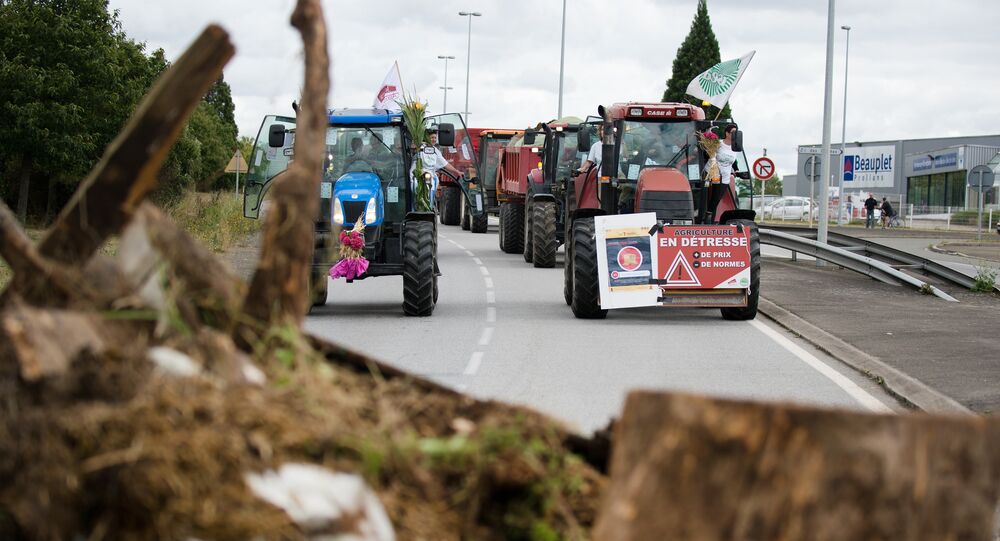 According to the MODEF director, the producers are selling their products at a very low price today, lower than the cost of production.

On Sunday, French farmers blocked roads from Spain and Germany in protest against foreign products entering the country and falling food prices. According to various estimates, every tenth livestock farm in France is on the brink of bankruptcy.

"Imposing the sanctions against Russia and vice versa affected the agricultural sector mainly not because of the amount of products being exported, but because ceasing the export even in small quantities destabilizes domestic markets in Europe," Gaignerot said.

According to the MODEF director, the producers are selling their products at a very low price today, lower than the cost of production.

© Sputnik / Dmitriy Korobeinikov
Italian Companies Lose About €8 Mln Euros a Day Due to Sanctions
"The essential reason for this is that the prices in the European domestic markets have plateaued. Right now we are facing a situation where there is no coherence between the amount of product being imported and being exported, which is at least 'anti-economic' for our agriculture," he added.

The European Union, along with the United States and other Western nations, imposed sanctions against Russia over its alleged involvement in the Ukrainian crisis. In June, the sanctions were extended for an additional six months.

In response to the extension, Moscow prolonged its one-year food import ban, introduced in August 2014 against countries that had targeted it with economic restrictions.

After the introduction of Russia's 2014 food embargo, the European Union activated emergency measures to support farmers, including market withdrawals for some fruit and vegetables and compensation for non-harvesting, running to hundreds of millions dollars.

EU ambassador to Russia Vygaudas Usackas said in August 2014 that the European Union could lose up to 12 billion euro ($16 billion) in lost earnings because of Russia’s ban on food imports.