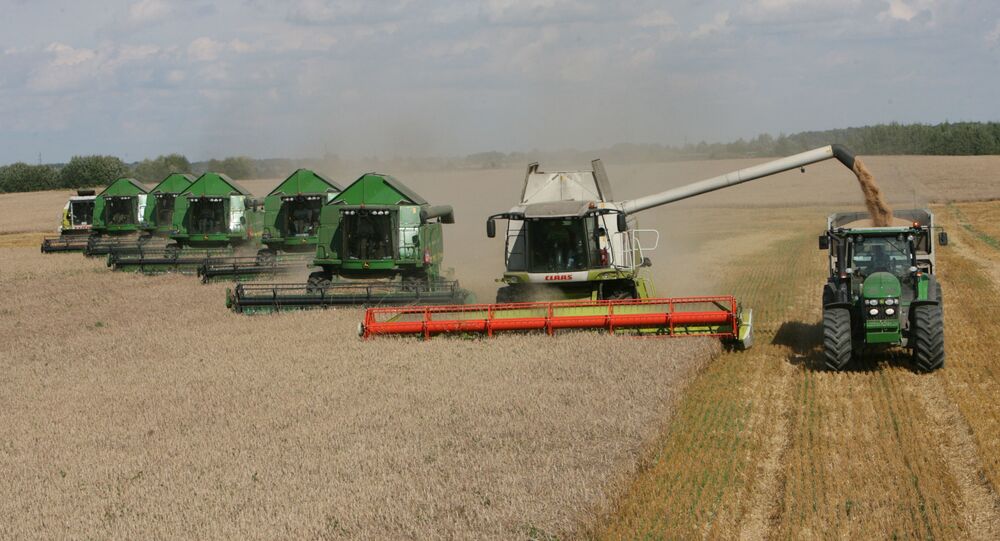 In a recent article published in the Russian edition of Chinese state newspaper People's Daily, China expert Grigoriy Trofimchuk stated that it would serve Russia well to give serious consideration to Chinese proposals to help turn the Russian Far East into the breadbasket of Asia.

In his op-ed, Trofimchuk, the head of the Asian Initiative Fund, noted that Chinese representatives at last month's St. Petersburg International Economic Forum proposed that Russia "use the virgin expanses of potentially arable land in the Russian Far East for food production on an industrial scale." This, in China's view, "would bring enormous benefits not only to Russia but to the whole of Asia."

In the expert's view, the Chinese proposal would allow Russia, with China's help, to "reconfigure the entire economic picture of the world, taking account of the scale [of the project to activate] the as-yet inactive virgin lands of the Far East."

© Sputnik / Grigoriy Sisoev
Large Russia-China Investment Projects Inked at St. Petersburg Forum
Trofimchuk argues that there are three major hurdles connected to agricultural production in the Far East. The first is the financial issue; preparing the Far East for agricultural production would require a great deal of money, especially "keeping in mind that the soil of the Far East is far from the black soil of the Kursk or Tambov regions" in terms of its fertility.

The second issue, cited by experts in the field, is that agriculture in the Far East may not even be possible without the uncertain combination of good weather, good fortune and GMOs; Russian law presently prohibits the use of Genetically Modified Organisms.

Third is the fact that "Russia itself has no corresponding large-scale projects, and lacks the amounts of equipment and human resources required for the development of these huge territories, which are an order of magnitude larger than the Kazakh territories of the [Soviet] Virgin Lands Campaign of the 20th century."

© Sputnik / Aleksandr Kondratuk
Chinese Media Hails Russia-China Deal on Far East Land's Lease for 50 Years
Moreover, the expert notes, negative perceptions toward Chinese agricultural projects persist among the people of the Far East themselves, with media citing local residents in regions neighboring China "who believe that the mass participation of the Chinese in agricultural projects will result in the soil being worn out and destroyed in the space of a few years," and "in the Chinese themselves privatizing the land for themselves."

In Trofimchuk's view, "China, having raised the question" in such a serious and public way, "could help Russia in each of these areas, including on the question of GMOs, since Asian countries, which are ready to pay for the fruit of the hypothetical Far Eastern virgin lands, have no special restrictions on the consumption of foods with this scary inscription."

Furthermore, the analyst argues that the disadvantages and drawbacks of the proposals must be balanced against the tremendous possible benefits. "After all, the supply of agriculture grown in the Far East, even if it is limited to just cereals…to two billion people in Asia, would be much easier and more strategically appropriate than the building of pipelines across the country and around the world carrying nonrenewable hydrocarbon energy. Even if Asia were to buy Russian food at relatively modest prices, this would be made up for by the tremendous volumes of export."

© Flickr / Mark Turner
Russia, China Setting up $2 Bln Agriculture Projects Joint Investment Fund
Moreover, in Trofimchuk's view, Russia would benefit "from the strengthening of its own agricultural base," giving the country the food security so actively sought today by proponents of import substitution. "And then the country will have nothing more to fear from any sanctions or bad harvests."

When it comes to the highly sensitive question of administering the project, Trofimchuk argues that here, China "would not be likely to see themselves as the organizers of the Far Eastern virgin lands…Naturally, development must be supervised by Russian agricultural technicians and agronomists. Still, the Chinese could help with their technology and their people."

Ultimately, Trofimchuk argues that the Chinese proposal to turn the Russian Far East into the breadbasket of Asia, which wouldn't be made at a public forum unless it was serious, deserves serious consideration by both the Russian leadership and the Russian people.