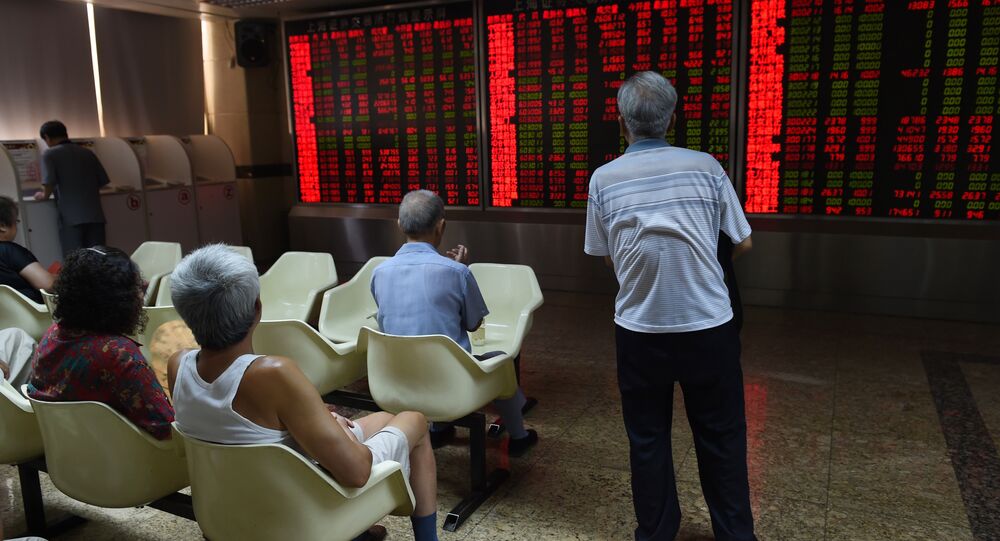 As mainland China’s financial situation worsens, the overall economic turmoil is threatening to flip over the fragile growth in nations most exposed to the Chinese risk, with the rest to follow into a global meltdown, far exceeding in scale the Great Depression.

© AFP 2020 / CHINA OUT
China’s Stock Slump Widens as Stimulus Fails to Calm Investors
Kristian Rouz — The dramatic decline in mainland China's bourses, which began on June 12 and received only limited episodes of government-backed relief, has had significant spillovers for the overseas markets, in both advanced and developing nations. Whilst the capital flight for the safer assets and decline in commodities' prices are only the tip of the iceberg, the increased scale of fluctuations in global financials and major shifts in international trading in money and goods have all stirred deeper and longer-lasting effects in the world economy. Albeit the government in Beijing is attempting to stabilize the situation by having introduced monetary stimulus, the Chinese stock panic is threatening to throw a large part of modern civilization into a full-blown economic demise, in a fashion similar to the Great Depression of the 1930s.

The fallout in mainland China's stock market started on June 12, and has led to a dramatic selloff in stocks across the sectors listed on the major indices of Shanghai and Shenzhen. Almost a month after the demise started, mainland's stock markets have witnessed the equivalent of $3.9 trln of wealth vanish in what has become the greatest financial meltdown in China's recent history. Among the biggest losers have been, besides the banking sector and the real estate, some 90 mln Chinese individuals, participating in stocks trading and comprising some 85% of all mainland investors.

While China's middle class has suffered a major blow to its well-being, the consumer demand is only poised to suffer. As the mainland's economic expansion is slowing even below the less-than-acceptable 7%, Beijing's hopes to readjust the nation's economy towards domestically-driven production are now significantly impaired.

During last two trading sessions, on Thursday and Friday, the mainland's indices have rebounded slightly — but only because the government ruled to halt trading in stocks of 45% of the listed companies, after having banned any IPOs. That said, the recent wave of relief based on China's halted crash is very preliminary. Mainland's bursting bubble is half-frozen, and Beijing's further actions are hard to predict, leaving a lot of uncertainty in global finance. Lack of clarity, in turn, is a best friend to bear market.

© AP Photo / Mark Schiefelbein
Chinese Stock Market Rises Amid Government Measures
Since 12 June. The Shanghai Composite Index lost 35% of its valuation, slightly rebounding toward the end of this outgoing week. The partial freeze in stock trading has affected over 1,400 listed companies, meanwhile, investors are seeking any opportunity to sell. Volatility measure for Chinese markets has jumped to 56, its highest since 2008, and is now five times the volatility of the S&P 500 in New York.

Up to now, the worst day for China's equity markets was July 8, when the decline turned into a full-blown panic, sending shockwaves across the globe. On that day, the Shanghai index crashed a staggering 6%, immediately sending the stock-connected Hong Kong 6% down as well, and also hitting Tokyo's Nikkei Index.

The most significant domestic risk for the mainland is the still the outstanding amount of margin debt. That means, during the year prior to June 12 the Chinese individual investors would borrow money from the bank, invest it in stock, effectively paying off their debt and enjoying stunning profits later. Thus, mainland's almost twofold rise in stock over the year 2014-2015 was fueled by borrowed money. Now, as the stocks have slumped, many investors are still in debt, the total amount of this margin debt is estimated at $232 bln — an outstanding figure, undermining the well-being of some 50 mln Chinese middle class. As the situation unravels, social unrest is likely, and this is Beijing's biggest fear.

The government allocated some $42 bln to halt the market crash, but this is utterly insufficient. Paired with the partial freeze in trading, this money can pay Beijing several days (like the course of events in New York on 24-29 October, 1929), but you can't mislead the market. The bottom is yet to be reached.

And here is where the global risks emerge. Set aside the possible social and/or political chaos in the mainland, the purely economic effects of China's accelerated slowdown, enhanced by the ongoing financial implosion, would be a dramatic decline in commodities prices, a rapid above-the-real-economy rise in the European and, to a lesser extent, US stocks (prompting financial bubbles there), as well as uncertainty in global trade.

Mainland China had been the driving force behind the global growth of the last 10-15 years. Being the world's biggest industrial producer of both consumer goods and low-end mechanical parts and tech hardware, the Communist nation had been the price-determining actor in global commodities trade. Mainland China is one of the world's largest oil consumers, and a dramatic economic demise will inevitably weigh on the barrel's valuation. According to the Japan Oil, Gas and Metals National Corporation (JOGMEC) estimates, if the Chinese crisis unravels further, a barrel of US oil will cost some $45 this October. Consequently, the already struggling oil exporting nations will face greater fiscal difficulties.

Iron ore will be another victim to see a slump in demand from mainland China, effectively losing value. That means Australia's economy will be first in line to take a blow, as the nation is the main exporter of iron ore to China. The mainland is already producing 10 times more steel than its domestic market is able to consume, meaning the excessive steel produce is likely to be exported in the nearest future.

At this point, investors are all looking to the Q2 growth data for mainland China, due July 15. The economy is likely to underperform, but if the data is too dramatic the stock rout is bound to widen. Although the value-to-earnings ratio for the Chinese bourses dropped to 57 from 108 at the top of the rally earlier this year, it is still far above the 16.5 in New York. For comparison's sake, the figure of 25 is perceived as dangerously high, meaning the greater decline in Shanghai and Shenzhen is yet to come.

China’s Stocks Retreat Most Since 2008 as Margin Trading Shrinks