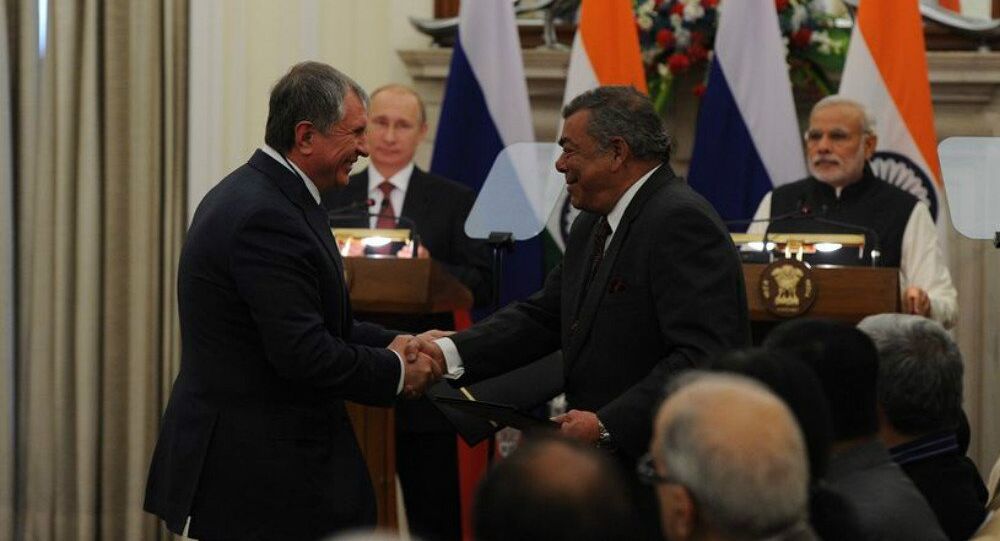 The Russian energy company signed a deal with the Indian conglomerate Essar to deliver oil over a period of ten years, and agreed to buy a 49 percent stake in India's second-largest oil refinery.

© AP Photo / Mikhail Metzel, File
Giving Access to Russian Arctic Shelf May Hurt Rosneft Oil Projects – CEO
Russian oil and gas producer Rosneft signed an agreement with the Indian corporation Essar on Wednesday to supply oil to its Vadinar oil refinery for ten years; as part of the agreement, the parties also agreed that Rosneft will obtain a 49 percent stake in Essar's Vadinar refinery, one of the largest in India.

"The agreement which was reached is of a strategic nature," said Rosneft's President Igor Sechin in a press release on Wednesday.

"The realization of this agreement will have a substantial impact on the scale of economic cooperation between Russia and India. The turnover of goods between the two countries will grow more than 50%."

The agreement was signed on Wednesday at the BRICS summit which is currently taking place in Ufa, Russia, and follows a previous agreement reached by the two companies in New Delhi in December, in the presence of Indian Prime Minister Narendra Modi and Russian President Vladimir Putin.

© Sputnik / Maksim Blinov
Rosneft Working With Sinopec on Payments in National Currencies
Essar, a multinational with investments in steel, energy, and infrastructure as well as a portfolio of services including shipping, business process outsourcing [BPO] and telecoms, announced on Thursday that under the terms of the agreement, Rosneft will supply its Vadinar refinery with 10 million tons of crude oil per year for ten years.

In addition, the companies agreed for Rosneft to obtain equity capital of up to 49 percent in Essar Oil Ltd, which operates the Vadinar refinery and has around 1,500 oil retail outlets in India, with another 1,500 in various stages of planning.

"The strategic potential of the agreement reached between Rosneft – a global leader of hydrocarbon production – and Essar – a world’s leading player in the refining area – can hardly be overestimated," said Sechin in December.

"For our Indian partners, the signing of this agreement represents a vital element of basic supplies diversification which, at the same time, will ensure energy security for the country. The Russian counterpart, in turn, will obtain the possibility of production and supplies volume planning to a new region with considerable growth potential," stated Sechin in December, who also visited the refinery in Vadinar, which is India's second largest, and one of the biggest in the Indo-Pacific region.