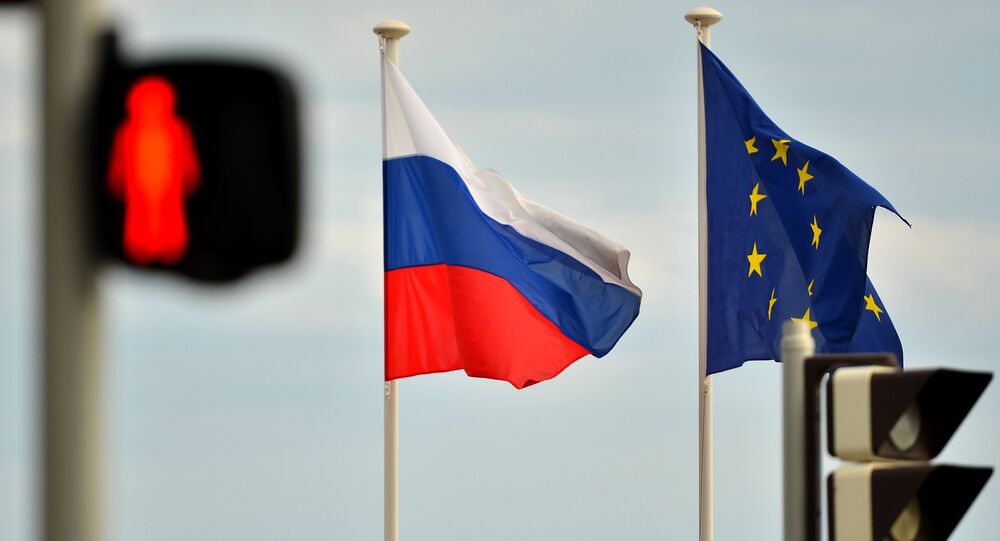 The Austrian Institute of Economic Research (WIFO) published a monograph clarifying the projected short and long-term costs of anti-Russian sanctions to the EU 28 plus Switzerland. A summary of the report published Friday has confirmed that Europe as a whole expects €92.34 billion in long-term losses, along with over 2.2 million lost jobs.

© Flickr / European External Action Service
Mugging the Mediator: Poroshenko Pushes for Sanctions as Ceasefire Crumbles
While the report attempts to downplay somewhat the losses attributed to sanctions, noting that politicized export restrictions must be considered together with the ongoing Russian recession and other factors, the figures speak for themselves.

The report projects an "observed decline in exports and tourism expenditures of €34 billion value added in the short run, with employment effects on up to 0.9 million people." Switching to a longer-term perspective, the report estimates "the economic effects increas[ing] to up to 2.2 million jobs (around 1 percent of total employment) and €92 billion (0.8 percent of total value added), respectively."

Commenting on the geographical disbursement of the economic and jobs losses, WIFO's report shows that "geographical closeness highly correlates with the relative size of the effects at the national level, with the Baltic countries, Finland and the Eastern European countries being hit above the EU average of 0.3 percent of GDP in the short and 0.8 percent in the long run." The report also notes that Germany, which accounts for nearly 30 percent of all EU 27 exports to Russia, has been hit the hardest in absolute terms, and is projected to lose €23.38 billion in losses in the long term. Italy is second, with €10.93 billion in projected losses. France rounds out the top three with €7.92 billion in losses.

The study's figures also show that Estonia is the single most heavily affected country in both the short and the long term, with the country suffering a €800 million (4.91 percent) and €2.1 billion (13.24 percent) decline, respectively. Estonia is followed by Lithuania (-6.37 percent long term), Cyprus (-3.25 percent), Latvia (-1.87 percent), and the Czech Republic (-1.53 percent).

As for the economic sectors most heavily impacted, the WIFO study found that agriculture and food products, metal products, machine-building, vehicles, and manufacturing-related services are hardest hit in the short term, with construction, business services, and wholesale and retail trade services also projected to suffer disproportionately in the long-term.

Fotohost agency
BRICS Market Ensures Economic Independence From West - India Delegate
Speaking to Radio Sputnik about the report, WIFO economist Oliver Fritz noted that while EU politicians still hope that the sanctions will have some effect on Russian policy, pressure is building on them to change their policy, since the economic consequences are rapidly beginning to add up.

While the economist noted that he does not see the sanctions being lifted in the short term, with German Chancellor Angela Merkel successfully keeping other EU nations in line, Fritz noted that as losses mount, EU politicians may eventually decide to consider rethinking their decisions.

Since March 2014, the United States, European Union, and other Western countries have placed sanctions on Russia’s banking, defense and energy sectors over Moscow's alleged role in the Ukrainian crisis. In August, Moscow imposed a year-long food embargo on the countries that had sanctioned it. Last month, the EU's foreign ministers agreed to extend sanctions against Russia until January 31, 2016.