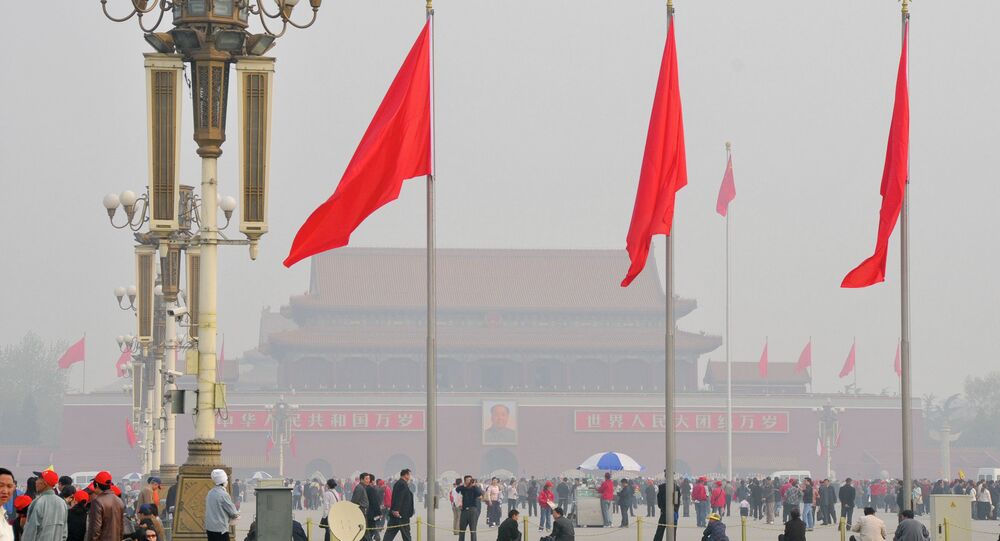 Beijing's One Belt, One Road initiative, a viable alternative to China's vulnerable sea routes through the South China Sea, is aimed at bolstering China's economy and preventing the US from imposing a distant blockade of the country, Stratfor notes.

Beijing's "Belt and Road" will be in fact a sum of six transport corridors across Eurasia, comprising of both land and maritime components, the analysts elaborated.

"The strategy behind the Belt and Road Initiative is to diversify transit lines, thereby mitigating China's vulnerability to external economic disruption and reinvigorating China's slowing economy. Ideally, China would like to link its inland cities to global markets with a diversified network of transit routes and energy pipelines, many of which would take inland routes and serve as alternatives to existing sea-lanes," the Stratfor report stated.

© REUTERS / US Navy
US Seeks Confrontation With China, Fuels Tensions Worldwide – German Media
Since China's economy is heavily reliant on foreign trade and energy supplies through the country's "vulnerable" sea routes, it would be "relatively easy" for a potential adversary to disrupt China's trade and block the country.

"US war planners have certainly not ignored China's geographic vulnerability… In the case of a war between the United States and China, many US strategists favor imposing a distant blockade of Chinese waters," the analysts pointed out.

© Flickr / dawpa2000
China’s Interest in Pakistan May Stretch Scope of Its Power Across Asia
Thus far, by launching the Belt and Road initiative Beijing is seeking to mitigate such a risk, constructing a network of transit routes across Eurasia in order to avoid a "single point of failure."

Beijing is planning to improve existing transportation networks, build new ones and construct new energy pipelines and transport hubs. Remarkably, China has already built a number of such hubs in Eurasia and now it will have to simply link existing segments of infrastructure into a comprehensive network.

"The Belt and Road investments will also serve to build political support for China. Many countries along the proposed transportation corridors face huge budget shortfalls in the area of infrastructure development, together totaling trillions of dollars between 2010 and 2020," the Stratfor report read, adding that "with its large financial resources, China is well poised to fill some of these gaps."

© Sputnik / Michael Klimentyev
Eurasian Heartland: Silk Road and EEU to Solidify Sino-Russian Relations
The analysts underscored that China may face certain security and political obstacles while accomplishing its ambitious project. For instance, Beijing will have to build a number of transport routes through undeveloped and troublesome regions. Furthermore, China is also facing a substantial threat posed by Xinjiang separatist insurgents, the analysts noted.

However, if China succeeds in implementing the Belt and Road project it will obtain several alternatives to its vulnerable South China Sea-lanes that "would greatly complicate potential US plans to impose a distant blockade" in an instance of war.

"Inland transit routes would naturally be insulated against naval interdiction, and the proliferation of short maritime transit legs would force the US Navy to spread its assets over a large expanse rather than concentrate on a small number of chokepoints. In peacetime, these options would enhance China's political leverage by preventing any individual country from threatening to disrupt China's economic lifelines," Stratfor's analysts concluded.

China is Not ‘Seeking Hegemony’ as Rising Power - Foreign Minister

US Encourages South China Sea Claimants to Freeze All Reclamation