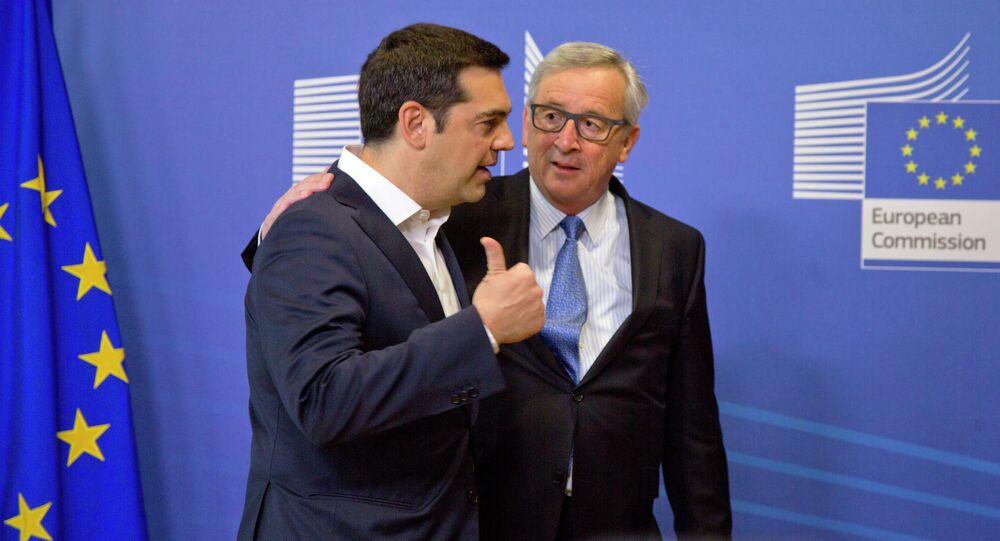 The Greek government needs to inform its people what is at stake if the country defaults and exits the Eurozone, European Commission President Jean-Claude Juncker said Monday.

BRUSSELS (Sputnik) – Greece still remains part of the European Union and they should not let each other down, Juncker said.

“It is time and it’s Greece's responsibility to tell its people what is at stake. This is a moment of truth,” Juncker said.

A “no vote” on Greece’s referendum on its debt bailout program will have catastrophic consequences and will mean a “no” to Europe, the EC president said.

“A ‘no,’ regardless of the final question asked, will mean that Greece says ‘no’ to Europe.”

“I want to say simply that beyond Greece, it must be understood that an announcement of ‘no’ will be catastrophic for the continuation of events,” Juncker told journalists in Brussels.

Athens’ exit from the eurozone will never be an option in solving the debt issue, the European Commission president said.

"Over the last five months I have been personally involved in the entire process of negotiations, sometimes day, sometimes night. For me, Greece’s exit from the eurozone has never been and will never be an option."

© AFP 2020 / ANGELOS TZORTZINIS
Tsipras: Bank of Greece to Suspend Bank Service, Introduce Capital Controls
Greece has been holding talks with its international creditors on the settlement of the country's multi-billion dollar debt, as the current bailout program expires on Tuesday. The latest round of talks ended Saturday, with no agreement.

As the Greek aid package expires on Tuesday, Athens must deliver the next $1.7-billion payment to one of its major creditors, the International Monetary Fund (IMF). If the sides fail to reach a deal, Greece may default on its debt and be forced to exit the eurozone.

He also said that no plans for cuts in retirees’ pensions were included in Greece’s reformations.