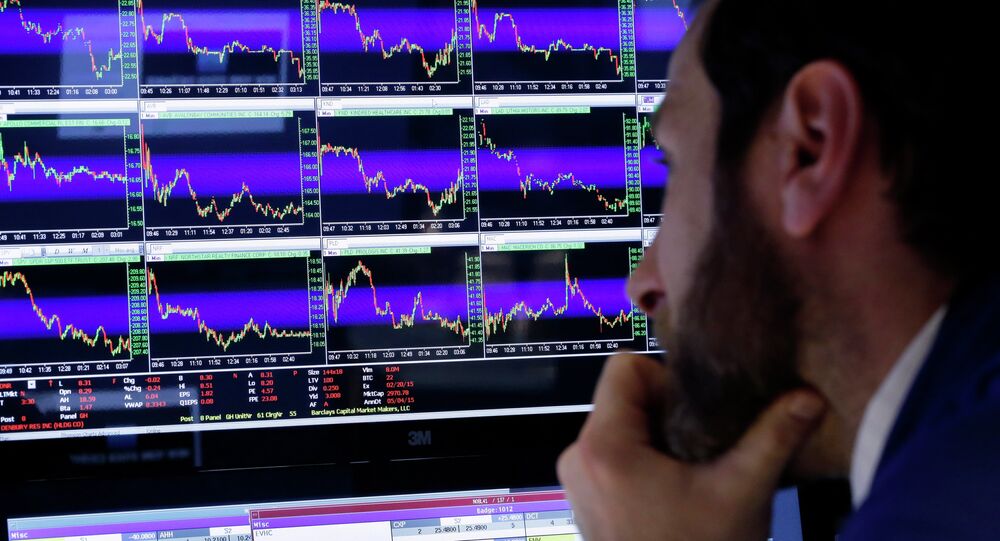 Kristian Rouz – The upcoming week will be marred with greatest uncertainty are persisting volatility in quite a long time after the Chinese central bank implemented a wider stimulus to stave off the national stock market collapse, and Greek negotiations fell apart.

© REUTERS / David Gray/Files
After Stocks Crash Biggest Since 1996, Mainland China Cuts Interest Rate
In the newly forming financial reality, where the common European currency is poised to collapse beyond the dollar’s value, and the undervalued Chinese currency flooding Asian markets, the valuation in fixed income papers is becoming a more reliable marker of investment appeal and the overall economic health. This is chiefly because global stock markets are prone to advance far above their feasible ceilings amidst the abundance of artificial monetary liquidity. As scale of financial speculation expands worldwide, we are likely to witness more capital risks in the upcoming months.

Wall Street is likely to sway between gains and losses dramatically early this coming week, with the rest major markets to follow. The first factor is the perceived risk pinnacle in the Greek situation, where debt talks ended unsuccessfully with the nation preparing for bank lockdowns, capital control and, finally, a technical default and exit from the euro.

Another concern is China’s full-scale stimulus, effective today, the only major effect of which is basically pumping more money liquidity into the national market. Given the current trend of capital flight from the staggering Communist economy, the PBoC-released liquidity will end up in the overseas capital markets.

© AP Photo / Petros Giannakouris
Bailout Program for Greece Amounts to 'Economic Version of Dante's Hell'
Ultimately, ever the Greek meltdown will only push global stocks up, as the imminent devaluation of the euro will release a massive amount of the common-currency denominated money liquidity as a consequence of the massive sell-off in the euro assets. In the end, the enormous volume of money will flood stock markets, the latter turning into huge speculative bubbles instead of being rooted, albeit loosely, in the real economy and regulative measures, including monetary and fiscal policy.

Now, how do you tell better investment opportunity in this warped reality? Watch the bonds.

The first reaction of the European fixed-income market to further negative developments in the Greek situation will provide clues to how the situation will unfold. The first ones to watch are similar to the Greek ones riskier debt assets of fellow Southern European nations, namely, Italy, Spain and Portugal.

The Greek debt deadlock has been muddying the waters of European financial markets for good five months already, and losses in other European bond markets have been minimal thus far. One of the reasons is the bond-buying programme, undertaken by the European Central Bank, which guarantees a steady demand for 1 trln euros worth of bonds each month, encouraging jumpy investors to buy in. Prior to the ECB stimulus, any sign of turmoil would trigger sell-offs in the riskiest bonds, which are, naturally, the Southern European ones.

The decisive moment will be this Monday, when the Greek concerns will be pushing peripheral yields up with bond value effectively declining.  In case the ECB act decisively enough to stave off the Greek spillovers to the regional markets, investors’ confidence will be restored quickly. The excessive liquidity produced by Grexit will be effectively absorbed by the bond market without pushing the regional – and global – stocks to the sky.

© REUTERS / Wolfgang Rattay
ECB to Keep Emergency Funding to Greek Banks at Current Level
However, if the ECB fails to reassure the market of its ability to utilize the spare euro liquidity, the most negative scenario might unravel, as the current situation is rather volatile. The Portuguese stocks are now 1.7% higher annualized, while the Italian 10-year debt yields 2.15%, as of Friday, twice as much as at the record lowest of 1.03% showcased in March.

Adding to the abundance of liquidity, the market structure itself suggests more risk to the global financials. According to observations by the Bank of International Settlements (BIS), the global debt market is overtly centralized, with the 20 biggest management enterprises exercising control over some 40% of all assets. The total volume of the managed assets was some $75 trln in 2013 and growing after having nearly doubled in the past 10 years.

The Chinese stimulus further exacerbated the situation. By releasing the excessive liquidity to the market, Beijing made clear they are ready to fuel the stock bubbles further, after the nation’s stock market had inflated some 120% over the year prior to last two weeks, when the Chinese stocks slumped 20%.

China’s stock market is worth $11.5 trln, or 115% its economy while China’s debt accounts for $28 trln, or 280% its GDP. Give the capital flight from the mainland through Hong Kong, out and away, all these dozens of trillions of virtual money are also fueling global stocks.

Meanwhile, the world’s real economy is projected to expand by only 3.5% in 2015, fluctuating between 3.5% and 4.0% during next five years. That said, the rapid build-up in volumes of virtual money liquidity on a global scale will ultimately hit the world’s financials.

As the US are moving toward higher borrowing costs, the banks’ ability to counter speculative risk will be impaired, as the excessive amount of unclaimed liquidity will either trigger a massive devaluation in certain nations’ assets, or fuel major bubbles. In the end, the money-printing in the Eurozone, Japan, and now China, will trigger more shocks to the market, rendering the global financial system nearly helpless before the most routine challenges imaginable.

But for now, bond markets are to watch.