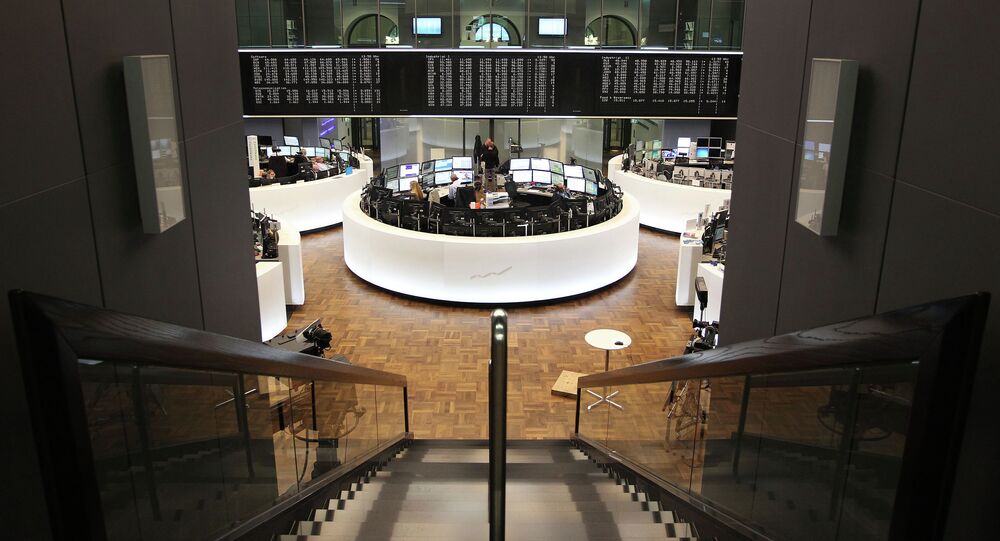 © AP Photo / Richard Drew
US Stocks Heading for Fresh All-Time Highs as Futures Rise on Greece, Data
Kristian Rouz — Demand for the safe-haven German governmental debt papers has been expanding for the second day straight as optimism regarding the Greek debt solution is gradually fading. The Greek concerns have exacerbated after Greece's PM Alexis Tsipras' most recent proposals to resolve the debt deadlock were put into question by both the most radical left-wing Greek lawmakers and several international creditors. Consequently, fixed income papers of the European periphery slumped, pushing up both market volatility and demand for safer assets.

The promise of an agreement between Greece and its creditors is still unclear, and on Wednesday the situation weighed on markets yet again. Spanish bonds retreated, having shed the previous two days' gains — a bitter outcome of this past Monday's promising rally, when the yield on Spanish 10-year bonds fell the most in 12 months amidst hopes for a quick solution to the Greek stalemate.

That said, investment capital rushed for safe haven assets after realizing the deal between Greece and its creditors might be further away than it looked earlier this week.

The Greek PM Tsipras said on Wednesday that certain creditors refused to accept his proposals offered on Monday, having considered them insufficient to overcome the Greek fiscal flaws and the overall weakness of Greece's economy.

"The repeated rejection of equivalent measures by certain institutions never occurred before-neither in Ireland nor Portugal," Tsipras said. "This odd stance seems to indicate that either there is no interest in an agreement or that special interests are being backed."

© Sputnik / Sergey Guneev
Greece's Russian Card: Russo-Greek Gas Deal Likely to Infuriate Brussels
Greek equities and fixed income papers fell on Wednesday in response to the news after having rallied two days straight on the bygone optimism. The ASE Index was 3.6% down, after rising 15% this week. The yield on 2-year Greek debt jumped 0.38%, in line with a greater volatility in periphery markets.

Meanwhile, in Germany, business confidence declined in June for the second consecutive month, attributed mostly to the Greek concerns. The Ifo Institute's Business Climate Index fell to 107.4 from 108.5 in May. The German real economy is expanding robustly due to low unemployment and a weak euro, both supportive factors for the nation's manufacturing. However, the uncertainty stirred by the ever-worsening Greek debt crisis may impair growth prospects for most of the region's advanced nations.

European shares were hit by the renewed Greek concern. In Frankfurt, the DAX Index was 0.8% down, and the euro rose to $1.1193.