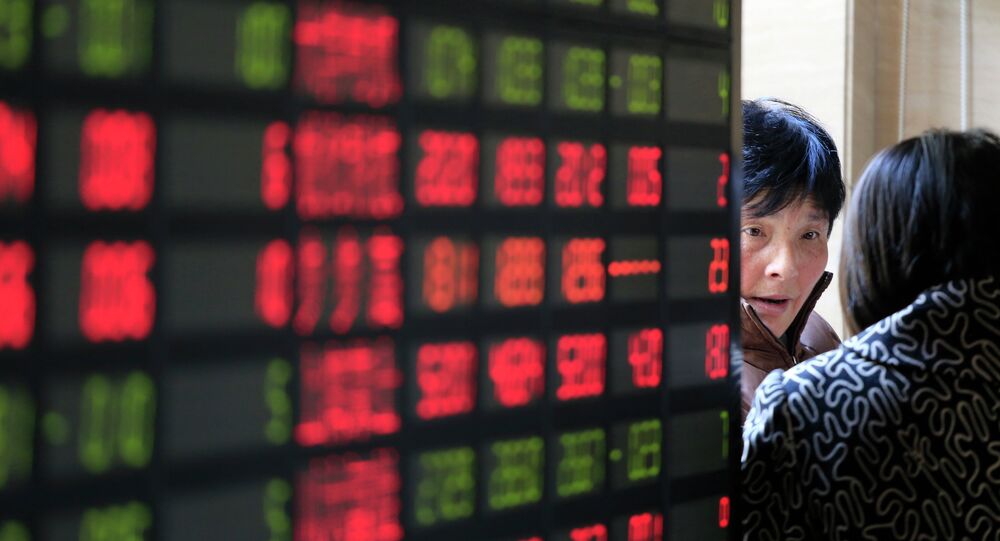 China’s Stocks Retreat Most Since 2008 as Margin Trading Shrinks

Kristian Rouz — Mainland China’s stock markets posted significant losses last week, with the rout in Shanghai and Shenzhen bourses coinciding with the first in roughly four weeks decline in margin trading, while the ever-increasing margin debt has been the driving force behind the stunning advance in Chinese stocks during last 12 months. The question now is whether the overvalued Chinese market is balancing on the verge of a massive stock crash, and if so, what its consequences would be.

© Sputnik / Oleg Lastochkin
Bank of China Becomes First in Asia to Set London Gold Price
The Shanghai Composite Index declined a massive 6.42%, or 306.99 points, to 4,478.36, on Friday, posting monthly losses at 3.85%. It is worth noting that during past 12 months the index skyrocketed some 120.97%, driven chiefly by stocks traded for borrowed money – known as margin trading.

Mainland’s markets were closed Monday due to a holiday.

While margin trading was pushing the mainland’s stocks towards new stunning highs, the expansion in the Communist nation’s real economy has been slowing below the demographically-acceptable yearly gain 8%, standing at just 7% in Q1 2015. That said, not only are the nation’s stock markets overbought, but most equities’ valuations are debt-inflated, while any sustainable support from more solid assets is lacking. Last week most prominently, investors were cashing out of the markets, possibly signaling the payback time is near.

The overall volume of margin debt fell to just below 1.480 trln renminbi (some $238 bln) in Shanghai last Friday from its all-time highest of 1.483 trln renminbi posted the day before. Mainland had lost some $1.3 trln in investment money last week.

This year, the regulative authorities in Beijing have repeatedly attempted to curb margin trading, each time causing major sell-offs in the markets. The inflating trading in stocks for borrowed money is a certain bubble, however, it has been mainland’s only chance to attract investment money into the faltering economy.

At this point, mainland China’s stocks are valued at 92 times earnings, compared to the figure of 68 in 2007 just before the last major crash.

To make things worse, the real economy is not benefitting from the extremely expensive stock markets. In July 2014, the government in Beijing, fearing the then-looming burst of the real estate bubble, encouraged investors to buy into stock instead. While Beijing succeeded in staving off the risk to the real economy then, the over-the-top rally in stocks resulted in the current speculative oversaturation of the Communist nation’s financials.

Meanwhile, most stocks listed in Shanghai and Shenzhen, are retail-based. There are very few purely financial institutions among the key players, like insurers, pension funds or hedge funds, meaning most Chinese stockholders are individuals, prone to awareness-raising manipulation. These people are the first in line to suffer enormous financial losses, should margin trading decrease further.

Mainland’s stock crash might be a consequence of an insignificant event that "comes as an accident, which nobody can really foresee… retail investors, if leveraged, are usually the first group of people… that lose," Vincent Chan of Credit Suisse said.

The decline in margin trading might be such an event, if continued the next several days. In the event that the negative consequences do unravel, all this would mean not only the lost investment, but also the increased indebtedness for the Chinese individuals and businesses. Now, as all of China’s borrowings enjoy the last-resort warranty provided by the central government in Beijing, the latter’s combined debt is then poised to break far above the current 280% GDP, which is a shocking $28 trln.