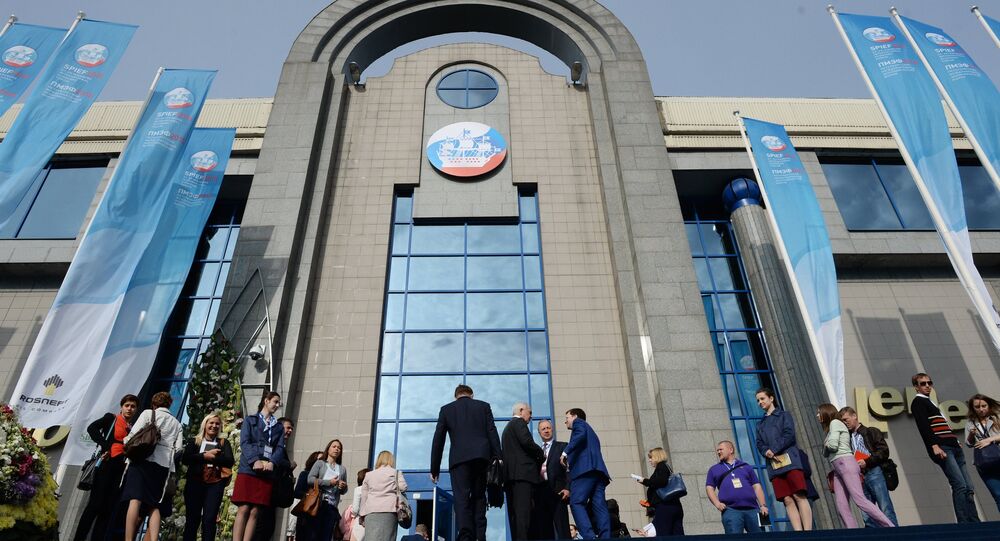 Speaking to Sputnik, German journalist and public relations consultant Christoph Horstel noted that despite attempts by Washington and Berlin to pressure German business not to interact with Russia, they have done so anyway. In his view, this was most recently demonstrated by companies' attendance of the St. Petersburg Economic Forum.

© Sputnik / Alexei Danichev
Number of Companies to Attend St. Petersburg Economic Forum Increasing
Commenting on Thursday's announcement by Russian energy giant Gazprom that it had signed a memorandum with European companies to build a new pipeline to Germany, Horstel told Sputnik that despite systemic pressure on Europe by Washington, and pressure in turn on German business by the German government, the country's influential business groups are not willing to give up their relationship with Russia.

"In spite of this pressure, they go to the St. Petersburg Economic Forum, they meet Mr. Putin, they travel to Russia, they propose new business and investment," Horstel stated, speaking to Radio Sputnik.

By prolonging but not intensifying the sanctions, Horst noted that the Europeans "are trying to appease Washington and not to hurt themselves too much, because what they are in fact doing is hurting themselves a lot, losing billions in trade, losing tens of thousands of jobs."

The analyst emphasized that the problem faced by European governments is that they do not feel themselves to be sovereign. "Washington is the single power calling the shots in Europe, and this is becoming more and more clear all the time," Horstel noted. "Unfortunately, Germany, which is the most important European power, is still a non-sovereign country seventy years after the end of the Second World War."

Arguing that the citizens of European countries want good neighborly relations and normal economic exchange with Russia, Horstel noted that by prolonging the sanctions and agreeing to a confrontational defense posture vis-à-vis Russia, European governments demonstrate that they are "more afraid of Washington than of their own voters."

© Sputnik / Alexei Danichev
EU Sanctions Policy Against Russia 'Suicidal' – Italian Politician
Under present conditions, Horstel remains skeptical about the possibility for the resumption of political dialogue, at least as far as Germany is concerned. The analyst argued that German media and the current political establishment are aimed at shutting down dissenting thought when it comes to Russia, noting that "if you want a real dialogue –if you have any real, constructive proposal, this will be killed immediately by Washington's arm in Europe."

Horstel recalled that when former Brandenburg State Premier Matthias Platzeck suggested last fall that Russia conduct a new vote on Crimea's accession to Russia, aimed at calming any doubts that the will of the Crimean people was heard, "he was nearly killed politically by our media," attacked in a manner unseen in Germany in years. The analyst noted the media attack on Platzeck was aimed with a "political lesson" in mind: "if you dare to venture into the field of constructive dialogue with Russia, you will be severely punished."

EU Unwilling to Develop Ties With Russia Based on Economic Interests