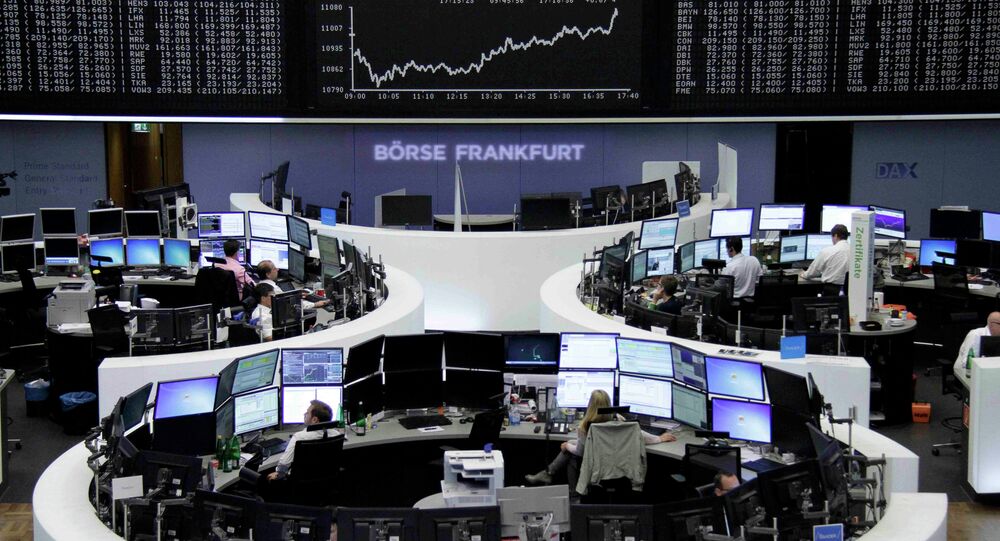 Stock markets outside the US were slightly up on Wednesday, following the previous day’s gains on Wall Street, while currencies and commodities were flat ahead of the Fed policy report.

Kristian Rouz — Stock markets outside the US rallied mostly, while the greenback steadied in overseas trading after the US Federal Reserve hinted at a forthcoming new ‘rate regime' during its ongoing policy meeting. Corporate activity pushed most European shares up. In Asia-Pacific, mainland China extended yesterday's losses due to failed IPOs, and Japan swung up and down, ending the day in the green.

© AP Photo / Thanassis Stavrakis, File
Grexit to Cost the World One Trillion Euros in Losses
Investors are awaiting policy decisions from the US Fed, due later on Wednesday. Meanwhile, today's trading in Asia-Pacific saw modest gains, ending the three-day losing streak in most stocks. The MSCI APEX Index added 0.2% in Tokyo, having retreated as much as 1.2% over the previous two days due to risks stirred by the Greek debt deadlock. The index rebounded from its three-month low, posted yesterday.

Janet Yellen, the US Fed chair, is unlikely to take an overtly hawkish stance on policy tightening, and such an understanding rendered Asia-Pacific investors optimistic, supporting the bull market. Besides, past three days of losses created a situation where there are many stocks that cost slightly below their realistic value. In other words, Asian markets are oversold, and today's gain are mostly a result of natural correction.

In Japan, the broader Topix Index rose 0.3%. Today's trading was dominated by thin volumes and low overall activity in anticipation of the news from across the Pacific. Food producers led gains, while heavy industries, metal manufacturers in particular, posted losses.

"The directionless market is because there are just so many catalysts we're waiting for," Akio Yoshino of  Tokyo-based Amundi Japan Ltd. said. "We want to see what happens with the FOMC, Greece and Europe and whether they come to an agreement, and Japan's growth strategy."

© AFP 2020 / Jewel Samad
US Shares Offset Losses Ahead of Fed due to Mergers Activity
Greek worries eased in Europe, as indicated by the dynamics in fixed income of the volatile periphery. Yields on Spanish and Italian bonds were down after a dramatic rise this past weekend at the height of the most recent episode in Athens' talks with creditors.

Most European shares gained, led by the rally in telecom equities, and the overall favourable corporate environment. The STOXX Europe 600 Index added 0.2%, while the pan-European FTSEurofirst 300 Index rose 0.3%, driven by the 3.9% gains in Telecom Italia, and the 8.7% jump in the drink-maker Remy Cointreau.

The common currency was little changed at $1.1252, near last week's average. Currency markets are lacking any substantial activity ahead of the Fed report, due at 6 pm GMT on Wednesday. The Fed's report will unlikely state September as the decided upon moment for the rate hike, instead, Yellen is expected to speak in terms of a flexible approach and a gradual tightening cycle. The Fed is unlikely to deliver any concrete message on timing, meaning the actual interest hike will happen at the right moment as the regulator imagines it based upon the macro data.

Such an approach has a significant implicit flaw, which is it stirs uncertainty in the markets, which limits substantial capital movements.

In commodities, crude prices were little changed. As demand is getting stronger, so is output due to the ever-rising drilling rig efficiency in North America. US oil price was at $60.11/bbl, while in London, the Brent benchmark traded at $63.78/bbl. Gold sells at $1,180.50/oz, well below the psychological threshold of $1,300/oz, as investors have recently shifted focus to the US and German governmental debt as safer haven assets.