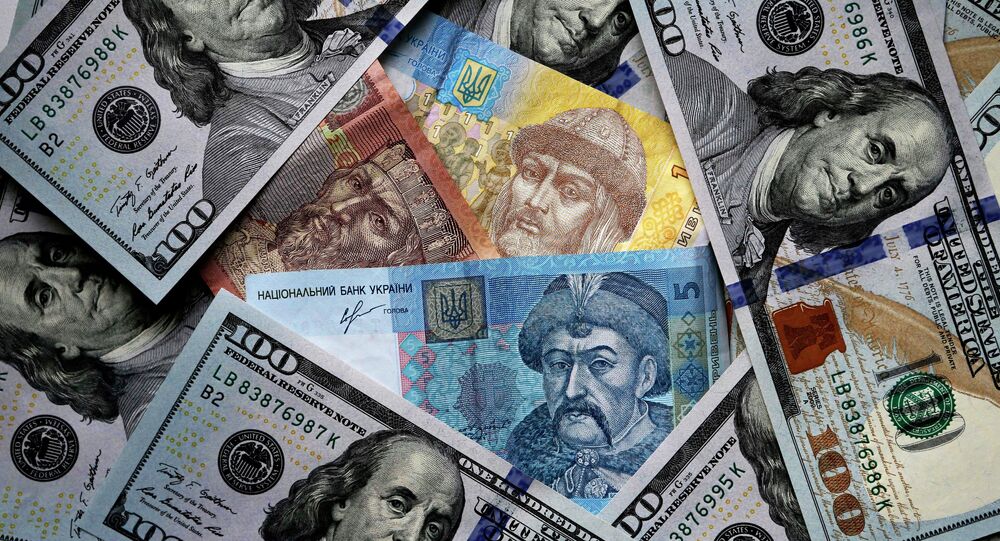 'West' is Not the Charity Business: There'll Be Hell to Pay for Ukraine

While Kiev declares that it would not repay Russia's $3 billion loan or even seize Russia's assets in Ukraine, such moves may deal a heavy blow to the very foundations of international law, US economist Michael Hudson warned.

Regardless of the speculations that the forthcoming Ukrainian default will be just "technical," not an "official" one, Michael Hudson, a research professor of economics at University of Missouri, Kansas City, insists that the euphemism of "technical" default bears no relation to reality — "a default is a default," the economist states.

"A default is a default. The attempted euphemism of 'technical' default came up with regard to the Greek debt in 2012 at the G8 meetings. Geithner and Obama lobbied the IMF and ECB shamelessly to bail out Greece, simply so that it could pay bondholders, because US banks had issued credit default insurance (CDS) against Greek bonds and were on the hook for a big loss if a default occurred," Michael Hudson said in an interview with an American military analyst, the author of the leading blog covering the Ukraine crisis who writes under the alias "The Saker."

© Sputnik / Mikhail Palinchak
Poroshenko Has 'No Chances to Stay in Power for More Than 1.5 Year'
According to the economist, the Ukrainian government cannot reject its financial obligations to Russia, since credit defaults can be initiated only if a debt restructuring is approved by "a governmental authority and a sufficient number of holders of such obligation to bind all holders," according to the International Swaps and Derivatives Association (ISDA).

In April 2015, Russian Finance Minister Anton Siluanov signaled clearly that Russia is the sole final holder of Ukraine's bonds and does not plan to restructure the $3 billion debt.

Professor Hudson stressed that if the International Monetary Fund (IMF) were to state that the Kremlin's $3 billion loan is not official, "this would rewrite international law and mean that loans from Sovereign Wealth funds of any nation (OPEC, Norway, China, etc.) have no international protection."

Furthermore, such a move would have shattered the world's debt markets "along New Cold War lines," "with financial warfare replacing military warfare," the economist underscored, adding that the world is not ready for this.

© AP Photo / Evgeniy Maloletka
Donbass on Brink of Major War, Conflict May Escalate Any Time - DPR
On the other hand, Professor Hudson denounced the decision of Ukraine's Verkhovna Rada to seize Russia's assets in Ukraine as a "radical step" that it is "beyond civil law."

"If Ukraine did this while still receiving IMF, US and Canadian lending, its creditors could be held as responsible," he remarked.

Meanwhile, it seems that the Western financial aid to Ukraine still goes into a "black hole," due to the country's high corruption and lack of transparency. It is highly doubtful though that Washington or Brussels will simply print money and lend it to President Petro Poroshenko endlessly.

"The 'West' is not in the charity business. Its firms do not want to lose money, and the EU Constitution bans the European Central Bank and European taxpayers from financing foreign governments," the economist emphasized.

© Sputnik / Igor Zarembo
Stratfor Warns: S-300 in Ukraine’s Odessa Might Cause All Out War
The present Ukrainian kleptocracy "is not a very safe umbrella" to various economic transactions with the West. Although Western magnates such as George Soros hope to acquire Ukraine's lands and infrastructure via sponsor privatization selloffs, there is still a possibility that future Ukrainian governments may repudiate financial transactions and back out of deals made under "the junta" in the same way "that the Allies cancelled Germany's internal debts in 1947/48 in the currency reform — on the logic that most debts were owed to former Nazis," the professor noted.

"Even Ukraine's debt to the IMF and other international agencies may be rejected as "odious debts" that financed a government at war against its own population," Mr. Hudson elaborated.

In his interview to The Saker, Professor Hudson underscored that the US interventionism and deep involvement in domestic affairs of other countries will eventually do a disservice to Washington.

"US foreign policy is simply "Do what we say, privatize and sell to US buyers, and permit them to avoid paying taxes by transfer pricing and financialization gimmicks, or we will destroy you like we did Libya, Iraq, Syria et al," the professor pointed out, stressing that such an approach will prompt foreign countries to unify into a resistance and to create a viable alternative to American financial hegemony.

The US' selfishness and "the-winner-takes-all" approach is self-defeating, the economist remarked.

‘Shame': How Did New Ukrainian Armored Car Get Its Nickname?