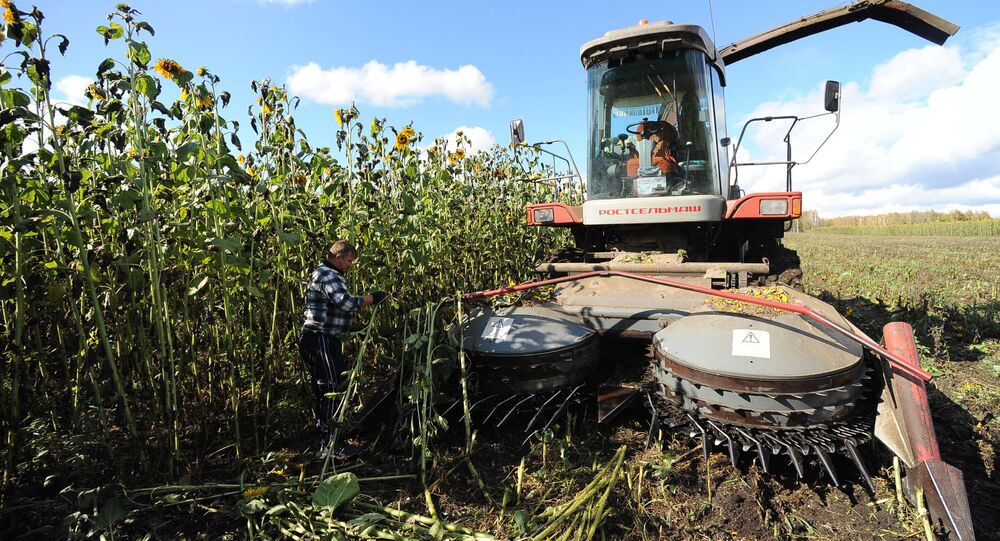 Russia and China will have the possibility to develop their cooperation in the agricultural field to the full extent.

© Sputnik / Taras Litvinenko
Crimea Presents Agricultural, Industrial Projects in Saudi Arabia
The agreement between Russia's Zabaikalsky Territory and Chinese company Huae Sinban to lease 115,000 hectares of Russian farmland to China is not only a major step in agricultural cooperation, but also a perfect example of trust between the two countries, according to an article from the Chinese newspaper Huanqiu Shibao.

The author of the article, Wang Haiyun, is senior advisor at the Chinese Institute for International Strategic Studies.

He believes that now Russia and China will have the possibility to develop to the full extent their cooperation in the agricultural field.

© Sputnik / Aleksey Babushkin
Major Russian Agricultural Equipment Firm Plans 20% Increase in Exports in 2015
The fact that Russian authorities agreed to lease such an immense territory for 49 years proves that Moscow has no ideological prejudice towards Beijing, the article said.

For a long time Russian society believed in the mythical Chinese threat, including economic expansion and territorial claims, the author wrote. The recent agreement shows the high level of mutual confidence between Russia and China.

He stressed the need to "think open" and to eradicate absurd claims that for China agricultural cooperation means territorial expansion.

© Sputnik / Mikhail Voskresensky
Why May China and India Need Russia’s Armata Super Tank?
Expansion is contrary to Chinese cultural values and its policy towards Russia. Expansion allegations are a provocation by unfriendly forces aimed against the blooming Russian-Chinese cooperation, Haiyun concluded.

He also expresses hopes that the agricultural industry will be a perspective field for long-term cooperation between the two countries and would help find a way to resolve the global food crisis.