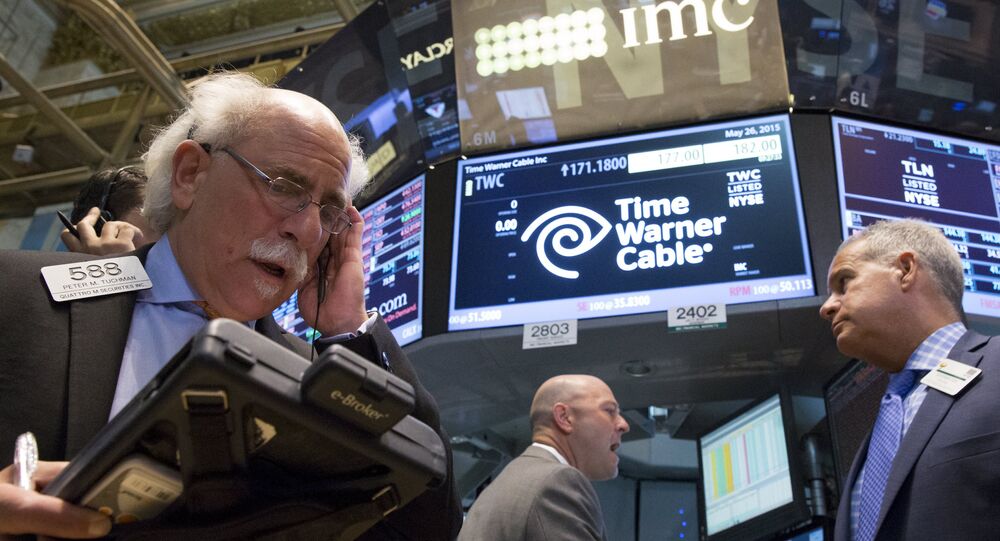 After the US growth in Q1 was revised into negative territory, America’s financials slid into the red; however, the trends are still quite the opposite with optimism prevailing in both the real economy and Wall Street for the second quarter and rest of the year.

Kristian Rouz — According to Friday's revised data, published by the government, the world's biggest economy in fact shrank slightly in the first quarter as opposed to prior estimates, having shown insignificant growth. However, unlike last year, the contraction is not here to stay. A weak Q1 is attributed primarily to the harsh winter conditions, impairing consumer sentiment and manufacturing activity. Among other factors are dockers' strikes all across the West Coast, and the greenback's FX rate, at its multi-year highs, having hurt American enterprises' overseas operations.

© Flickr / Images Money
Will the US Economy Collapse Soon?
US GDP declined an annualized 0.7% in Q1, which is below the earlier estimates indicating a weak growth of 0.2%, as stated by the US government on Friday. The downgrade in growth estimates is explained as a consequence of several minor factors as well, including an increased trade deficit, a lower increase in domestic stockpiles of goods (having risen only $95 bln against the previously reported $110.3 bln) and a slightly weaker-than-expected consumer spending (a rise of 1.8%).

The US trade deficit increased because of a stronger dollar, as American consumers were able to purchase a larger amount of the depreciated foreign-made goods. Domestic inventories decreased due to a pickup in business activity, the results of which are expected  to reveal themselves in Q2.

With sales of new houses having increased, and construction activity building momentum, along with corporate spending (including investment), the first-quarter economic contraction might be explained as a consequence of decreased governmental involvement in the economy, as the US Fed have been taking steps toward ‘normalization' in the US economic activity, which is traditionally driven by private incentives.

On the income side, the US economy added some 1.4% in Q1, driven by domestic demand (consumer spending accounted for 71% of US GDP) and corporate spending on means of production. That said, the negative effects of a stronger dollar combined, hurt the US economy the most.

US shares posted losses on Wall Street during Friday's trading due to the pessimistic data. The Dow retreated 0.84%, the S&P 500 lost 0.63%, while the Nasdaq Index shed 0.55%. These figures are an indication of a minor correction, however, as financial markets are looking forward to the resolution, good or bad, of the Greek debt dilemma, in order to figures out their futures growth strategies. Wall Street at this point is hardly linked to the real economy, more concerned with the global financial outlook.

US debt, meanwhile, rallied somewhat, with 10-year Treasury notes up, and the greenback holding firm.

Another factor of the decline in the US economy is decreased investment in the energy sector as lower crude prices triggered a partial freeze in the shale boom. Capital spending in oil field exploration and drilling slumped 48.6% in Q1, the greatest decline since 2009. However, as opposed to the crisis scenario of six years ago, today's underinvestment is accompanied by a more intensive exploitation of the existing oil wells in the most profitable fields.

The US economy is expected to grow 2% in Q2.

As opposed to the situation in the real economy, US equities fare far better. Th S&P 500 Index added 1.1% in May. Stocks are driven by the abundance of investment money in the financial sector while the rest of world is mired un greater turmoil than the US. An all-time highest worth of announced corporate mergers and acquisitions, totaling $214 bln is an example.

Double Bubble in US Equities and Bonds Sends Market Lower, Along With Fed