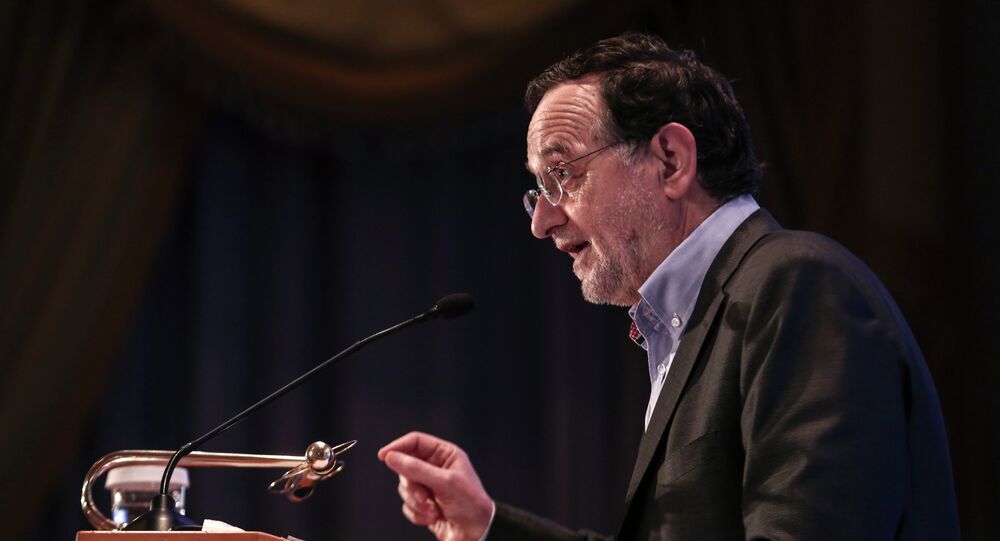 MOSCOW (Sputnik), Anna Liatsou — The minister said that the attitude of Washington would not make Athens change its approach to the project, which, he noted, was beneficial both for Greece and for the whole region.

"Unfortunately, as to the pipeline with the Russian gas, the position of the United States is negative. The US side took this position officially during the recent meeting I personally had with the US official responsible for energy issues," Lafazanis said.

© Sputnik / Taras Litvinenko
Russia's Turkish Stream Project to Kill Two Birds With One Stone
The Turkish Stream is a substitute for the South Stream pipeline project, which Moscow cancelled in December 2014, citing an "unconstructive" stance of the European Union. The pipeline is projected to have an annual capacity of some 63 billion cubic meters and will run from Russia to Turkey across the Black Sea. It will end in a gas hub on the Turkish-Greek border, from where it is planned to continue to southern Europe.

"For all these reasons, we support the pipeline, we want it to be laid across the Greek soil and we are convinced that it would be an input to all the European nations and to Europe as such and we fully disagree with the position of the United States on this issue."

"The Russian pipeline, which will replace the Ukrainian transit road of the natural gas, is absolutely necessary for the energy security in Europe. This means that it has to be welcomed by all the EU member states and by the European peoples who understand the needs of having uninterruptable supplies of cheap natural gas," Panagiotis Lafazanis said.

Russian Energy Minister Alexander Novak said in April that the Turkish Stream may be extended to Austria through Greece, Macedonia, Serbia and Hungary.

© AFP 2021 / ADEM ALTAN
Turkish Stream Could Become Key Gas Pipeline in Southern Europe
Later that month, Gazprom CEO Alexei Miller said that Moscow can guarantee annual supplies of up to 47 billion cubic meters of gas to European customers through gas transit infrastructure that is to be built in Greece.

"Without the pipeline with the Russian natural gas, the demand that exists in Europe cannot be satisfied, especially in Central Europe."

Lafazanis stressed, however, that the proposed Trans Adriatic Pipeline and the Turkish Stream pipeline will not be competitive, as each of them will have an own role to play.

"TAP is a pipeline which will pass through Greece, of course, but it cannot satisfy the huge demands in natural gas of the European states and peoples," Lafazanis said, adding that the project would not be an alternative to the Turkish Stream.

The Greek extension of a pipeline to pump Russian natural gas through Turkey to consumers in southern Europe could cost about 2 billion euros (some $2.2 bln), Greek Energy Minister Panagiotis Lafazanis told Sputnik on Friday.

"We have not discussed yet how exactly the project will be financed. But we already know that the approximate cost of the pipeline will be around 2 billion euros and its construction will create about 20 000 working places," Lafazanis said.

Deal on Turkish Stream Greek Extension May Be Inked in St. Petersburg in June

An agreement on the construction of the Greek extension of a proposed pipeline to pump Russian natural gas through Turkey to consumers in southern Europe could be signed at the St. Petersburg Economic Forum on June 18-20, Greek Energy Minister Panagiotis Lafazanis told Sputnik on Friday.

"Right now we are at the analysis and planning stage. A transnational agreement on the pipeline is at the final stages. We hope it will be signed soon," Lafazanis said.

© AP Photo
Greek PM Plans to Meet With Putin on Sidelines of St.Petersburg Forum
"I do not exclude the possibility of signing the agreement at the Economic Forum in St. Petersburg on June 18-20," the minister clarified.

"Of course, we have given our positive answer to the invitation to the forum. The Greek presence will be very significant. The Greek prime minister will be present at the forum and he will come with a big delegation of ministers," Lafazanis said.

The minister added that it would be the first time when Greece is represented by such a big delegation of senior officials.