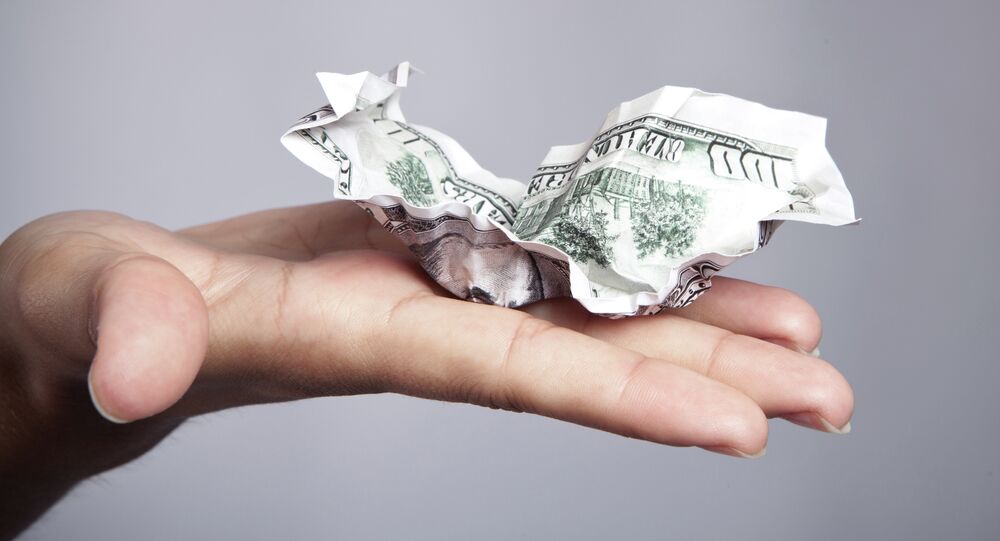 Double Bubble in US Equities and Bonds Sends Market Lower, Along With Fed

Wall Street ended Thursday’s trading in the red as America’s bonds and equities are meeting significant investors’ demand, pushing stock and fixed-income markets far above the real economy, which means there are two bubbles inflating in the US.

Kristian Rouz – US stocks retreated on Thursday, hit by softer performance of most foreign markets, as well as the worrisome news from the US Fed.

San Francisco Fed President spoke out on the future increase in borrowing costs, prompting investors to take profits, as the Fed is perceived as seeing no imminent connection between monetary policy and risks to financial stability. In other words, investors became increasingly concerned upon realizing the US regulator does not care if equities decline as a result of an interest rate hike.

© Flickr / Images Money
Will the US Economy Collapse Soon?
The S&P 500 Index slid 0.1% at the close on Thursday, extending losses to 0.13% overnight. The Dow Industrial Avg ended the day 0.2% lower, and the Nasdaq Composite shed 0.2% as well. There might be a calm on Wall Street as market participants are awaiting new signals from the Fed on their nearest policy steps.

Earlier on Thursday, John Williams, head of Federal Reserve Bank of San Francisco, confirmed previous US Fed chair Janet Yellen’s pledges on an interest hike coming this year, also adding that the regulator is less likely to address risks emerging in the financial sector with monetary policy moves. Investors reinterpreted this information as an acknowledgement of the consciously decreasing Fed’s involvement to equity markets: with bubbles possibly emerging in the overbought US stocks, the government is now reluctant to come to the rescue in case of a market crash.

Most investors are also waiting for the resolution of the Greek crisis in Europe. For US stocks, it does not really matter if Greece comes to a crash and defaults on its debt or reaches an accord with its German masters. Wall Street just needs to see the dynamics in European stocks as soon as the artificial Greek risk evaporates.

“Greece and the Fed are the only two things moving the market right now,” Michael Antonelli of the Milwaukee, MI-based bank RW Baird said.

Unemployment data published on Thursday was not a market factor, as nothing positive or negative happened to the US labour market last month. The number of unemployed rose by a negligible 7,000 up to 282,000 in the third week of May. Number of people having lost their jobs is near al-time lowest.
US home sales rose in April fourth month straight to 9-year highest. On Friday, US Q1 growth estimate could be revised into the negative as the markets are expecting consumer confidence data.

US equities are trading at their all-time highest. In a similar fashion, US fixed-income papers, most prominent of which are the 10-year Treasuries, are also in rife demand, propelling their value. America might be facing a double bubble brewing in its financials, as the virtual economy is aggressively expanding without a substantial support from growth in real economy.

© AP Photo / Richard Drew
Asian Shares Advance as China Steadies After Crash; Eurozone Equities Flat
The Fed’s accommodative policies of the past six years have attracted plentiful investment money into the fixed-income market. Now, with bond prices high and yields low, and base interest rate low, yield can decline to near zero and bond values are hitting their ceiling – and that’s the point where a sell-of in America’s debt may start. In order to stave off this bond bubble, the Fed needs to increase interest slightly, prompting a decline in fixed-income value, with yield going up and volatility increasing.

The problem is, no matter how high the interest may be raised, demand for US debt will still be high, and higher yield will only attract even more money in America’s fixed-income market. That is why the Fed has a room to maneuver and experiment with its monetary policies, exercising various manipulations with the debt bubble.

In stocks, the emerging bubble is harder to control. It is potentially dangerous to the real economy, like the tech bubble of 2000 and mortgage bubble of 2007. Stocks are overvalued now, and the Fed needs to trigger a sell-off in US equities so that market valuation would correspond to the pace of expansion in real economy. Interest hike is a way to achieve such a target, however, as investors sell their stock, they reinvest in bonds. And  that’s where we return to the first bubble.