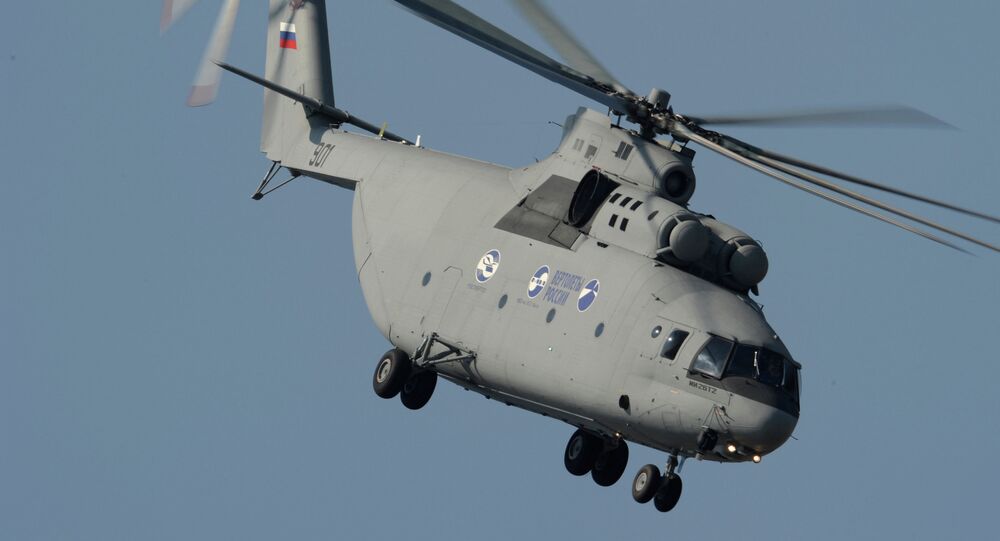 Russian Helicopters has begun mass production of the Mi-26T2, a completely modernized variant of the legendary Mi-26 heavy transport helicopter, a press statement on the company's website reported on Friday.

© Sputnik / Anton Denisov
India Approves Purchase of Some 200 Russian Kamov Helicopters – Reports
The new design by the Russian helicopter design and manufacturing giant is equipped with the latest avionics systems, whose new communications, navigation and systems management will allow for operation with less crew members (from 5 down to 2-3), and for dramatically improved nighttime operation. Moreover, the new design is said to improve on its predecessor's already impressive capabilities in difficult weather conditions and mountainous terrain. Like the Mi-26T, the Mi-26T2 can operate for long periods between maintenance.

Speaking on the occasion of the rollout of the modernized design, Russian Helicopters CEO Andrei Shibitov stated that "Mi-26 helicopters are unparalleled in terms of their flight capabilities, and this modernization significantly expands their potential operational use. I am confident that the Mi-26T2 will see demand, both in Russia and internationally."

The Mi-26T2 features a so-called glass cockpit, which includes five multifunction LCD displays, new control consoles, and upgraded digital communications systems. Onboard video displays offer a clear picture of any cargo which may be attached to the helicopter's external sling during the daytime.

© Sputnik / Vitaliy Ankov
Ukraine Will Not Take Part in Creation of New Russian-Chinese Helicopter
The aircraft's flight control automation system is said to significantly ease the crew's role. The helicopter features new safety features, including early ground proximity warning systems, in-flight situation, obstacle and collision warning systems, and airspace monitoring of a radius of between 9 and 11 km around the helicopter.

For crew comfort, the new helicopter also features air conditioning and heating systems both in the crew and cargo cabins.

The military Mi-26 and its civilian variant, the Mi-26T have been produced by Rostvertol, a Russian Helicopters-owned plant in Rostov-on-Don, since 1980. Developed by the Mil Moscow Design Bureau during the late Soviet period, the Mi-26T was known worldwide for setting cargo transport records, capable of carrying a cargo of up to 20 tons inside its cabin or on an external sling, or up to 90 personnel. With a cruising speed of 255 km/h, the helicopter has a maximum speed of 295 km/h, and a range of 1,920 km.

© Sputnik / Ilia Pitalyev
HeliRussia 2015: Moscow's Helicopter Industry Expo
12
In addition to its transport role, the Mi-26T2 can be equipped for a number of other duties, including fire-fighting, autonomous ground-based refueling, and construction and assembly-related work.

The modernization of the MI-26T2 design was carried out through the late 2000s. The first prototype was delivered by Rostvertol in December 2010, after which the design underwent extensive flight testing.