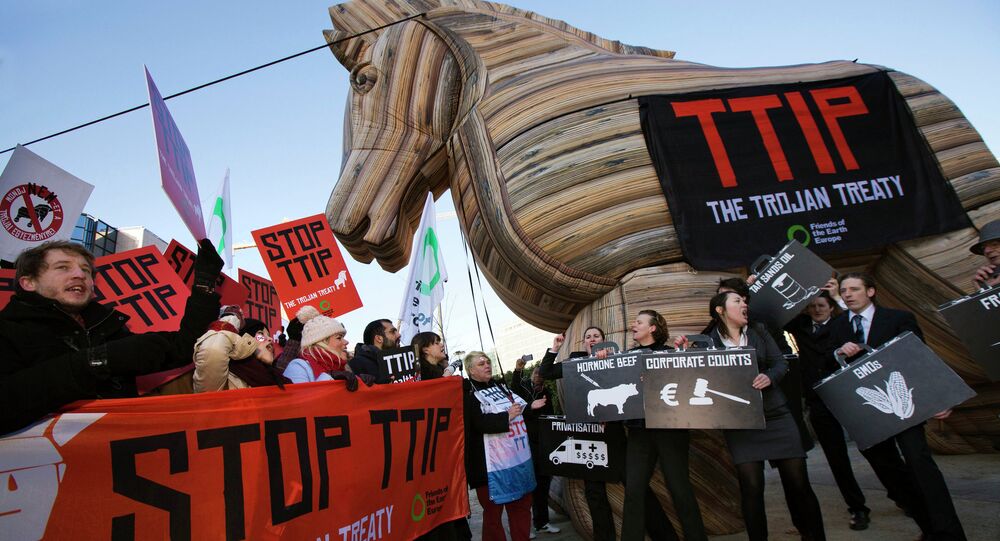 © Flickr / Campact
EU Watchdog Pans TTIP Talks Over Lack of Transparency
MOSCOW (Sputnik) — According to Lola Sanchez, the draft version of the treaty, published in April, contains provisions, which suggest that companies might be able to make legislative proposals.

"It [the TTIP] will allow companies to push forward their own legislative initiatives," Sanchez, a prominent critic of the proposed agreement, told El Publico.

"It [RCB] has to consider legislative initiatives that may be coming from a third party, 'the stakeholders'… Not only will we have to ask the United States for permission to legislate, but also multinational [corporations] will be able to send their legislative initiatives? This is another move to strengthen corporate power," Sanchez said.

© AFP 2021 / JOHN MACDOUGALL
Anti-TTIP Activists Urge EU to Reject US Trade Deal Investment Arbitration
Sanchez noted that the language of the document is extremely vague and open to interpretations, which she considers a danger in itself.

Anti-TTIP activists have repeatedly complained that the deal would benefit big corporations at the same time undermining environmental and labor standards.

In Europe more than 1.7 million people signed a petition against the TTIP and the Comprehensive Economic and Trade Agreement (CETA) – a similar treaty the European Union is discussing with Canada.