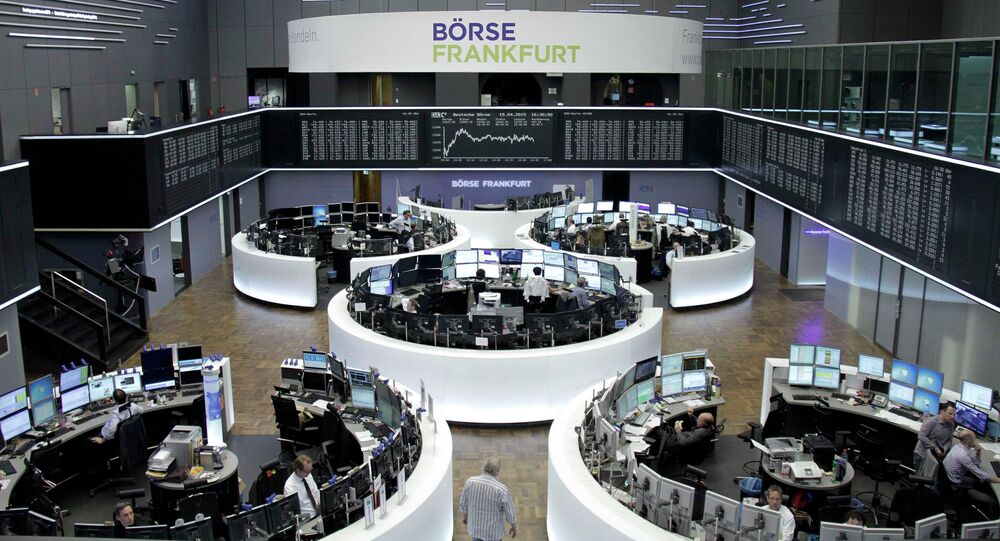 Kristian Rouz — Tuesday's trading in Europe saw most major indices dipping into the red as the Greek negotiating team was reshuffled, while disappointing growth figures from the UK suggest political turbulence in the nation entering its electoral cycle. Adding to the investors' concern, the overnight retreated in American S&P futures and the newly-emerged Asian risks, all contributed to a decline in corporate stocks in Europe.

© REUTERS / Bobby Yip
Next Stage in Global Monetary War: China Close to Stimulus, US Fed Cautious
Similar to the US situation on Monday, losses in Europe on Tuesday were led by healthcare stocks, having suffered the negative impact of the ongoing fall in S&P stock futures. In addition, ahead of the Fed policy meeting, the US dollar slid against the euro, hurting European manufacturers and exporters and also stirring concerns about economic expansion.

In corporate news, a new issue of equities by the German Commerzbank led to a 4.3% decline in its stock. The Frankfurt-based lender is expecting to raise some 1.4 bln euros ($.15 bln) via the emission as institutional investors are expected to be interested in buying into one of Germany's biggest financials.

The Finnnish pulp, timber and paper maker UPM-Kymmene Corp suffered an even greater decline, down 8.5%, weighing on the pan-European FTSEurofirst 300 Index greatly.  The Finnish company underscored its quarterly profits expectations, and the FTSEurofirst shed 1%.

At this point, the broader European index is still 20% above its  January 1 reading, as a significant economic expansion in the Eurozone is a supportive factor. Stimulus measures, introduced by the European Central Bank (ECB) in March, resulted in increased investment returns, luring capital into the region.

In Greece, however, stocks advanced, as the reshuffle in the Greek-EU-IMF negotiations team, undertaken by Athens on Monday, was a bad sign for everyone except Greece.  The ATG Index rose 1.1%, while traders are cautious of the Greek market due to the insufficient progress in talks regarding the nation's debt issue. The overall situation is weighing down other European markets.

In Frankfurt, the DAX Index lost 0.7%, just slightly below its all-time high, while the French CAC 40 Index lost 1%.

One of the biggest winners on Tuesday was the UK's energy giant BP, adding 1.3% after having topped quarterly profits expectations.  However, the overall economic situation has deteriorated in the UK ahead of the next week's major elections, possibly providing the Labour party with the newly-found advantage over the Tory cabinet of PM David Cameron.

© REUTERS / Jonathan Ernst
Wall Street Hit by Losses in Biotech, Health Stocks as GOP Plans Crackdown on Obamacare
Quarterly expansion of the British economy settled at an annualized 0.3%, far below the projected 0.5%, which is a lot, given the size of the UK.

The national election is coming in nine days in the UK, and the Conservatives are now in a losing position. There is a lot of fresh political agenda offered by other political forces in England and all across Great Britain, but the Labour party is in a better position. Despite some allegations, it is very unlikely the UK would exit the EU, as there is neither immediate need nor political traction for such a radical move.