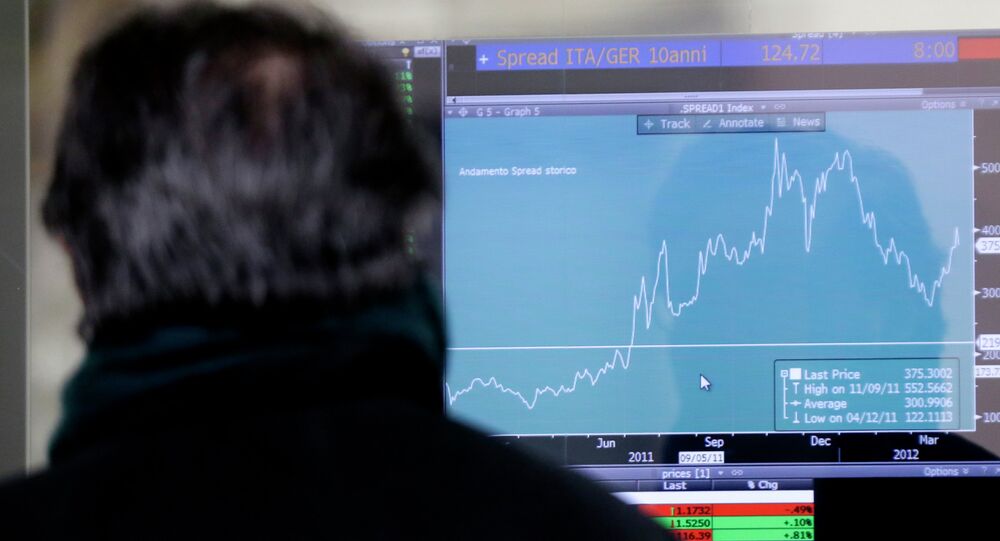 Local social and economic issues and repercussions of the 2008 crisis are among the main reasons for excessive deficit in 12 EU Countries, according to experts.

On Tuesday, the EU statistics agency Eurostat published a report for the year 2014 showing that 12 EU countries charted a higher public deficit than the mandated maximum 3 percent of their gross domestic product (GDP).

Cyprus, Spain, Croatia and the United Kingdom were the biggest spenders, according to Eurostat.

"The main reason is the financial crash of 2008 onwards, which led to an economic downturn in all these countries. The governments had to guarantee the debts of the banks which massively increased their deficits," Daniel Keohane, research director at the FRIDE think tank, said.

French economist Jacques Sapir said there is no single universal reason behind the high deficit figures.

© Flickr / Jillian C. York
Eurozone Has Created a Monster and Caused Greek Exit Chaos
"Actually reasons for a bigger deficit in some EU countries are quite different. Cyprus has to recapitalize its banks, UK wants to promote growth and Spain and Croatia stand in the middle ground between both," said Sapir, who is also director of studies at the French School for Advanced Studies in Social Sciences.

The Eurostat report revealed that debt-ridden Greece brought down its deficit to 3.5 percent in 2014 compared to 12.3 percent in 2013.

"Greece has implemented harsh, even much too harsh fiscal policies since 2010. Actually the Greek budget is displaying a surplus, if we compute it before reimbursements that Greece had to do to its lenders. Asking for more austerity makes no sense, neither for Greece nor for other countries," Sapir said.

However, the FRIDE think tank's Keohane underscored that Greece was still biggest debtor in the eurozone.

© AP Photo / Michael Probst
Germany's Irresponsible Policies Put Eurozone at Risk of Dismantling
"[Greece posted a low deficit] mainly because the level of bank debt was lower in Greece than in the other countries. However, while its current annual deficit figures are better than others, Greece has the highest debt as a percentage of GDP (177%)," Keohane said.

Meanwhile, Sapir also said that the eurozone has consistently displayed a slower growth than other developed countries and called for more investments into the European economy.

"My broadcast for European countries would then be to either agree on a massive investment program badly needed in a number of countries, including Germany, or if no agreement is possible to dissolve the EU and let each country to act by itself," Sapir said.

According to Keohane, the overall trend was positive for the EU economy, but challenges remain.

"The main challenge is to create more economic growth, rather than focus on debt levels," Keohane said.

Overall, the EU-wide government deficit stood at 2.9 percent of GDP in 2014, according to Eurostat. The European Commission is now working on a spring forecast to be published in May.