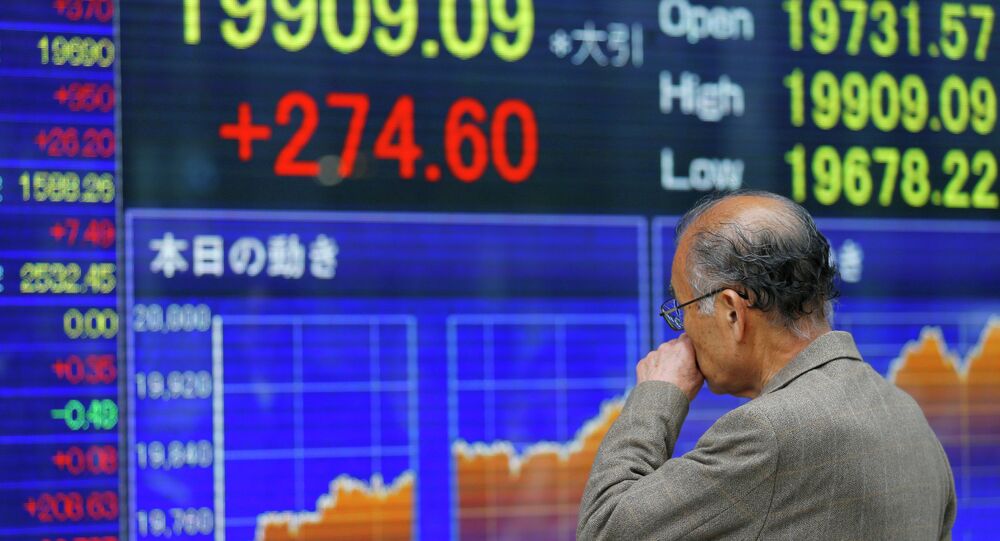 Equity markets in the US and Europe were down amidst concerns stirred by softer data and local risks, while the historic company default in China pushed Asian markets up, awaiting Beijing's stimulus action.

Kristian Rouz — The ongoing earnings season in the US and most of Europe weighed on most stock in their respective regions, with the windfall of corporate data in America rendered investors cautious of the manufacturing sector, while solid biotech gains pushed one of the three major indices up. Europe was affected by the decline of the S&P futures in New York and the everlasting Greek standoff, with investors taking their profits. Asia-Pacific was upbeat, however, with mainland China moving even closer to money-printing and bond-buying, promising to flood the markets with liquidity, while the Japanese zaibatsu posted gains, pushing stocks a little up.

Tuesday's trading on Wall Street was a disappointment as stock generally failed to extend gains of the previous session. The S&P 500 Index closed down 0.2% with seven out of ten sectors suffering losses, with energy and commodities leading the retreat as oil declined after the Saudis ended their military operation in Yemen. The Dow was in the red as well, 0.47% down, with some 20 of its 30 sectors down.

The Nasdaq Composite Index, however, posted gains due to the buyout in biotech shares, having added 0.39% to the near-all-time-high reading at over 5,000 points.

Despite most US companies posting better profit reports, outperforming expectations, Wall Street is experiencing a lot of downward pressure as the overall economic growth is modest, and the dollar is strong, limiting most overseas operations of US firms due to viability issues. Besides, Wall Street might be overvalued at this point, and higher inflation and overall economic expansion are required to provide solid grounds for the market.

Stock trading in Asia-Pacific on Wednesday was a bullish rally, as the People's Bank of China is expected to start buying bonds very soon due to the highest ever financial risk, as evidenced by the first default in a state-owned company.

On Wednesday, Baoding Tianwei Group Co., a subsidiary of Beijing-owned China South Industries Group, defaulted on its debt, unable to pay or service $13.8 mln worth of bond interest. A series of similar defaults are largely expected by the market, as well as Beijing's policy moves to fend off a systemic collapse. The only visible cure would be bond-buying.

Consequently, Asia-Pacific rallied, except Australia and Korea, with Tokyo and Shanghai hitting new highs, the former on domestic earning optimism, the latter on stimulus expectations.

The Nikkei 225 Index surpassed the threshold of 20,000 points, once again setting a fresh 15-year high, ending 1.1% up. Data arrived the same day, showing March exports rising an annualized 8.5% after a 2.5% expansion in February, leaving investors optimistic for the Japanese economy overall. A weaker yen and cheaper energy allowed Japan to achieve a trade surplus for the first time in three years, after the nation was forced to stop its nuclear power generation and boost its oil imports. Wednesday saw  financials and securities in the greatest demand On the Tokyo Stock exchange.

The Shanghai Composite rose 2.44%, while Hong Kong's Hang Seng Index added 0.33% on corporate confidence amidst the exodus of investment from the mainland.

In Europe, shares retreated after a three-day rally, dragged down by the decline in the US S&P 500 futures. The dollar retreated slightly, and a stronger euro is a no-no for the German exporters, rendering investors bearish.

Weaker earnings added to investors' gloomy sentiment after the management firm Compagnie Financière Richemont and the luxury goods company Kering both posted disappointing reports. However, the longer-term outlook for the European market is still bright.

As for the Greek risks, the Mediterranean nation is heading for a default on its debt, despite this the European Central Bank said it would continue to fund Greece's commercial banks if they play by the rules, also adding that Greece would not exit the Eurozone. Consequently, German, Spanish, Italian and French bond yields all fell slightly, scooping the risk for the market.

The euro rose to $1.0750, while in Australia, the local currency advanced 1% against the US dollar to $0.7788 with the Reserve Bank of Australia dismissing further monetary easing.

In commodities, crude oil retreated to $56.13/bbl in the US and $61.65/bbl in London after data arrived showing US oil inventories added an estimated 3.2 mln bbl last week. The easing in the Middle East hostilities also weighed on oil valuation as the Saudis announced they have ended their military operation against the Iran-friendly Houthi militants in Yemen.